What do members of the Yiddish Policemen's Union Eat? 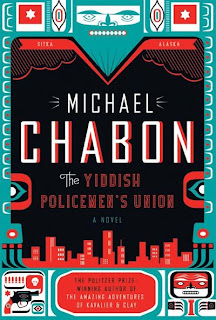 Michael Chabon, in The Yiddish Policemen's Union, has written a bizarre masterpiece. Very bizarre. In a self-contained world located in Sitka, Alaska, live the remnants of Eastern European Jewry. These exiles, who lost the state of Israel in 1948, still speak Yiddish, and still produce wisecracks like one imagines from Borscht Belt comedians -- occasionally about food. Says Detective Meyer Landsman, a key figure in the story: "My Saturday night is like a microwave burrito. Very tough to ruin something that starts out so bad to begin with." (p. 189)

The detectives eat like Borsht Belt vacationers, too. Sometimes. In the police dining room, called the Polar-Shtern Kafeteria, Landsman orders his dinner from Mrs. Nemintziner. She "gentles three tight blintzes onto a white plate with a blue stripe on the rim. To ornament the evening meals of the lonely souls of Sitka, she has prepared several dozen slices of pickled crab apple on lettuce leaves...He heads for the table he prefers... At the next table somebody left a half-eaten plate of corned beef and boiled potatoes and a half-empty glass of what appears to be black-cherry soda." Another patron of this establishment is "working over a plate of herring in cream." (p. 147)

In a seedier venue, a Mrs. Kalushiner had served "a metal bowl filled with pickled tomatoes and cucumbers, a basket of poppy-seed rolls, and a bowl of sour cream" to Landsman and his partner Berko Shemets. (p. 70) At both of these predictably Yiddish meals, the plot advances as the detectives eat and question various people.

But then, we see another side of Yiddish Alaska and its food, a side that goes with the mind-boggling alternate reality:

"The Filipino-style Chinese donut, or shtekeleh, is the great contribution of the District of Sitka to the food lovers of the world. In its present form, it cannot be found in the Philippines. No Chinese trencherman would recognize it as the fruit of his native fry kettles. Like the storm god Yahweh of Sumeria, the shtekeleh was not invented by the Jews, but the world would sport neither God nor the shtekeleh without Jews and their desires. A panatela of fried dough not quite sweet, not quite salty, rolled in sugar, crisp-skinned, tender inside, and honeycombed with air pockets. You sink it in your paper cup of milky tea and close your eyes, and for ten fat seconds, you seem to glimpse the possibility of finer things." (p. 172)

Then there's pie. At an airport far out in the bush, a pie man and his daughter make legendary pie. A piece of cherry pie, mentioned by chance, is a clue on which Landsman solves two mysteries that dominate the plot. (No spoilers here, though -- p. 226-236)

Chabon never blinks. He gives us complete detail on a history that has slued from reality in many unexpected ways. The book is full of smells and tastes; panic and pain; love and hatred. If at any point you think you have learned all about this alternate history, the author comes up with another surprise like this description of a clock: "Looted when Russia fell, then shipped back to Germany, it survived the droping of the atomic bomb on Berlin in 1946 and all the confusions of the time that followed." (p. 136) What? Not only has the state of Israel been destoyed in the 1948 war, and all the Jews who needed it exiled to Alaska, but the end of World War II was also different? Oh, wait. He's making this up.

The first time I read the book, I wrote this: Michael Chabon: The Yiddish Policemen's Union
Posted by Mae Travels at 2:27 PM

I still haven't read this book and really want to. I think I'd better go put it on my cue at the library.