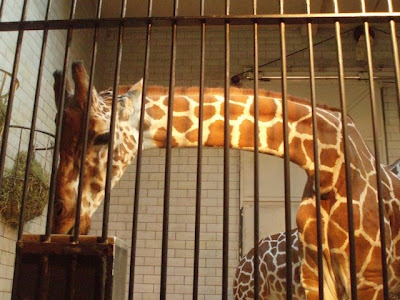 Yesterday we went to the St.Louis Zoo. Some animals are spending the winter indoors, or are not on display, but many of them were outdoors enjoying the warm sunny weather. The smells inside the penguin house and the antelope house were pungent, but not as dramatic as in the summer. The lack of leaves on the trees made the Big Bird House seem a bit bare as well.

This giraffe was the only one that I noticed to be eating, so I picked him or (more likely) her to illustrate my day. I think the adults in the giraffe cage were the mothers of the two baby giraffes were also in the cage -- one is in the second photo. 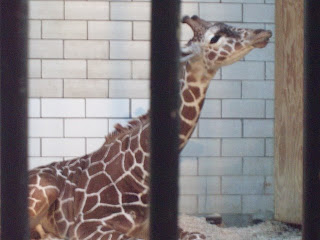 Baby giraffes always seem so awkward in the way their legs fold underneath them. I suspect though that they are actually more flexible than their elders.

Later on today we plan to drive from St.Louis to Oklahoma, breaking our trip to Fort Worth into two days.

I'll post more photos of travel when I have time -- I hope to update Maetravels soon.
Posted by Mae Travels at 9:14 AM