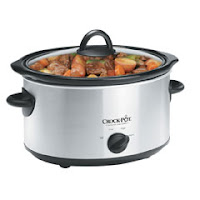 Last Thursday night, after we finished our Thanksgiving dinner, Lenny stripped the meat and put the turkey bones in Aparna's slow cooker. (It's not exactly like the one pictured, but sort of). He added water, sliced onion, carrot, celery, and dried herbs. The stock simmered overnight. In the morning he strained out the bones and we put some leftover pumpkin and wild rice in. For lunch (or dinner, depending on who was eating) we added cold turkey bits to our bowls of turkey pumpkin soup.

Almost any time we roast a chicken, turkey, or (more rarely) a duck, we make slow-cooker stock from the bones -- even at other people's houses. It's so easy and seems so virtuous. There's so much one can do with stock. Made the night before Thanksgiving, stock can serve as basting liquid or a start for the gravy. Last Thanksgiving at Elaine's we made the stock into French onion soup. The year before at Evelyn's I think she added barley or something like that.

It seems ridiculous that something as simple and natural as broth or stock would have a history. But consider this quote: "Centuries before a restaurant was a place to eat... a restaurant was a thing to eat, a restorative broth. ... In the fifteenth century, a recipe for a restaurant began by instructing that a freshly killed capon be cooked in an alchemist's glass kettle with sixty gold ducats, and noted that the cook might supplement the gold pieces with diamonds, rubies, sapphires, jaspers..." A restaurant, you see, meant something that restored you. The quote is from the book The Invention of the Restaurant by Rebecca L. Spang (p. 1). The book traces the history of this idea: that broth was particularly good for you. And so you need special places where, properly prepared, it will easily be available to restore your health -- you could eat a restaurant at a place called a restaurant, especially in Paris.

According to Thirsk's Food in Early Modern England, one of the first published English books to give recipes (in the 1580s) included a stew recipe with stock: "Fair water was used for the broth, with salt and pepper, adding root vegetables in winter (carrots were specifically named) and herbs in summer (....hyssop, thyme and parsley)." (p. 50) Another book from the same era "showed its first concern for a good broth, a subject that loomed large with nearly all subsequent writers. It was started with a piece of beef, plus marrow from bones (a prized delicacy...), dates, a flavouring of mace, pepper, salt, and if wanted, sugar, with verjuice as well, and possibly, but not necessarily, wine. The broth was thickened at the last moment with egg yolks. For white broth herbs from garden and field were the flavouring -- endive, succory, marigolds, marjoram, parsley, thyme and rosemary -- and again dates. Broth for fish used water and yeast with herbs, mace and prunes, verjuice, vinegar, and butter." (p. 51)

Stockmaking is so simple, but it's also an art. In the index of Julia Child's original Mastering the Art of French Cooking the heading "Stock" takes up almost a full column. It covers such topics as "Clarification of," "Degreasing of," "Ingredients for," "Jellied," "Substitutes for," and specific stocks for sauces, fish, etc. She has specific references for chicken, poultry, duck, fish, goose, meat, and veal, and separate indications for white, brown, and canned stock. (Index page xxix)

In Japanese cuisine, stockmaking is just as important -- in the book The Folk Art of Japanese Country Cooking author Gaku Homma dedicates much attention to dashijiru, Japanese stock. "The word dashi directly translated means to 'take out.' In other words, from good ingredients, one can extract good tastes," he writes. "If you asked an old farmer for ... rules he would be surprised: he put dashijiru together without thinking." Every locale had its own version often based on the locally available fish or preserved foods. (p. 76-77)

I think even more than with bread, every cook and expert has a different opinion about the subtleties of stock.

Note: for more about these books see these earlier posts: Japanese Traditional Food and Bread.
Posted by Mae Travels at 11:27 AM

I need to read more about degreasing, other than refrigeration and skimming. On those first nights of soup, I try to skim off fat, but it doesn't always work to my satisfaction.