Bread in England 400 years or so ago was enormously varied. Manchet was a white bread, made with fine wheat flour, and valued by some diners. Others loved barley bread for its dense texture and ability to sop up food when it was used as a trencher. Tastes in bread constantly changed, and also depended on individual location and regions of the country. In the north and in Scotland, people loved oat bread. In London, many bakers supplied diverse tastes. I just learned a lot about bread from rereading Joan Thirsk's book Food in Early Modern England.

Some bakers in this era -- beginning around 1500 -- liked to leaven their bread with barm, a leftover from brewing ale. They bought this from brewers or saved it when brewing at home. To some tastes, the residue from brewing gave the bread an off-taste. Thus some bakers preferred to use sourdough starter. They would leave a bit of dough in the kneading trough, or just scrape up the bits of dough that adhered there, to start the new loaf. Flour and water were mixed with yeast the night before baking, and then left to ferment; the remaining flour was kneaded into the dough in the morning. Gervase Markham, an early food writer (17th C) preferred "barm for manchet but sourdough for ordinary household bread." (p. 232) 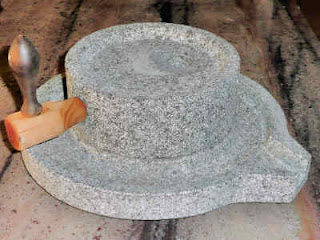 Most bakers' flour came from a miller; millers in many places had a monopoly on grinding grain (and were thus resented mightily). In remote places, kitchens often had a quern in which the bakers or servants ground grain. The quern was a common kitchen tool for grinding other substances in smaller quantities. I found a photo of one on the web, as I was curious what they looked like (right).

Some homes had ovens in which the household's bread was baked. Poorer housewives sometimes baked bread directly on the hearth on a griddle or something similar. Mysterious mentions of "rasping" the exterior of a loaf seem to refer to the process of removing the ash that would form on it on the hearth or in a less-good oven. Some villages had communally shared ovens. Over time, professional bakers became more common. The "assize of bread" (a government body) regulated prices for standard loaves, so bakers devised fancy loaves and priced them higher.

This book is so full of material it seems more like a reference book than a narrative; this time I noted so many ideas about the use of bread. A year ago, when I first read the book, I wrote about manor houses and how they were supplied with food in this post: What would you serve to Queen Elizabeth?

I'm wondering if barm is close to what is used in the Brew bread at Grizzly Peak and the Roadhouse.

I don't know if the process has changed, or if it matters whether you are brewing beer or ale as a source of the starter that can be used for baking bread. I do know that modern yeast is much more controlled than the wild yeast cultures they had to depend on long ago before Pasteur's research and other microbiology discoveries.