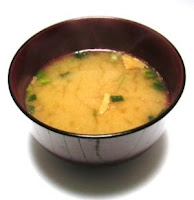 "The term umami was first coined in 1908 by Kikunae Ikeda, a Japanese scientist who was researching the taste of dashi, a stock made from seaweed and used in many Japanese dishes. Ikeda discovered that the secret to the taste was the presence of high levels of an amino acid called glutamate in the stock, which gives it its unique brothy character."

So writes Andrew Shanahan in "The secret ingredient" in the Guardian. This detailed article summarizes the history of the discovery and the make up of this "fifth taste."

Umami in its various chemical forms is found in parmesan cheese, ripe tomatoes, fish, cured meat, the seaweed used to make Japanese dashi, and in meat stock, especially veal. MSG is artificial umami. Unlike the first four flavors -- salt, sour, bitter, and sweet -- umami is hard to isolate or taste when it's not in more complex food. Its presence, evidently, makes food consistently taste more appealing, though MSG is kind of a cheat.

When cooking and eating, I've found that it's interesting and useful to be aware of umami. After a while, though you can't isolate it, you just know it's there.
Posted by Mae Travels at 5:25 PM

You do, indeed, although this taste still flummoxes me to a certain extent, since I can't "isolate" it as easily.