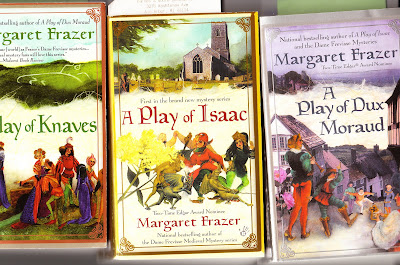 Joliffe -- a playwright, entertainer, and detective unawares -- is the hero of a number of mysteries by Margaret Frazer. Set in the 15th century, the stories are meant to introduce many of the cultural and material conditions of a traveling troop of players in that era. When I've checked out the accuracy, it's usually ok (with occasional boo-boos).

In A Play of Dux Moraud, Joliffe finds himself observing the activities of a number of very shady characters, including a priest, Father Morice. After one conversation, Father Morice heads towards the manor where a very suspicious noble family resides; meanwhile Joliffe heads back to the alehouse where he finds

"the alewife setting bowls of vegetable pottage on the table for the three village men. Aware he and Piers and Gil [fellow players] were going to miss their dinner at the hall, Joliffe asked for some for them, too. -- 'If there's enough?' -- 'There is,' she said. 'The turnips in the upper field did not so badly as everything else this year, and with all the rain the grass has the cows giving plenty of milk for the while.' -- 'Not but what we're getting tired of your milk-and-turnip pottage,' one of the old men muttered between spoonfuls.' -- 'You'd get more tired of being hungry,' the woman said...."(p. 148-149)

Turnips frequently appear in the food bowls or on the coarse bread trenchers of Joliffe and the other players. Frazer, in fact uses them as a kind of indicator of the major challenge of these players: getting enough to eat as they wander around rural England in search of an audience. This turnip-cooking alewife adds basil and a touch of sage (p. 151); others have less skill.
In contrast, when the players are lucky, a lord or master invites them to eat at the manor table. Not, of course at the high table, and not with the kitchen help, but at a table for somewhat higher servants. For example, at one feast Joliffe

"could not see what was carried up the hall to the Penteneys, but what came his way among the lower servants was rabbit in a spiced sauce, a salad of greens, leeks, and garlic, and a date-laden cheesecake, all of it cooked well, nothing scanted or burned or underdone, and all of it in generous portions. Joliffe said something to the household man on his right about how the eating looked to be good here, and the man readily agreed. 'Aye. There's no stinting in this house. They're a good master and mistress, are the Penteneys." (A Play of Isaac, p. 44)

The players' wagon, horse, props, clothing, and the challenges of being on the road are constantly described, with food as one of the indications of their daily struggles and pleasures. Food gauges the character of hosts and the attitude of people of all standings in the complex medieval social hierarchy. A gift of a meat pie, a shared portion of spice cake, a cup of cider or ale, all inform the reader of the conditions for Joliffe's clever and brilliant questioning. And in every book, there's a murder of some sort for him to question about and solve, aiding the authorities in solving many a crime and bringing the guilty to justice.

So many mystery writers -- so many ways to make food do a variety of jobs. I'm still guest blogging about food in other mystery writers' work, over at Postcard Mysteries.
Posted by Mae Travels at 12:46 PM

This sounds like an interesting mystery series. I need more time to read - I just got Fortune Cookie Chronicles and Secret Policemen's... etc. from the library from your reviews.

I hope you like the two books that I influenced you to get -- luckily, taking a book out of the library isn't a big risk. Blog about them when you've read them!!