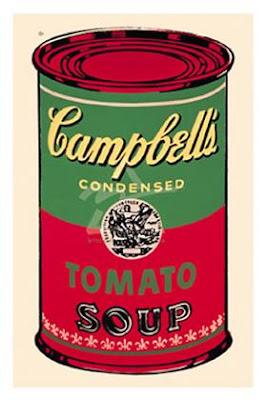 Saturday we visited the Andy Warhol Museum in Pittsburgh. The top floor of the museum (which has 7 floors plus a basement) illustrates the images that Warhol took off from. It's full of kitchen gadgets and their packaging, as well as examples of his early work as a commercial artist. A TV set even plays the Veg-o-Matic commercials from the 1950s. Plastic food storage containers decorated with red flowers, ads for things like knives, and all kinds of food prep images are included. I think the objects are from Warhol's extraordinary collections of stuff. (I remember after he died that a lot of it was sold, but there's so much...)

On the next couple of floors going down, one sees what he did with these ideas -- there's much more in this imagery than just Campbell's Soup cans and plywood boxes painstakingly painted with logos to look like they came from Heinz, General Foods, or Campbells! I don't have anything profound to say, since someone else no doubt said it 40 years ago, though I do remember the first time I ever saw any Pop Art at a museum in Amsterdam in the 1960s. Every time I see this, I feel again that the grocery store is a wealth of visuals.

My conclusion is that the art seems to have very little to do with actual food or with eating it -- just with selling it. Interesting.
Posted by Mae Travels at 4:26 PM

That museum has been on my list of places to visit for quite some time, so I'm glad to read your review of it. I seem to like Andy Warhol much more as time goes by than I did when he was making these iconic artworks and being a personality.

I think that may be true of the actual food, too - it wasn't so much about the creating of it, as it was about the selling of it in mass quantities.