"Where the Wild Ladies Are" 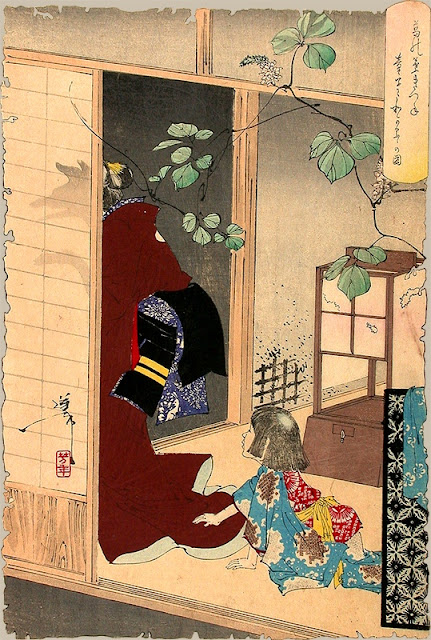 Foxes become spirits, ghosts, or demons in Japanese folklore, in traditional prints, and Noh and Kabuki dramas. A modern story collection reworking many Japanese ghost tales is by Aoko Matsuda, titled Where the Wild Ladies Are (published in Japanese in 2016, translation into English 2020). I love reading these stories! 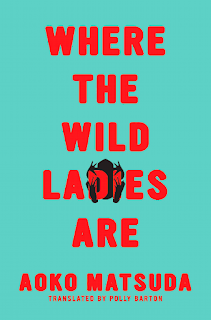 Somehow Matsuda manages to modernize these exotic tales, making delightful little vignettes where modern life meets folklore. I know only a little about Japanese folk tales, but my impression here is that the retellings borrow the emotions and the characterizations from traditional supernatural tales and dramas, applying the essence to twenty-first century Japanese individuals.
Ghosts can play a role in twenty-first century problems; they become relevant to workplace issues, loneliness, depression, bereavement, family relationships, and other challenges. At the end of the story collection, Matsuda includes a brief summary of the tales that inspired each story, which is some help in seeing what she had in mind. However, it's much more fun to find reproductions online of prints and drawings of the various supernatural characters in the tales.
A range of emotional states, intensified by supernatural beings, seem to work out in modern life just the way that they work in folk tales. Other-worldly creatures, such as the fox in the above image, enable Matsuda to create a very interesting version of Japanese society, and especially to highlight the limitations that society puts on women in modern Japan. I was especially fascinated by one character named Mr. Tei, who appears in several stories. He explains "I don’t know why, but the living and the dead have always looked exactly the same to me." And of course he can see both living and dead people, and he plays a role in several ghostly situations. (p. 190).
Being fascinated by the use of food in literature, I especially enjoyed the love of food shown by the ghosts and supernatural creatures of Where the Wild Ladies Are. The following are just few quotes from the many times the spirits and the living experience a variety of foods. There's much, much more.
A story about two mysterious ladies who visit a man alone during the summer ghost festival called Obon:

"Just then, Shinzaburō’s eyes fell on three steaming cups of green tea placed on the coffee table. Did I go and make tea without realizing it? he thought. Surely these two didn’t sneak into the kitchen and make it themselves? What’s more, he noticed that the yōkan [red bean-paste jelly] he’d been saving for a special occasion was there too, cut into neat slices." (pp. 40-41).

About a water spirit called Hina-chan:

"Rather than buying my lunch from the convenience store, which inevitably means getting by on soggy pasta or rice balls shaped into triangles by machines rather than hands, I’ve started taking my own lunch boxes in as often as I can. It feels to me as if the badly formed omelettes and grilled salmon fillets and florets of steamed broccoli I make at home to bring to the office all contain Hina-chan’s love. By eating my homemade food at work, I can be together with Hina-chan during the day too." (p. 69).

"At this moment, Hina-chan is lying on the sofa, her head resting on my knees and her eyes glued to the TV, munching away mindlessly at a bowl of avocado-flavored tortilla chips. I stroke her fine, silken hair, and think how deeply I adore her." (p. 82).

Thoughts of an irrationally jealous and violent woman, maybe possessed:

"You take up a large daikon and whirl it around you like a baseball bat. When you bring it crashing down on the table, the daikon— which must have been softer than you thought— breaks into pieces, like a slow-motion video. Doubtless you will use some of these in tonight’s dinner— they’re the perfect size for simmering. As you squeeze out every last drop of ink from a raw squid, you even have time to think that you’ll combine the two, make ika-daikon.

"Next, your eyes land on the cardboard box of apples that your parents sent over from their garden. You take them out and wrench them apart with your bare hands. Later you can make them into jam, or bake them in a pie, or mix them into macaroni salad— apples are surprisingly varied in their uses. You focus on channeling all your power into your fingers as they tear through the glossy skins." (pp. 90-91).

A man employed by a very mysterious company that makes an incense with a power that somehow he can't grasp:

"At lunch the other day, he’d asked the women there about it, but they’d giggled and avoided answering the question. Shoveling down his katsu curry, Shigeru then asked the other question that had been on his mind. 'Don’t you think this company’s a bit weird sometimes?' ...

"'Well, companies are weird, aren’t they,' one of the ladies said after a pause, as she gobbled up the broad strip of deep-fried tofu sitting on top of her kitsune udon. Her slanted eyes and narrow face had a vulpine quality to them, Shigeru noted. And come to think of it, weren’t the kitsune— the fox spirits capable of transforming themselves into humans— supposed to love deep-fried tofu above all other foods? Wasn’t that, in fact, where the dish had got its name? But he brushed off these thoughts as quickly as they had come to him." (pp. 116-117).

Japanese prints depicting a variety of ghosts, demons, possessed spirits, playful or harmful supernaturally endowed animals (especially foxes) and more are the main source of my familiarity with the creatures in Where the Wild Ladies Are, and I enjoyed looking up many images as I read. I believe that the same wellspring of folklore also inspired the ghostly characters in Miazaki's film "Spirited Away." A few more images: 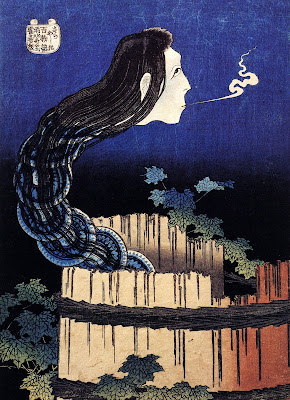 Okiku, a ghost woman who lives in a well, appears in several stories.
Image by Hokusai (source). 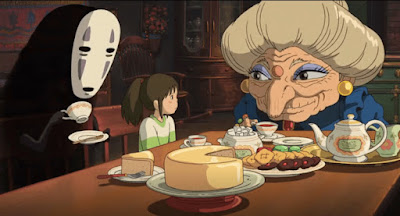 From "Spirited Away" -- Chihro, the human girl, with two supernatural creatures. 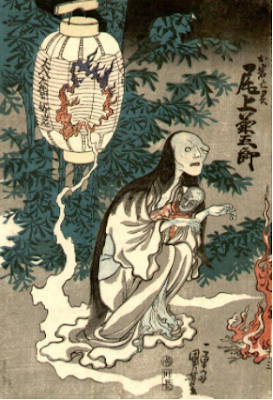 This sounds fascinating. I red a teen book a couple of years ago where the hero becomes a fox. And after visiting some shrines in Japan, I feel like I know a little bit about the culture. I am going to add this to my wish list. I am also reading a book about Japan right now. The Sakura Obsession? Have you read it? It is a non-fiction book about an Englishman and his obsession with the Japanese cherries trees, but really about Japan too and written by a Japanese author (who is married to an Englishman). I am really enjoying it.

I love all the prints. I hate to add another book to my "to-read" list, but maybe. :)

Some of the prints are disturbing, while others are quite informative. I enjoyed your take on this book. And now I want to learn where the wild ladies are!

Your food choice quotes tell so much. I've not read any Japanese folklore stories.

Perfect for my Japanese literature challenge, thanks ! I love those prints and the Chihiro picture :)

I enjoy the Japanese stories, the Japanese films based on them, and the modern anime. Their ghosts aren't like the ghosts I grew up with.

I plan to join in the Japanese Literature Challenge that runs from January to March. This might be a good choice.