"Shed No Tears" by Caz Frear 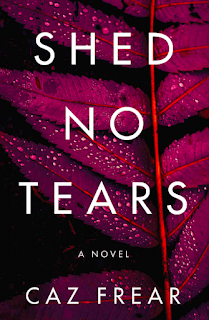 Cat Kinsella, the young sleuth who narrates three police procedural novels by Caz Frear, sometimes reminds me of Nancy Drew, the original Girl Sleuth. She's earnest and bright, she has a boyfriend who doesn't play much of a role in her sleuthing (even less than Nancy's beau Ned), she doesn't have much of a domestic life, and she gets very involved in her detecting. I think I like reading the Cat Kinsella books now as much as I liked reading Nancy Drew mysteries in my childhood.

Enough nostalgia for Nancy Drew. Let's talk about Shed No Tears, the latest of Frear's three books, released last week. Unlike Nancy Drew, whose father is a criminal lawyer, Cat Kinsella's father is a criminal. This makes her uneasy about her identity as a police officer. Her inappropriate family is always trying to draw her back to her roots, and in this book, they do play a role, which works right into the plot without being a digression. That's a good thing!

As always, I like to see what detectives eat, and what the criminals eat as well. The detectives in Cat Kinsella's police station eat whatever they can get in the course of the suspenseful and action-filled investigation. It's a very hot summer, and Cat is constantly suffering from the heat: there's no air conditioning in London offices or apartments, and this creates part of the high-pressure atmosphere in which they work. Some of the other officers make it hard as well, as Cat and her close co-workers find them very off-putting, such as Peters, who eats a bacon brioche in a morning meeting, and another named Blake:

Being so busy that they have little time for real meals is an indication of how tightly wound the author makes their police business. For example, her co-worker Parnell hasn't had time for a meal, but:

"Parnell’s leaning against the windowsill, eating a Kit Kat from the vending machine. He was all set to finish Peters’ stone-cold brioche until he saw the look on my face and tossed it in the bin." (Kindle Locations 2769-2770).

A while later, Parnell shares a "finger" of the Kit Kat with Cat. Then the two of them pay a visit to the home of a mob personality of interest, who is ostentatiously baking cookies, obviously a pose:

"He picks up a wire rack of cookies. “You want one?” I’d love one. In fact, I’d love the whole batch. It’s been a long old morning on just a quarter of a Kit Kat, and my stomach thinks my throat’s been cut, as Parnell is fond of saying." (Kindle Locations 2861-2863).

Later, during a long session with various colleagues, Cat encounters another vending machine:

"Craving solitude, I detour to the bathroom, then the vending machine, then I snag a rare patch of shade at the back of the station, guzzling down a can of Fanta while checking messages on my phone."(Kindle Locations 4935-4936).

Finally, the suspect -- no longer baking cookies -- is in custody, and they have this interchange about a fancy restaurant where he was involved in questionable activities:

“Eight o’clock-long day, huh?” I say, as casual as a colleague at the end of a hard shift. “Are you feeling OK, Simon? Did you get something to eat?”
“I got something, yeah. Couldn’t tell you what it was though.
“Not exactly La Trompette,” Parnell says with undisguised pleasure. “By the way, you didn’t mention you kept an office there. We’ve got a search team over there right now.”
“Have you?” He adjusts his cufflinks, eyes lowered. “Well, if they’re stopping for a late supper—’ cos I’d say searching’s hungry work— I recommend the baked lobster tails and the tarte tatin for afters. Best in London.” He looks up. “Of course, what I’d really recommend is saving yourselves the overtime bill. You’ll find nothing.” (Kindle Locations 5018-5024).

Cat several times stands up her boyfriend Aiden when she's supposed to have a picnic or other meal with him. They do eat one not-particularly-memorable dinner in a restaurant -- when she arrives, he has already ordered “Bruschetta and penne something" for her, but she has to wait a long time while eating only breadsticks. Truly unmemorable food! (Kindle Location 2452).

Finally, there's one sad scene at the very end, in a high-priced nursing home where a retired officer is staying. Cat unconvincingly tells him he'll soon be going home, though the opposite is clear:

“And to what?” he says, without a shred of self-pity. “Sure, I’m better off in here. I’ve company. The mattress is a damn sight better than the one I have at home. And I get to eat . . .” He turns slowly, very slowly, picking a fancy embossed menu off the nightstand. “Cajun-spiced chicken with corn and pumpkin hash, instead of something-on-toast every night. (Kindle Locations 5350-5353).

Shed No Tears has been on my wish list for months. I'm glad I finally got to read it. I'm quite fond of Cat and her attitudes towards her family, her fellow police officers, her problematic family, and her boyfriend. I'll be happy in a couple of years when I expect to read another sequel. I blogged about Caz Frear's earlier Cat Kinsella novels, here: Sweet Little Lies, and here: Stone Cold Heart. This blog post is copyright © 2020 by mae sander for mae food dot blog spot dot com.

Glad to have another detective to add to my pandemic-avoidance stay-at-home reading list. It's interesting that there are so many female detectives in fiction. If my Googling is correct, in real life approximately 12% of officers in the U.S. are female, and 30% in the U.K. Seems like a much higher percentage in the books I've read.

I never read Nancy Drew, but this detective sounds like one I'd enjoy. Thanks for the quotes :)

This looks like a fun series with a great central character. Thanks for the excerpts and the recommendation!

I haven't read any of these but they sound like fun. Thanks for the recommendation.

This sounds like a book I would enjoy. Thanks for the review Mae.

A bruschetta is worth the wait, such a man maybe not?
Oh. Hopefully we can afford such a home once we´ve reached that age...

I love reading your book reviews. Food and books__-even better!

I'm going to have to look up this series. Sounds like it is my kind of book.