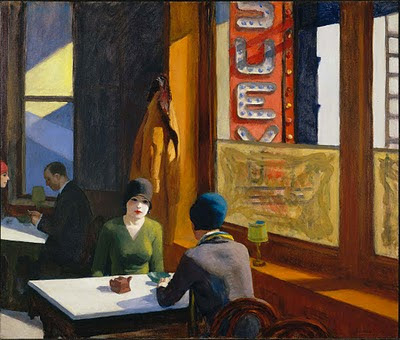 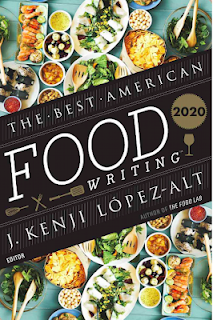 Yesterday I wrote a review of the book The Best American Food Writing 2020, a collection of short pieces from a variety of online and print magazines, predominantly The New Yorker, New York Times, Eater, and Serious Eats. I mentioned that a recurring theme in these writings was authenticity, which is introduced in the foreword to the collection:

"Stories about people, places, authenticity, and the rich diversity of America’s food scene seemed particularly relevant as the question of what it means to be American has been at the core of recent politics."

The idea of authentic tacos, authentic Chinese food, authentic Soul Food, and other authentic ethnic cuisine is debated, along with the idea of cultural appropriation -- which means white people making ethnic food (authentic or not) and using their economic advantages to finance their efforts, thus edging out the ethnic people who are poorer and don't have those advantages. Several buzz words or a "signifiers," make up a food writing vocabulary that speaks "to a contemporary antibourgeois bourgeois culture that selects for 'authenticity,' 'mindfulness,' and 'transparency'" (p. 207).

Chinese food is especially subject to disputes over  what is "authentic." The essay by Dan Nosowitz, "What the Heck Is Crab Rangoon Anyway?" explores this topic in a most interesting way. His view:

"Crab rangoon is not inauthentic, and you should not be embarrassed to order it. American Chinese food is its own cuisine, with its own staples and a reasonably long and fascinating history. There’s a fundamental problem with the concept of authenticity in food, because cuisine is constantly mutating and adapting to new ingredients, new people, new techniques, and new ideas. Mexican food would be completely different without the influence of the Spanish and Arab immigrants and colonists; the tomato is not native to Italy; the chili pepper is not native to Thailand. There are old dishes and there are newer dishes, and that can be an interesting distinction. And there is tasty food and lousy food, but using some concept of authenticity alone as a criteria is a flawed approach." (p. 225).

The essay by José R. Rala called "The Demand for 'Authenticity' Is Threatening Kansas City’s Homegrown Tacos" is a discussion of a particular type of tacos that emerged in Kansas City years ago, but is now viewed as inauthentic. However these tacos have a convincing history in the long-established Mexican immigrant community of the area. In 1958 the Spanish Gardens Taco House was opened by a member of this community. "On the restaurant’s menu were enchiladas, tamales, chili, and a regional specialty that developed as a result of the proximity of the area’s Italian and Mexican communities: fried tacos topped with a ketchup-like 'taco sauce' and Parmesan cheese." They were rolled, fastened with a toothpick, and fried. "The popularity of crunchy, toothpick-sealed Kansas City tacos only rose throughout the 1960s and ’70s." Now, thanks to Yelp, these taco places are much less popular, due in part to "the viral nature of media like Yelp reviews that claim the taco is not truly Mexican." (p. 76).

Indeed, Yelp reviewers turn out to be a major proponent of a particularly vile use of the concept of what is authentic, specifically, in propagating a particularly racist view of ethnic restaurants. In Sara Kay's research report, she makes this case very convincingly: "Yelp Reviewers’ Authenticity Fetish Is White Supremacy in Action." She writes:

"The term 'authenticity' is everywhere. Pundits claim that millennials crave it, restaurants boast authentic dining experiences, and Foursquare asks us to make judgments about it. These claims, often used as markers of quality, are employed by diners and restaurateurs alike— often used by owners to evoke a homespun or faraway romanticism. Nowhere does that come into play more than on user-based review sites like Yelp." (p. 230).

"When reviewers picture authenticity in ethnic food, they mentally reference all the experiences they’ve had before with that cuisine and the people who make it— and most of the time, reviewers view those experiences, whether from personal interaction or from interacting with media, as not positive. Reviews tend to reflect the racism already existing in the world; people’s biases come into play. According to my data, the average Yelp reviewer connotes 'authentic' with characteristics such as dirt floors, plastic stools, and other patrons who are nonwhite, when reviewing non-European restaurants." (p. 231).

"And when reviewers use 'authentic,' they put unfair expectations on restaurateurs to maintain a low set of standards for their establishment— much lower than any restaurant serving Western cuisines. The language directly supports a hierarchy where white, Western cuisine is allowed more creative latitude to expand, explore, and generate profits than its non-Western counterparts. The use of 'authenticity' in the dining landscape is counterintuitive. Its usage to promote white supremacist norms furthers an atmosphere that’s antithetical to the spirit of authenticity. The language of authenticity holds up the supremely inauthentic— a single ideology that supports possibly the most powerful social group: white people." (pp. 233-236).

Several other essays in Best American Food Writing 2020 also touch on the development of "authenticity" as a way to critique foods and restaurants. For some time, I've been very suspicious of the way this idea is used -- I've written a number of blog posts about other discussions of the topic, particularly on the subject of American Chinese food and Chop Suey Restaurants of the early 20th century (especially this one: What is authentic?) I've therefore found the theme of "authenticity" in this book particularly interesting.

Also interesting but outside the realm of "food writing" -- a number of food shows on Netflix seem obsessed with authenticity of various cuisines. Many episodes of Chef's Table created by David Gelb, Ugly Delicious with David Chang, the Taco Chronicles, and probably others emphasize the "authenticity" of whatever cuisine they are covering -- and they cover a lot! I especially remember one episode where three of the major explorers of "authentic" cuisine gathered at the same time: the late Jonathan Gold, Gustavo Arellano, and David Chang.

Reading this post, I thought about the delicious toasted ravioli that are a St Louis specialty. Who cares if they are authentic?

Good point, Elaine...Toasted ravioli were definitely authentic St.Louis food. When the industrial food behemoth (I forget which one) researched what Americans believed to be Italian food, they chose toasted ravioli as seemingly the real thing and put them on the menu at Olive Garden (I don't know if they are still on the menu). That's how to find out what's authentic: do market research about people's expectations. It also reinforces stereotypes and harmful bigotry.

Yelp seems to be a dangerous tool! Why can't food be good because you like it, rather than because it's authentic? Seems that's all that should matter.

I had a Chinese friend who told me restaurants serve Chinese food that pleases the American palate. I remember one time a bird flew into their home and they caught and prepared it for their dinner that evening. Now THAT was authentic. I remember being in LA, and avoiding Chinatown (which was not as built up as SF). I found a restaurant where the locals ate. The entire menu was in Chinese and I needed an interpreter, but admit it was the best Chinese food I've ever tasted in my life.

I also have trouble with authentic Mexican food in restaurants. My favorite is Chilies Relleno, but you wouldn't believe how very different many restaurants create them. Some add chicken, some smother them in a disgusting red sauce, and some fix them like my Mexican friends fix theirs. Spanish rice, on the other hand is never fixed right in any restaurant I've ever been in.

Good post, but I admit, I've never eaten in any "authentic" high end restaurants that might be mentioned in those book reviews.

Yes, Elizabeth is (sadly) right. Especially Chinese food went crap over here, or... "German". Same as Pizza, to "the German" taste.
I had a customer, he knew we went to Tuscany and he said he had the most horrible pizza in a restaurant with his very disappointed (Chinese) husband.
Yes. Don´t go to a restaurant in a tourist region! We always had something from the little stands, authentic and YUMMY.

I always loved to watch how Anthony Bourdain went out on authentic food, loved his books, also.

Is there anything about food culture that is truly authentic? It seems similar to the focus on native plants in the naturalist community. Aren't we terribly influenced by others and hasn't this always been so? To offer an example, I bring up my mother's emphasis on her Franchini family's Italian heritage. After a little research, I learned that those with the root of "Franch" in their name are actually folks who wandered into Italy from northern regions of Europe! I wish we'd stop trying to put everyone and everything into a little box. Of course this rant could just be my way of sounding off for feeling like I have no roots, no ethnicity, no culture.

What a thoughtful and interesting post, Mae. I remember our friend Giorgio visiting from Italy and he didn't recognize American pizza as pizza and the pasta dish he made was quite different in texture. Same with my Italian neighbor. I don't know much about Chinese by comparison but it makes sense. To me, I don't care if it's authentic. As long as it is tasty!

I don't know "authentic" when it comes to food, but I do know what I like. That'll have to do for me, and the food critics can talk about the finer points without me ;)

This is a book on my holds list at the library. I look forward to getting it.