"The world has changed so much so fast since the pieces in this volume were written and published that I’m convinced the book will read like a time capsule." -- Silvia Killingsworth, Foreword to The Best American Food Writing 2020, published November 2020. 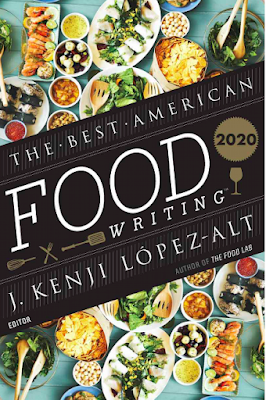 Reading this year's Best American Food Writing is indeed like looking at a time capsule. The book has a lot of great articles, though I was frustrated by the large number from the online magazines Eater and Serious Eats because I have already read them. Although it's a very good collection, it really does reinforce my sense that I am in some kind of terrible purgatory, alienated from the world that I have known most of my life.

The republished essay that most totally brought home my alienation was about grocery stores, and an effort (pre-pandemic, of course) to make them more attractive to shoppers. Many people have been switching to big-box stores like Walmart, to farmers' markets or boutique-type shops, to online shopping, or elsewhere, and store owners feel the pressure to do something. Author Joe Fassler wrote "The Man Who’s Going to Save Your Neighborhood Grocery Store" about Kevin Kelley, an architect who was redesigning the grocery-store concept for a few ambitious grocery owners. Fassler explained the challenges to the traditional grocery business -- for example how "Americans started cooking at home less and eating out more" (p. 86). Then he described how Kelley proposes to save their bacon. First, a summary of experiential shopping in a variety of venues:

"Kelley says, grocers can’t be satisfied with providing a place to complete a chore. They’ll need to direct an experience. Today’s successful retail brands establish what Kelley calls a 'brand realm,' or what screenwriters would call a story’s 'setting.' We don’t usually think consciously about them, but realms subtly shape our attitude toward shopping the same way the foggy, noirishly lit streets in a Batman movie tell us something about Gotham City. Cracker Barrel is set in a nostalgic rural house. Urban Outfitters is set on a graffitied urban street. Tommy Bahama takes place on a resort island. It’s a well-known industry secret that Costco stores are hugely expensive to construct— they’re designed to resemble fantasy versions of real-life warehouses, and the appearance of thrift doesn’t come cheap. Some realms are even more specific and fanciful: Anthropologie is an enchanted attic, complete with enticing cupboards and drawers. Trader Joe’s is a crew of carefree, hippie traders shipping bulk goods across the sea. A strong sense of place helps immerse us in a store, getting us emotionally invested and (perhaps) ready to suspend the critical faculties that prevent a shopping spree." (p. 92).

There were a number of descriptions of what shoppers experience in a variety of stores from big chain grocery stores to a smaller regional ones. I wondered if I could really remember what it's like to go shopping in person for groceries or anything else. Of course I remember it, but there's a dimming quality in the memory, sort of like remembering my trips to Paris or Hawaii, where I've been many times but not recently. Not the same as thinking about what I do at least once a week. Like the Cowboy Caviar and Corn Chile at Trader Joe's -- I've almost forgotten them.

Am I real? Frequent grocery shopping maybe contributed to my sense of being real. Yes, grocery stores may have to change, but before the predictions started to materialize, most of us found ourselves unable to shop anywhere, because of the pandemic. Fassler writes:

"The world existed before supermarkets, and it won’t end if they vanish. And in the ongoing story of American food, the 20th-century grocery store is no great hero. A&P— the once titanic chain, now itself defunct— was a great mechanizer, undercutting the countless smaller, local businesses that used to populate the landscape. More generally, the supermarket made it easier for Americans to distance ourselves from what we eat, shrouding food production behind a veil and letting us convince ourselves that price and convenience matter above all else. We let ourselves be satisfied with the appearance of abundance— even if great stacks of unblemished fruit contribute to waste and spoilage, even if the array of brightly colored packages are all owned by the same handful of multinational corporations. But whatever springs up to replace grocery stores will have consequences, too, and the truth is that brick-and-mortar is not going away anytime soon— far from it." (p. 103).

Doesn't this seem odd and alien in our current situation with its abrupt changes to all shopping?

Certainly the articles in Best American that describe various restaurants should also seem unreal and unrelatable. To me they don't seem all that disconnected from my current reality because famous food writers like the ones represented here write about restaurants that I would never patronize anyway (the only exception is a description of Sparky’s in Hatch N.M. a famous diner where I once ate a chili cheeseburger). My favorite writers in this collection deal with the concept of “authenticity,” and what it really means, which I might write another post about. Articles about appropriation of ethnic foods by profit-seeking and better-funded mainstream entrepreneurs are interesting as well, and I wish I could go to a nice Mexican restaurant somewhere in the Southwest, or to an Asian restaurant in Fairfax, VA. But it’s going weekly to grocery stores that I really miss.

I am not sure how I would have coped if my only resource was online shopping? Our laws and protocols are strict here, allowing for the normality of selecting our own produce. We have to wear masks and sanitise. Numbers in stores are limited and trolleys used for social distancing. I hope you will be able to do this soon.

I feel like going grocery shopping is pretty much the only activity I do now besides going to work. I think we are going to have these feelings for a while while media sorts into pre-COVID and post-COVID. We watched a tv show the other day where multiple people took bites from a burger. My husband yelled at the tv, “Do you all want to die?”
I love these collections. I haven’t picked this one up yet.

I am extremely lucky to have a dear friend shop for groceries for me. There's no way I could afford to shop online or allow a shopper to buy my groceries at a specific store that charges far more than I'm willing to pay. Part of my shopping choice has to do with cost of food. It's the ONE place I can control costs. I certainly can't control the cost of utilities or real estate taxes.

I remember when I lived in a small town in MO, there was a little grocery store about two blocks from where I lived. WalMart came to town and ran them out of business. This was a good review, because it made me think.

I missing grocery shopping. Mainly selecting my own produce. It's amazing, though, that we can exist without ever entering a store these days. Very weird from how things used to be. We'll certainly go back to grocery shopping when we judge it safe again, but I'll bet we'll still use some delivery. Anyway, happy holidays!

I am so guilty dearest Mae of eating so much more processed foods in this pandemic :( It's kind of hard to catch fresh produce lately with the fact that we were never lifted from the lockdown until now. Hope you are doing well there in the US!

What an excellent and thoughtful review -- and yes, I think in the past 10 months, a lot has changed about how we feel about grocery shopping and home cooking. I long to really do a good grocery shop. Last night Rick did my shopping and came home with several of the wrong things. I didn't even give him the half of the list that I knew the neighborhood grocery we do most of our shopping at would not carry. I'll do an instacart order for those from a bigger store, one I used to visit once a month for the things not at my other market. I long to pick out my own produce or make my own impulse buy, or to rethink my dinner plans because I see something I'd not thought to put on the list. All in good time.

I hate grocery shopping. They change concepts/places for products, there is no logic.
Why, for example, would you have wine and liquor in one area and beer and softdrinks/water in another faaar away?
I needed softdrinks and wanted a wine for cooking.
OK, no wine then.
I skip that shop altogether by now.

A friend of mine said, after returning from a visit to.. Florida (?), food was cheap in supermarkets, except fresh food, is that true?

We have the same rules in place as Lavender and Lime mentions. I have only done one online shopping order during the pandemic, and it was to stock up on heavy boring canned goods that are heavy to carry. Other than that we have continued to use our local fruit and veg market. I continue to go to my favourite grocery store, a local chain. I avoid the mega grocery stores and would never shop in Wal Mart. John does do Costco for bulk.

BUT what I miss the most are exploring Chinatown and other ethnic grocery stores. I miss going to the market without being scared.
I just miss wandering and buying as I find stuff.
I miss picking up random snacks for lunch as I poke around. I think I have had maybe 6 takeout lunches.
I miss normal.

We have been a little more open than other communities, but here the problem is that stocks do not arrive at the retail outlet. 2020 has been like no other year, take care.

I miss unstressed grocery shopping and the farmer's market. Things will return to normal by summer -- I HOPE.

My husband did most of the grocery shopping pre-pandemic, and all of it now, as my immune system is fair to middling when it comes to respiratory viruses and fighting them off. 2020 is almost over, and that's the best that can be said for it!

I still have the 2018 edition setting in a partially read stack!