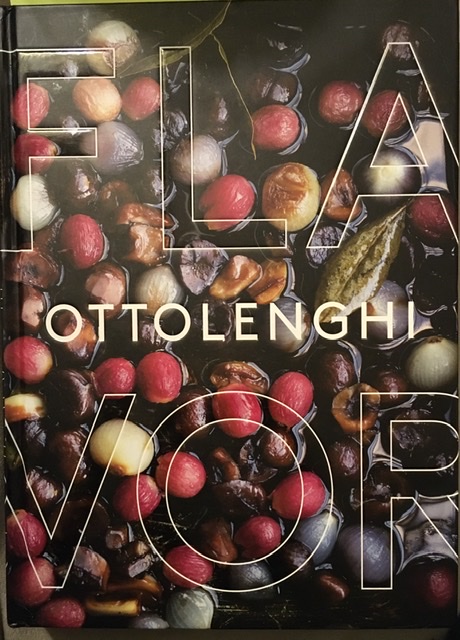 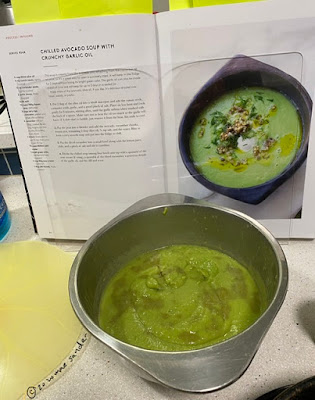 Flavor is illustrated with beautiful photos of the food from the book's many recipes. These recipes are about half vegan and half vegetarian, with occasional non-veg ingredients, mostly optional, like a few anchovies or some chicken stock. The emphasis is on creating vivid flavors for vegetable dishes, using a wide variety of international ingredients from South Asia, Japan, China, Korea, the Middle East, and more. 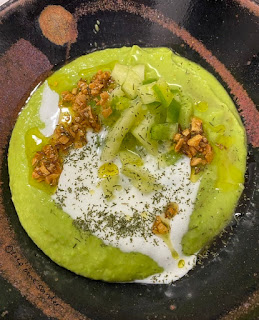 The chilled avocado soup recipe calls for a garnish of spicy olive oil cooked slowly with crunchy garlic and whole spice, as well as a bit of sour cream (I used Kefir), some chopped cucumber and pepper, and a sprinkle of dill. It was quite delicious! 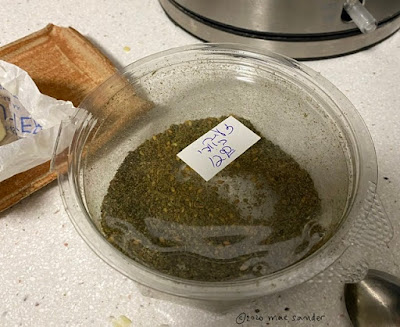 Za'atar is a Middle-Eastern spice that's used in several of the recipes.  Pictured: my box of za'atar which I bought during my most recent trip to Israel -- that's why it's labeled in Hebrew, which I can't actually read or write myself. The recipes in the book use it in original ways. In anticipation of trying more of the recipes, I've also purchased several types of fresh red and green peppers, a jar of Korean chili flakes, some harissa, and a box of white miso paste. 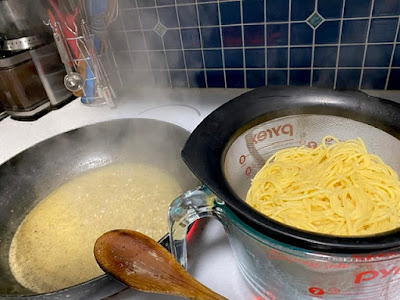 One interesting recipe that I tried is called "Za'atar Cacio e Pepe." That is, a reinterpreting of a Roman classic, Cacio e Pepe -- pasta with cheese and black pepper.  "Messing with an Italian classic is not something that we do lightly, but adding za'atar really doesn't take anything away from the much-admired simplicity of this dish," the authors write. The photo shows my cooked spaghetti, from which the cooking water is being reduced to create a sauce with butter, spices, and cheese. 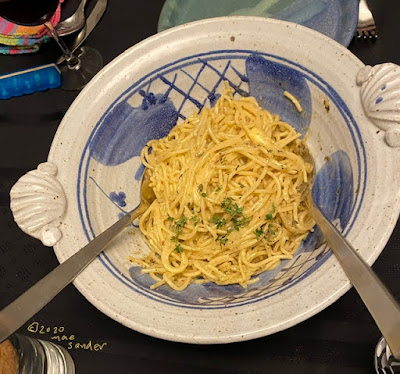 The finished dish, garnished with fresh thyme. The recipe
specified marjoram, but I didn't have it, so I used thyme.
This dish was really impressive tasting, though a bit fussy to prepare. 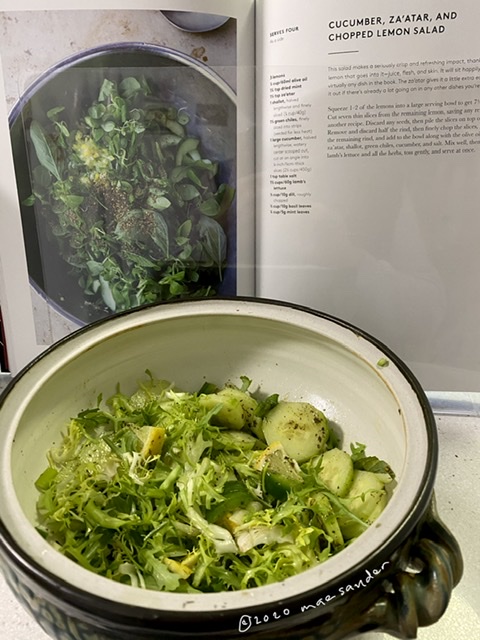 Salad of cucumber, za'atar, and chopped lemon. It's winter so I did not
have all the fresh herbs and greens required by the real recipe, but I did my best. 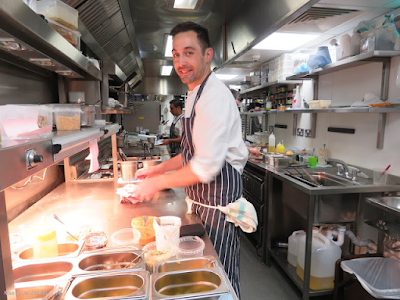 In 2016 we had dinner at Ottolenghi's restaurant in London.
Here's a photo of the kitchen of the restaurant for inspiration!
My first experience with Ottolenghi's recipes was cooking from the book Jerusalem, coauthored by Ottolenghi and Sami Tamimi. Recipes I've made from Jerusalem -- and in fact most of Ottolenghi's characteristic recipes -- also make innovative use of unusual condiments, traditional preparations like harissa or Korean chili paste, and a wide variety of vegetables. I'm looking forward to trying more of the recipes. I'm so enthusiastic about the book that I've set a few copies of it, and of Ottolenghi's baking book, as holiday gifts.
Blog post and photos © 2020, 2016 by mae sander.
Posted by Mae Travels at 6:30 AM

This looks like a book I would love to browse, browse again and then begin the cooking process!

Great idea with the spaghetti-water as base, will remember that!

Wow, you made it into the kitchen in London and got e very lovely picture.
And you surely traveled the world -thank you for sharing all this!
Harissa I was introduced to by Jamie Oliver and use it a lot.
Please keep on sharing!
Shoot. Now I´m a tad hungry... no, just greedy for yummy food!

Gongratulations to your book. It looks very good.

You had me at vegetarian. This sounds like a fabulous cook book and the photos are superb.

I'm excited now to go through this book. The dishes you prepared sound great.

Sounds like a great cookbook. The meals look yummy, I would love the pasta with cheese. Take care, enjoy your weekend!

Looks delicious. I have a couple of his older cookbooks and haven't seen this one. But your food looks so yummy, I might have to look into it. Happy weekend!

I have his Flavour cookbook, but haven’t made much from it. The avocado soup looks rich and creamy.
Eva http://kitcheninspirations.wordpress.com/

I have never heard of this chef. The recipes you share sound wonderful. I'll have to check him out.

What a beautiful book that is. And the recipes definitely look like recipes I'd like to try. That chilled avocado soup looks delicious.

Thank you for sharing it. I will share it with my sister who also loves to cook.

Seems like this will be a great resource for you!

i've never read his books nor cooked his recipes. maybe i should give him a go? :-)