The Aztecs' Own Story 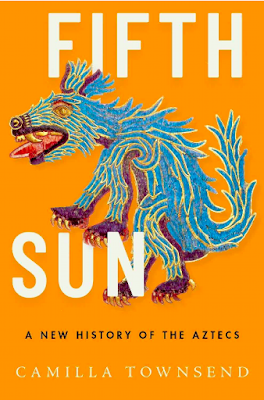 The Spanish conquest of the Aztec empire was recorded in fairly much detail by the conquering Spanish troops, and that's the version of history that's been cemented in our heads (if any version is in our heads at all). Historian Camilla Townsend in Fifth Sun: A New History of the Aztecs offers an alternative, based on accounts recorded by the descendants of the conquered people approximately a generation after Hernando Cortés conquered them.

Like many academic history books, it's challenging to follow every thread in this narrative, but it's full of fascinating detail. It begins in very early times, and chronicles the interactions, rivalries, and wars among a number of ethnic and political groups in the Valley of Mexico during the several centuries before the Spaniards arrived in approximately 1519. The conquest is described in very detailed terms from the point of view of the conquered peoples, including those who allied with the invaders because the rulers had been their enemies for a long time. After the conquest, Townsend covers the slow decline of the native people, who suffered not only from military defeat but also from the European diseases that were introduced and spread wildly among the non-resistant native population. Some of this is a familiar story, but much was fascinatingly new to me.

I can't possibly summarize this complex book, so I'm just going to say that I really enjoyed the rich detail about the lives and times of the historic peoples. And I'm just going to quote some food descriptions that show you how much wonderful detail is there. 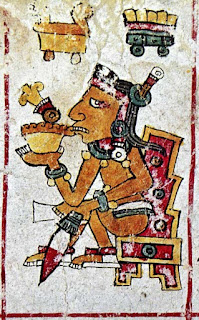 Here's a description of the food that the rulers of Mexico would have enjoyed in the late 15th century, a generation before the conquest:

"Their hosts offered them food, and they feasted. The tamales boasted decorative designs on top, such as a seashell outlined with red beans. Guests could choose between turkey, venison, rabbit, lobster, or frog stewed with chilis of various kinds. On the side, there were winged ants with savory herbs, spicy tomato sauces, fried onions and squash, fish eggs, and toasted corn. There were all kinds of fruits, tortillas with honey, and little cakes made of amaranth seed. Indeed, a former servant once counted two thousand different dishes made for the Mexica king and then passed on to be sampled by his councilors, servants, and entertainers. At the very end of the meal always came chocolate— crushed cacao beans steeped in hot water and flavored with honey and various kinds of dried flowers, such as vanilla pods or roses. To render it even more special, the drink was served in carved or painted gourds, often from faraway lands." (pp. 64-65).

I located an Aztec image of a man drinking chocolate, which I included here (source: Codex Borgia, in "The Early History of Chocolate").

The marketplace in the center of the city in the age before the conquest:

"One part of the market featured luxury goods— gold and silver, turquoise, jade and other gems, the feathers of exotic birds. Merchants sold these to artisans as raw materials, and to wealthy customers as finely crafted textiles and beautiful jewelry. ...

"It was the section selling food stuffs, though, that most impressed people who had never been to the marketplace before. The stalls offered everything— every type of corn and bean, all varieties of salts and herbs. Birds and animals rustled in their cages. There were fruits and vegetables, cacao and honey, bird eggs and the delicious bars of dried algae from the lake. But what was remarkable about Tlatelolco, what made it different from neighborhood food markets, was that food could be bought partially prepared, for urban customers too busy to make everything from scratch. One could buy pre-made tortillas and little cakes, squash already cut into pieces, smoked chilis, and ground cacao. Hungry shoppers could go to what was effectively a restaurant— a stand where prepared meals were available for sale." (pp 75-76)

After the conquest the lives of the native people became harder and harder. Here's what a conquered group had to provide to their Spanish rulers:

"Cuauhtinchan was committed to providing 24,000 woven blankets every four years, as well as twenty turkeys, six thousand bushels of corn, sixteen baskets of beans, eighty of chile, sixteen of chia, and sixteen of salt." (p. 145). 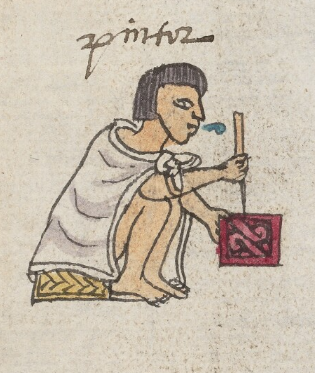 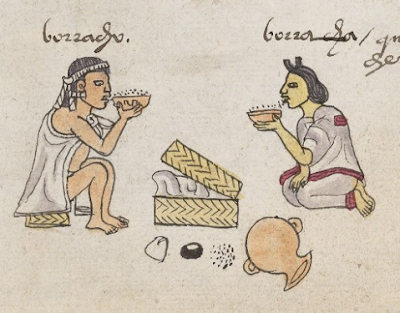 At the start of each chapter of Fifth Sun is an illustration from one of the documents
that are used as sources for the book. These are from Codex Mendoza in the
Bodleian Libraries, University of Oxford.

Townsend really does a fabulous job of making individuals come to life, and it's amazing how many fully documented characters she found in the sources she used. While I enjoyed reading this book, I'm just not capable of doing justice to it in a real review.

I don't know a lot about the Aztecs except that had a vibrant civilization. The books sounds like a good read, except maybe the work it takes to get through it. But certainly informative.

This sounds good but way too complex for anything I want to sink my teeth into these days! I love the illustrations you shared.

It sounds to me the Aztecs had a very hard time once they were concurred. It's sad to imagine a vibrant and highly productive and functional society reduced to slavery in a few years time.

I remember first learning about the Aztecs, but I'm sure research has come a long way since then. This book would be a fascinating read from your description.

We watched a very interesting documentary of this time in history, but it did not include any information of the food. It sounds like they had an abundance.

There are lovely illustrations in that book :) Wishing you a Merry Christmas Mae! :)