What to Eat for New Year's Good Luck

We all would like better luck for 2021!! Let's eat lucky New Year's foods.

I especially enjoy reading various lists that include not only food traditions for the Western New Year's Eve on December 31, but that also describe traditional foods from other celebrations such as Asian New Year a bit later in winter, Persian New Year at the start of Spring, and Jewish New Year in the fall. Here's the longest and most varied list I found: "20 New Year's Food Traditions That'll Bring You Good Luck in 2021." 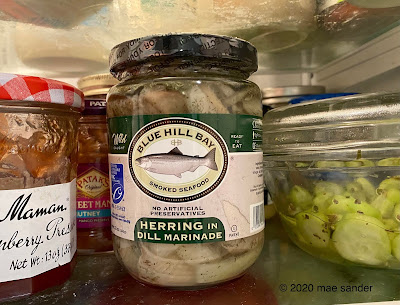 Our plan for New Years Eve this year is to eat pickled herring, which is waiting in our refrigerator as you can see. We are quite fond of herring any time, so it's a pleasant choice for the holiday. Herring is a tradition in Scandinavia, Poland, and other parts of northern Europe, as well as in many American communities where there are descendants of immigrants from these countries.

One reason for eating herring on New Year's Eve is that the silver color of the fish is the color of silver coins, so it's kind of a magical way to attract money. Another reason is that finding shoals of herring was a lucky break for fishermen, as the North Sea herring are very unpredictable as to where they show up each year. And a cynical reason advanced to explain the herring tradition is that herring was a widely available and not-too-expensive food in northern Europe, so of course people ate it. Choose your reason!

Another northern European tradition, shared by immigrant communities in North America, is to eat pork and cabbage or sauerkraut for New Year's Eve. Why pork and cabbage? Reasons I've seen are not all that convincing. Cabbage is green like money, and pork is fat and rich-tasting. Pigs only walk forward, not backwards, so they represent progress. And pigs are slaughtered in December, so they are available. Too many reasons!

In Germany and Austria, there's a more amusing way to enjoy lucky pork: marzipan candy formed in the shape of cute little piggies to be eaten at New Year's. Here's a picture of the piggies for Evelyn's family celebration: 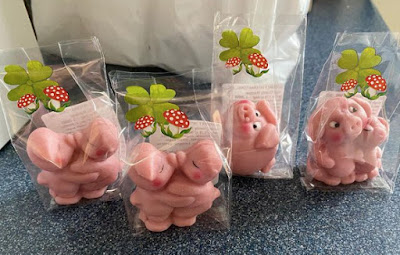 Hoppin' John: the Lucky Food of the American South

"Legumes are among the world’s oldest crops. They have been found in Egyptian tombs and turn up in passages in the Bible. The black-eyed pea, which is actually more of a bean than a pea, was introduced into the West Indies from Central Africa in the early 1700s and journeyed from there into the Carolinas. The pea with the small black dot is considered especially lucky by many cultures in Western Africa. While the pea was certainly not lucky for those who were caught and sold into slavery, the memory of the luck it was supposed to bring in West Africa lingered on among the enslaved in the southern United States and the Hoppin’ John that is still consumed on New Year’s Day by black and white Southerners alike is reputed to bring good fortune to all who eat it." -- Jessica B. Harris, High on the Hog (p. 20).

While some foods were lucky for their green or silver color, other foods were lucky for their shape. Round food like orange slices or special round cakes could represent the continuity of one year into another. Another round or maybe coin-shaped food is lentils, which are considered lucky in Italy and Hungary. In Vietnam, a round cake called bánh tét is is eaten for Tet, the Vietnamese New Year. Regional  versions vary: some have sweet vegetarian fillings and others include pork filling or pickled vegetables. (source)

In Japan, special soba noodles called toshikoshi soba are a tradition for New Year's Eve. Soba noodles are long, symbolizing long life. They are made from buckwheat, which is supposed to bounce back after it's pelted with rain, so it's an auspicious ingredient for a New Year's dish. Also, soba flour was used by goldsmiths -- so it is associated with wealth. (source) Similarly, for Chinese New Year celebrations later in the winter, long noodles symbolize long life -- and it's VERY unlucky to cut them while preparing or eating them.

In Spain, grapes bring luck for the New Year: it's traditional to eat 12 grapes at midnight on New Year's Eve, one grape for each peal sounding from the local bell tower. In Jewish tradition, eating red grapes on Rosh Hashanah, the Jewish New Year, was forbidden, but it was good luck to eat green grapes.

Whatever your tradition, I hope you enjoy a delicious and lucky meal on New Year's Eve. Above all, I hope everyone will have a healthier and more rewarding year in 2021 than all of us had in 2020!

Maybe I'll talk Rick into making Soba for New Year's Eve. I didn't know its connections. What a fun food post. When I was a kid, every year I would get creamed or marinated herring in my Christmas stocking (along with olives and sardines). I still love them all, although sardines a bit less than the others! No matter what we're eating, enjoy your herring and happy new year!

You too have a healthier and happier 2021! I love Herring and going to fry some for Friday too :-))

Interesting post, Mae! We love pickled herring too, and have a large jar of it in the refrigerator. That would be awesome if it attracted money! Instead of pork for this New Years' dinner, it will be roasted chicken. Love black-eyed peas also. I didn't realize that so many foods are associated with good luck.

Ham and black-eyed peas is our tradition for luck in the new year. I hope it helps :)

I did not know about the herring for New Year – I’ll get some. When we moved to Atlanta, I remember the week before New Year 1974, the grocery stores were showing their black eyed peas - dried, canned or frozen, their greens and their ham hocks and other salt pork pieces in prominent places. That’s when I learnt about hoppin’ John. I tried making it and we liked it. I have been making it for New Year every year since, that’s, let me see … about 45 years or so – no wonder I have been lucky! I have changed and upgraded the recipe and now it tastes quite yummy. My son-in-law who was born and raised in Georgia said I make the best hoppin’ john, pot of greens and corn bread. (Although he might be trying to just make me happy …)

Not exactly my Grandparents tradition, but someone told me black eyed peas are to be eaten on new year's day. I've made a pot in the past, but probably won't this year. I DO hope you have a lovely new year's eve and eat (and enjoy) those pickled herrings.

From your lips to G-d's ears!

Brrr. Do you know Rollmops? As good as Herring, Ingo loves them both, I run! LOL. (I know it´s so healthy!)
So many choices why THIS brings luck, eh?
I take Sauerkraut then!
This is interesting! Thank you!! Marzipan. I run backwards ;-)
Uniting is a great plan for the New Year (or always), as a long life (?),but how do you eat them then, those noodles?
12 grapes, holy moly, you´d find me....
My parents had fondue, it was a pain, I always was afraid our house´ll burn down. My Dad and later my Brother had to do the job for me...