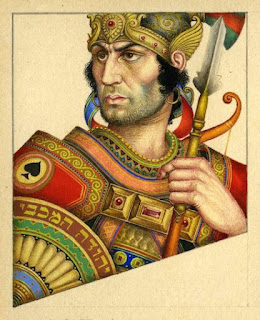 See, the conqu'ring hero comes!
Sound the trumpets! Beat the drums!
Sports prepare! The laurel bring!
Songs of triumph to him sing!
George Friedrich Handel's Oratorio Judas Maccabaeus was written to celebrate a British victory in 1746. However, as the Maccabees are also the heroes of Chanukah, it is also an appropriate piece of music for the holiday. The eight candles of Chanukah represent the miracle that took place after the Maccabee victory commemorated in the Oratorio: the oil for the rekindled lights of the temple lasted eight days when it seemed only enough for one day. The image above is a drawing of Judas Maccabee by Israeli artist Arthur Szyk.

Beethoven's birthday is traditionally celebrated on December 16, though what's really known is that he was Baptized on December 17, 1770. To celebrate his 250th birthday, Classical radio stations have been playing Beethoven's music all during this week, and I've enjoyed it. I'm a really big fan of Beethoven, so to celebrate both his birthday AND Chanukah this week, I'm sharing a recording of his variations on a theme by Handel from the oratorio Judas Maccabaeus.

12 Variations for Cello and Piano on "See the conqu'ring hero comes"
Blog post © 2020 mae sander, images as credited.
Posted by Mae Travels at 8:39 AM

Thank you for sharing the video, the music just beautiful. Also thank you for the info on Chanukah. I

I didn't know this story about Hanukah. It is really fascinating.

I heard a lot of Beethoven on WKAR yesterday. I hope you and Len had a lovely Hanukkah -- albeit a different one from years past. On one night I did have my Trader Joe latkes -- not the same as real ones, but in a pinch!

Thank you for sharing the video- I love classical music and especially Beethoven. I enjoyed listening to it.