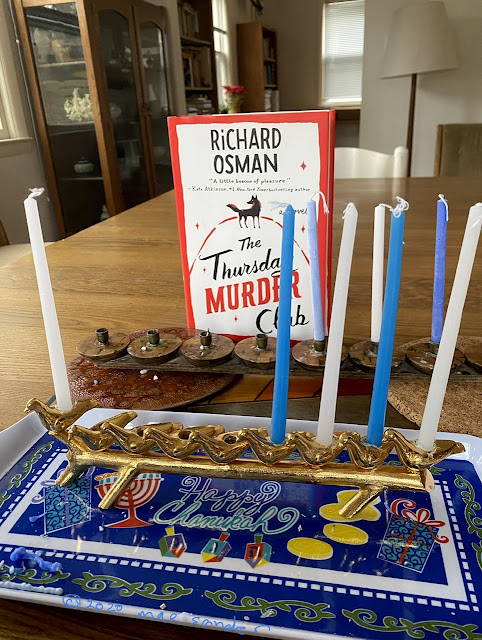 The Thursday Murder Club by Richard Osman, a recently published mystery tale, was a Chanukah gift from my sister. I started reading it Friday (the second night of Chanukah), and finished it on Sunday, enjoying every minute. It's a well-plotted mystery full of surprise twists with a number of very amusing characters. Quite a few of them live in a retirement village in England where they have a club that meets on Thursday in the jigsaw room, scheduled between Art History and Conversational French. The narrative includes a lot of very amusing wisecracks and observations about popular culture, which I like about this first-time author (who appears to be well-known as a British TV personality, but not to me).
The purpose of the Thursday Murder Club is for the members to spend their two-hour time slot revisiting murder cases from police files illegitimately kept by a former police officer who lives in the Village. It's an armchair pastime for intelligent people with a bit too little to keep them occupied. Baking lemon drizzle cake or going out for coffee or shopping is one thing; figuring out murders is something else. Of course a real murder stirs them into real -- and effective -- action, despite their advancing age. Other characters in the novel are couple of police officers (yes, they eat donuts), a few random criminals (some in hiding), and a very unpleasant real estate developer. Quite a good read: I am grateful to my sister for discovering it for me. 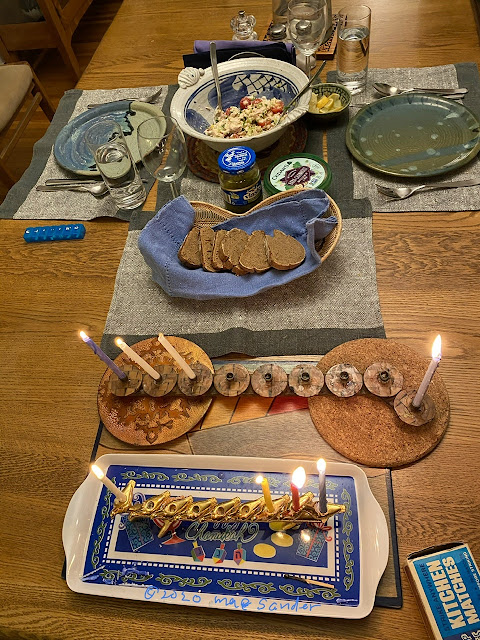 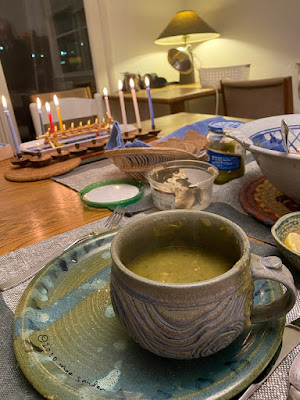 Soup in my newest soup cup. 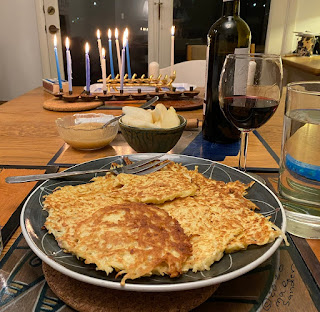 The fourth night: a platter of latkes for two.
It's sad to make them for just us, as we often have as many as 10 at table
for the holiday. That said, it's a lot easier to make a smaller number of latkes. 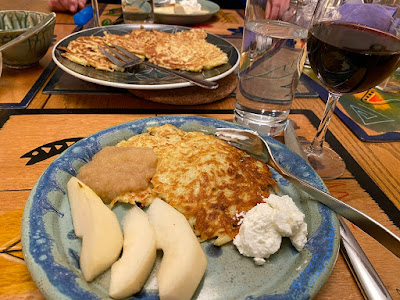 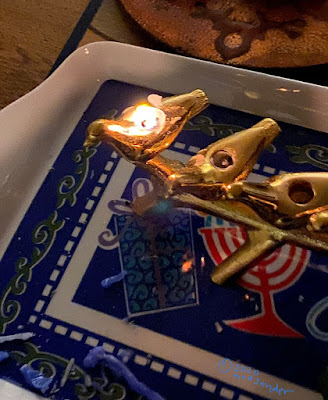 The last candle to go out in the bird menorah that I
bought in Jerusalem in 2006 at the Israel Museum gift shop.
Four more nights of Chanukah to go!
Blog post and all photos © 2020 mae sander.

Both of your menorahs are beautiful. And latkes-YUM! Growing up my family had very close family friends who were Jewish and we lived in an area of Massachusetts with lots of Jewish bakeries and other ethnic food choices (not here in NH at all now). We used to make latkes at home sometimes and they are very yummy. And your book sounds good. I am going to add it to my wish list as I am always on the look out for a good book--mysteries especially.

I am SO glad you are sharing Chanukah or Hanukah with us, because I still know very little about it. I know I love latkes because my grandmother made them on occasion. I had no idea they were for Chanukah, though.

Both your menorahs are beautiful and I learned from what you showed, the candles burn all the way down each day. That was also news to me.

Your meals must be well thought through, also. I'm delighted your shared them with us, including your wine for early T this week.

Your mystery sounds intriguing. I would love to read it, because it sounds like a really fun read.

Your table setting is gorgeous and the food looks incredible,
Thanks for the review of the book. It is one of the books on my DIL's wish list. I will send it to her today!

What a fun looking mystery game! Thank you for sharing your lovely Hanukah celebration and sharing the food. I don't know much about the Jewish faith but am always interested in learning and understanding. Happy T day!

I will look out for the book. Richard Osman is in a game show called Pointless which we watch most nights during the week. We really enjoy it. Thanks for telling us where the Menorah came from.

Now this sounds VERY tempting again!
And the bread. The latkes! They look like Rösti. OK, it is Rösti, or Kartoffelpuffer with that apples - both YUM!
Yes, sad we cannot really share.
It will be a time to remember. Somehow.

Chat Chanukah sameach! Looks like you have been feasting well. The book sounds good, I will try to get it. Happy T Day, Valerie

Glad you had a good read and good food on the table! And I love your soup cup and the matching plate. So beautiful! Have a nice day!

That sounds like a good book. Richard Osman is (or was, I don't know) a game show host of a quiz programme that I watched when we lived in the UK. I didn't know he also wrote.
Thank you for sharing Chanukka with us. I know very little about it other than that it involves a candelabra with more candles than a menora.
I've never had latkes, must look that up. I like the idea though. (sort of potato fritters...)
Happy T-Day,
Hugs,
Lisca

I am so happy you shared how you celebrate this season. The settings are beautiful,( and I love your plates and mug) The book sounds exciting. I like this genre. Have a wonderful day.

Your table looks so good and the food looks even better. That book sounds like a great read. I wrote down the name and author.

While the kids were growing up, we "observed" some of the Jewish holidays as we could in an effort to be more informed and knowledgeable. I think one of them has the menorah we used. Sweet memories.

Your meal looks delicous and hopefully we can all be with our friends and loved ones next year. I am looking forward to the vaccine and some return to normalcy agan. If it ever can go back to any semblance of normal after our country was damaged by he-who-must-not-be -named, Ha!

Love the sound of that book I immediately placed a hold on it at the library.

Everything looks delicious, and the book sounds wonderful! Enjoy the holiday's!

Your table, the two menorahs and you new cup are all beautiful. Thanks for sharing your Chanukah traditions. I would love a taste of that rye bread!

Happy Hanukkah! I was admiring your bird menorah. So very pretty. The food looks wonderful and your table is beautifully set. Holidays will look different this year, but as the candles shine, hope for next year. Happy T Day

Happy Hannukah! Your table looks wonderful!
Richard Osman is indeed a TV personality (as a comedian)but he has also produced shows and script edited several TV shows too! He came up with the idea for a quiz programme called Pointless, which hubby and I watch at 5.15 every week day. He co-presents it with another talented entertainer Alexander Armstrong.
Last year he also started his own show - Richard Osman's House of Games that we also watch occasionally!
I am looking forward to reading the book, which Steven Spielberg has bought the film rights of!
He apparently wrote the book in secret just in case no one wanted to publish it!
Belated Happy T Day, Chrisx

How fun! This sounds like a great way to pass the time. Delicious food and a murder mystery.
Happy Tea Day,
Kate