"Ocho Kandelikas," a Sephardic Jewish song in the Ladino language, is my favorite Chanukah song. Flory Jagoda, the author, recorded the video in 2010; there are several other Youtube videos of her performances of the song, if you're curious. Probably based on a Turkish folk song, "Ocho Kandelikas" celebrates the eight nights of the festival of Chanukah. It's basically a counting song, that starts "eight candles for me." Each repetition counts down ... eight, seven, six... and so on.
American songwriter and folk singer Flory Jagoda was born in Bosnia in 1923. Her life history is very interesting: she lived in various towns in Bosnia until the beginning of World War II, when the Nazis were hunting down the Jews. She and her family fled, eventually ending up in Italy where she met and married an American GI and then moved to America. She currently lives in Northern Virginia. For a more detailed biography, see her Wikipedia page: "Flory Jagoda.”
This year, Chanukah began on Thursday, December 10. 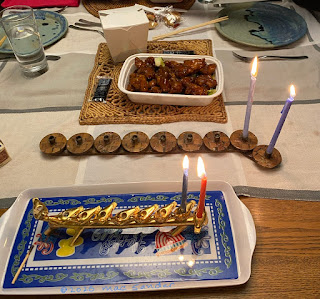 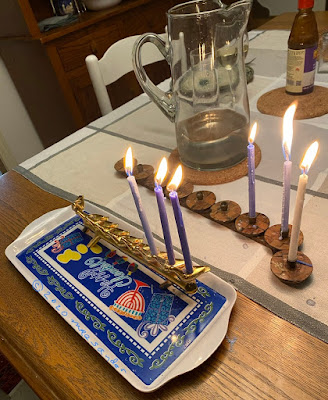 In the photos: the first two nights of Chanukah at our table. We are mixing things up this year: we had Chinese takeout for the first night, and leftovers from the takeout for the second night. The cliché is that Jews have Chinese food for Christmas! Although we are alone this year, we have been lighting candles each night, and I'll be making the traditional latkes one night soon. Of course we miss the usual get-togethers with friends and family that we have enjoyed throughout the years.
Blog post © 2020 mae sander.
Posted by Mae Travels at 10:55 AM

My granddaughter FaceTimed me last night to show me her presents for the first two nights. She was thrilled to get her first very own menorah and a doll.
Happy Chanukah!

I'm thrilled you shared this with us, Mae. I admit I know absolutely nothing about Chanukah, so this is a nice way to educate me.

Thank you for sharing this Mae. What is the history behind your two Menorahs?

Being half-German this sure is a burden.
"Luckily" all over town we have so-called Stolpersteine - stumble-upon-stones (that nasty little Austrian man was granted German citicinship here, eeeeek, how... how)

We certainly... thank you for celebrating this, I will never understand how people can go at each other like this.

What a beautiful song. The lights are beautiful, too. I remember making latkes in my classroom as a very young teacher. How old are those children now? Late forties, I think. I wonder if they remember this fondly as I do.

Thank you for sharing your traditions.

Mae, you mentioned that our lockdown isn't like yours. All non-essential stores and malls are closed except for pre-ordered pickup.

Only groceries are open limited to 50% capacity. No restaurants are open for either inside dining or outside. Take-out and delivery only. Food courts can be open, but again, there is nowhere to site and eat.
Mandatory 6 feet apart and masks required in any public place.
Outdoor public events limited to 10 people. Hence all holiday markets and events are cancelled.
When we go out it is to walk around staying away form everybody. Our building has a shuttle bus to downtown which helps us avoid public transit.
Or else we go by car.

Happy Hanukkah 🕎
I love latkes, I would happily eat them every night :)

Wishing you a great week

Happy Hanukah Mae! Your candle holder is beautiful as is the tray you have it on.

I enjoyed that song. I like seeing all the different kinds of menorahs, from simple to elaborate.

This song is beautiful, and so is her voice. I love the guitar, as well. I can see why it's your favorite.

I hope you are enjoying a happy Hanukkah. I know it's so different, being separated from your daughter and the family. But I know you and Len will have lovely meals and if you are listening to music like this, you'll have a good soundtrack, too.

My husband is Sephardic but with a French background. I have a good friend from turkey who speaks Ladino and he probably will enjoy this.. passing it on.. you have shared so many interesting posts about hanukah .. Thanks.