"I finished me thirty years in 2012, got me pension, bought this car, and now I have a grand old time driving about the place, listening to the radio, having the craic with folk. And a few pints at the weekend o’ course." (Sweet Little Lies, p. 293). 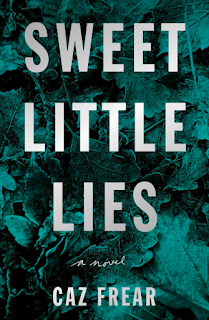 So explains a former Irish policeman to the police detective from London who is interviewing him about suspects in her murder case. The London detective, named Catrina and called Cat, is the narrator of Sweet Little Lies by Caz Frear (first published in Britain in 2017). Like many of the characters in the book, Cat's Irish interviewee speaks in a kind of dialect, which I think is very carefully chosen to be both colorful and understandable.

Various Irish words and slang words in the book also amused me, but I was especially taken with craic.  Here are a few more times it's used in the novel:
Craic, I learned, means gossip and fun -- a good word for wordy Wednesday today! Urban Dictionary defines craic as "Irish word for fun/enjoyment that has been brought into the English language. usu. when mixed with alcohol and/or music. ... Fun doesn't really cut it though. General banter, good times had by all." (source) According to Wikipedia, "The word has an unusual history; the Scots and English crack was borrowed into Irish as craic in the mid-20th century and the Irish spelling was then reborrowed into English." (source)

Besides enjoying the language the author uses, I found Sweet Little Lies to be a wonderful book, full of well-developed and quirky personalities and compelling in its ever-increasing suspense about which of the characters is involved in the murder at hand and why and how they did it. Like all mysteries that I love the most, Sweet Little Lies uses food to advance the story and round out the character development, like these:


"I sit by the fridge. Eat a bag of grated cheese like a packet of crisps. 'Disordered eating,' a counselor called it. 'Often the result of an aloof or aggressive relationship between a father and daughter.' ... I take the cheese, an overripe kiwi and a can of cherry Coke and walk up the two flights to my bedroom." (pp. 88-89).

"'Tell you what, I’ll get chef to make you something. Anything you want. Peach and honey pancakes, maybe? You could never resist them.' Some things never change. Dad trying to manipulate me with sugar is one of them." (p. 118).

"I ate malt loaf for lunch that day. Four fat wedges slathered thick with real butter. Gran loved to watch people eat, always complaining that the only person who ever called to the house was that scrawny one from the Department of Social Protection and you’d be all day trying to get her to eat a biscuit. 'Not like you,' she’d say, cheerleading me through a plate of ham sandwiches that you wouldn’t give to a wrestler. 'Now you wouldn’t get blown down in a strong wind, my Catrina.'" (p. 6).

Aromas also contribute to the effectively vivid sense of drama that I enjoyed throughout the book. Cat says, for example: "If domestic smuggery could be bottled it would smell just like this. Topnotes of gingerbread and basenotes of cloves." (p. 218).

As you might imagine, there's also a lot about drink in this book. I liked this:


"'That which does not kill us makes us stronger,' claimed Nietzsche, or Kanye West, depending on your cultural frame of reference, but exorbitant wine consumption must be the one exception because I certainly don’t feel strengthened by last night’s two-bottle bender. I feel annihilated." (p. 197).

Cat doesn't overdo the philosophy, but when she does, it's good. She describes the neighborhood where she stays in Ireland to do some interviewing:


"There’s also a bookie’s, three pubs and a funeral parlor. Somewhere to eat, somewhere to shop, somewhere to bet, drink and die. A blueprint for a life simply lived." (p. 295).

We have an Irish friend so I've heard a few of those words. This sounds like a book I need to pick up!

Love the word, "craic" — one of those words that I kinda, sorta know, but not really (I recognize it when I read it, but have to stop and think about what it means). Sounds like a fun read. I love books with a good "voice" and it sounds like this one has that.

I'm so glad you posted about this book. I don't know why but I passed it by when I saw the cover, your description of the book has me requesting it at Netgalley and the library.

Thanks for the review. I have found the next book I am going to read. I was coming up short on my reading list. Thanks again.

I'm pretty sure I have a copy of this somewhere in my house ... I'll add it to my list.

Thoroughly enjoyed hearing about this book. I love hearing the Irish speak and will have to add this one to my TBR list. Thanks for sharing all the great excerpts!

My copy came in at the library, I’m off to get it today. There is a Tana French Novel I am starting first because I know I can’t renew it. Looking forward to this book though.

A great riff on words Mae. And a book you've definitely sold me on.

Definitely adding 'craic' to my great words list. ;-) The book looks good and I love all of the food mentions.

I was pulled in by your opening quote!

It really is interesting that books we read often have much written about food in them. I think this is a book that I'd probably be looking up lots of words...such as craic.