Sadly, the mistakes our society has made in the past remain with us seemingly forever. One cruel and despicable mistake that's been in the news recently is the practice of Blackface. I doubt if anyone needs a description, but here's a particularly insightful one from an op-ed in the New York Times yesterday:


"Blackface is a performance historically grounded in white supremacy and as such, an act of epistemological and ontological terror. In other words, blackface is a form of 'white knowing' (in reality, of white unknowing), of white projection, and of stipulating through performance of what it means to be black by way of lies about what it means to be white. Hence, to understand blackface, we must return to the white face that refuses to see itself in its own monstrous creations."

The article was titled: "Why White People Need Blackface: To understand this degrading practice, we must examine the white face that refuses to see itself in its own monstrous creations" It was written by George Yancy, professor of philosophy at Emory University. Yancy treats the practice of blackface as a way of making fun of blacks and alienating them from consideration as full human beings:


"Within the white American antebellum context and after, anti-blackness was at the very heart of white blackface minstrelsy. The black body functioned as the repulsive and revolting object of white disgust, with whites 'throwing forth' their hatred and lies onto what they themselves had created. White American blackface performers engaged in exaggerated and distorted gestures, warped dialect and racist clowning, all creations of the white American imaginary. As white performers blackened their faces with burnt cork, re-presented the black body in caricatured, silly, ersatz, inferior, horrible, and damnable ways, they were able to mark black bodies publicly as appallingly stupid and subhuman." 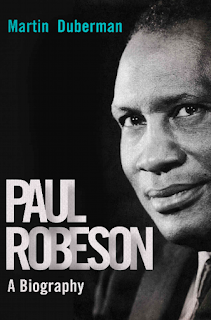 Recently, I've been reading  Martin Duberman's Paul Robeson: A Biography about the great singer, actor, and political activist Paul Robeson (1898-1976). Blackface was very much an issue during Robeson's debut as an actor in 1924 in two plays, The Emperor Jones and All God’s Chillun Got Wings  by Eugene O'Neill. In both plays, Robeson acted the role of a black protagonist: roles that had previously been played by white actors in blackface. The discussion of his being chosen for these serious roles provides interesting insight beyond the use of blackface as burlesque, illustrating what happened when a serious black character role was assigned to black actors:

"In March [1924], shortly before rehearsals for Chillun were to begin, Paul acquired additional experience by acting in a revival of Roseanne, by the white playwright Nan Bagby Stevens. The play, about a transgressing black preacher in the South saved from his 'avenging congregation' by Roseanne, had first been produced in 1923 with a 'burn-corked' all-white cast (despite the acclaim Charles Gilpin had received in 1920 in O’Neill’s The Emperor Jones, the long-standing practice of whites playing black roles in blackface remained widespread). But the revival at the Lafayette in Harlem in 1924 had an all-black cast, headed by Robeson as the preacher and Rose McClendon in the title role." (Kindle Locations 1320-1324).

The casting of Robeson in these three roles, was not only controversial (despite his distinct abilities), but resulted in near-riots and terrible harassment via letters and other comments from a widely racist public. Although a few years later, he was widely popular in London and New York as star of two hits -- Porgy and Bess and Showboat -- these early experiences are significant.

Later in his career, Robeson was passed over for roles where producers preferred to cast a white man playing in blackface. They refused to cast Robeson, an extraordinarily talented black actor, in serious roles. In 1928, the Metropolitan Opera chose to feature a white singer in blackface for a role as a black jazz musician in the opera Johnny Strikes Up the Band by Ernst Křenek. In 1933, an opera based on The Emperor Jones gave the title role to a white man in blackface in preference to Robeson, though a few minor black characters were played by black singers. While the Met may have evolved since that time, our society still has many perplexed issues with this fraught subject.

Another highlight of Robeson's career was his performance in the 1940s as Othello, which he achieved with great success. For at least a century before this production, most American versions of the great Shakespeare play had de-emphasized Othello's blackness, employing white actors in the role with at most a hint of dark makeup. These versions avoided the play's obvious racial issues. Robeson completely changed this; he expressed the "view that Othello was a great— and persecuted—'Negro warrior,' and that his own responsibility was to convey the tale of a man who had managed to rise to a position of leadership in an alien culture— only to be destroyed by it." (Kindle Locations 6264-6266).

Paul Robeson was a complex, multi-talented man of great genius. He was mistreated in many ways, and eventually became more and more dissatisfied with American society and racial attitudes.  I'm a life-long admirer of Paul Robeson. My father had huge respect for him, loved listening to recordings of Robeson singing spirituals, and was dismayed at the terrible treatment Robeson received at the hands of certain fanatics after World War II.

Parts of US history are extremely ugly. And unfortunately, the fallout from that history lingers on. So very sad. :-(

Robeson was an amazing man. I'd like to read more about him.

So glad you have been enjoying this book. He's such a great subject for a biography!

I've been reading a new book about the Weavers (singing group with Pete Seeger) and the blacklist. They worked with Paul Robeson and also struggled with accusations of communism. The early years of the Cold War were harsh ones for many Americans.