The Hare with Amber Eyes 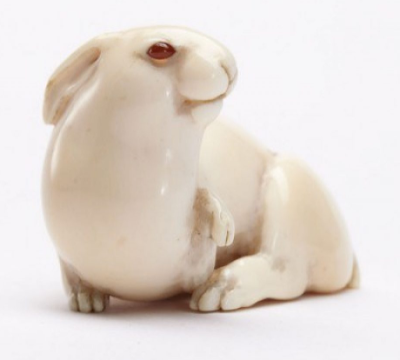 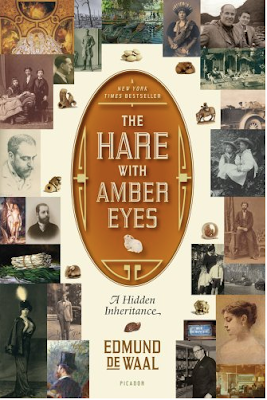 Another book to re-read and savor: The Hare with Amber Eyes by Edmund de Waal, published in 2010. The book is a family memoir going back into the author's great-great... grandparents in the nineteenth century. Writing the book required de Waal to research his family archives and historic documents, as well as to travel to places where they had lived.

How did he decide to begin this research? That’s the unusual part — he inherited a valuable collection of Japanese netsuke, the tiny figurines that were used to toggle garments and purses as a part of traditional Japanese dress, such as the eponymous "hare with amber eyes" from his collection (depicted above: source). These amazing miniature works of art are in themselves fascinating, but the resulting history of his family in Odessa, Vienna, Paris, and Tokyo is even more so.

The netsuke were first acquired by Charles Ephrussi (1849-1905). A wealthy connoisseur and art critic in Paris, he acquired them at the peak of a fad for Japanese art among Paris artists and collectors during the Impressionist era. When they became less fashionable, he gave them as a wedding gift to his cousin Victor Ephrussi in Vienna -- Victor and his wife Emmy were de Waal's great-grandparents.

The Ephrussi family were extraordinarily wealthy Jewish bankers and grain dealers. Their lives in Paris and then in Vienna were opulent -- but also threatened with constant and growing antisemitism. De Waal's discussions of antisemitism in Paris in the 1890s and Vienna in the twentieth century are very fascinating. Reading his account of the early days, and then the more and more virulent sentiments is horrifying.

The invention of modern antisemitism, de Waal points out, owes much to a popular demagogue named Edouard Drumont (1844-1917). Drumont's screeds included direct attacks on the Ephrussi family, who were examples of the nomadic Jews that he said could never be loyal citizens of France because of divided loyalties (yes, horrifyingly familiar from today's antisemites!) Drumont said:


"Jews, vomited from all the ghettos of Europe, are now installed as the masters in historic houses that evoke the most glorious memories of ancient France… the Rothschilds everywhere: at Ferrières and at Les Vaux-de-Cernay… Ephrussi, at Fontainebleau, in the palace of Francis I…"

De Waal continues: "Drumont’s ridicule of the speed in which this family has moved from being ‘penniless adventurers’ to this ascent into society, their attempts at hunting, their recently commissioned coats of arms, became vicious anger when he thought of his patrimony soiled by the Ephrussi and their friends." (p. 92).

As one reads the history of the Vienna family in the twentieth century, one knows what was going to happen in a general way. De Waal's description of the Nazi takeover of Vienna, the expulsion of his great-grandparents from their home, and the confiscation of everything except the clothes on their backs is vivid: it makes the history that you think you know all the more horrifying. Netsuke are very small, and the mob that looted their palatial home didn't recognize their value, so his great-grandmother's maid was able to hide them in her mattress and return them to de Waal's grandmother when she returned briefly to Vienna after the war.

The next owner of the netsuke was de Waal's uncle, Ignace Ephrussi (1906–1994), who had left Vienna for America before the disaster, and who, after the war, settled in Tokyo for the remainder of his life. He kept them in a glass vitrine in his living room, where de Waal saw them on a number of visits to his uncle (who left them to de Waal in his will).

This section of the book is much more pleasant to read, as this was one family member whose life was pretty uncomplicated, and who returned the netsuke temporarily to their place of origin. De Waal wrote about this era in the history of his netsuke collection:


"Here the netsuke became Japanese again. They lose their strangeness. They are surprisingly accurate renditions of the food you eat: clams, octopus, peaches, persimmon, bamboo shoots. ....

"One whole type of netsuke, the manju netsuke, is named after the small, rounded beancurd sweet cakes eaten daily with tea or given as o-miyage, the small gifts you present if you go anywhere in Japan. Manju are dense and surprisingly heavy, but they give slightly as you pick them up. When you pick up a manju netsuke your thumb expects the same sensation." (p. 305-306).

Last fall, after having kept the netsuke collection in his home for many years, de Waal decided to make most of them a permanent loan to the Jewish Museum of Vienna, and to sell a fraction of them at auction. He said: “The decision to place the netsuke on loan allows them to tell the story of migration, identity and exile to a new audience. In The Hare with Amber Eyes, I wrote of how objects can evoke histories through touch, and a stipulation of the loan is that a group will be available for handling by the many visitors to the [Jewish] Museum.” (source)
Posted by Mae Travels at 12:26 PM

What an interesting history. I sometimes see netsuke collections in Japan in museums and they are fascinating.

I love memoirs and think I'd love the way this one is structured around the netsuke.

I am going to track down this book. It always amazes me that we are supposed to learn from the past. Can't think of too many times that that has happened. Thanks for the rec, Mae.

I adored this book. It is a fascinating memoir, particularly the second and third sections where he had more first person stories (and less research), although I found the Paris part intriguing in many ways. But parts two and three really came alive. The stories. It changed the way I think of writing a family biography.

Wonderful book. Such an exciting story of a family and its fate. Hard to put down.

I did see this review a year ago! I should have remembered because I know that's the type of book you would find revealing and intriguing, as much as I did. You do write the best reviews!