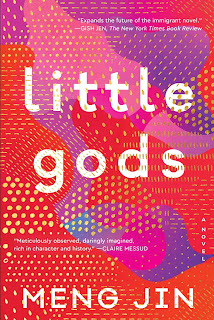 Meng Jin is a first-time author. Her book Little Gods was published early this year. I read it this week, and found it very appealing because  of the setting, which is both familiar and unfamiliar. The book begins in Beijing at the moment of the Democracy Movement of June, 1989. I remember this well not because I was there, but because my husband had students who were passionately interested in democracy for their home country of China, and during the month-long demonstrations they were in contact as much as they could be with friends and fellow students who were engaged in the events and in the tragic ending of the protests.

Little Gods presents several points of view about the protests, mainly the views of individuals in Beijing who were much less committed to the protests than the students who told us about what was happening. The book begins with the birth of a baby girl, Liya, in a Beijing hospital not far from Tienanmen Square where the protests were happening.

A series of vignettes  reveal the first seventeen years of Liya’s life, along with the history of her parents, friends, and caregivers. Her father, a committed supporter of the democracy movement, disappears into the void of violent repression of the Tienanmen Square protests. Her mother, Su Lan, didn’t agree with him. “Democracy fever, Su Lan called it, mingzhu bing. She hated that her husband had caught it. She did not believe he actually understood the issues or even cared. She accused him of using political fervor as an excuse to look away from a weakness inside himself.” (p. 136)

After Liya’s birth, her mother manages to return to her life as a physics student, and to move to America where she’s able to pursue her research while bringing up her daughter. The mother’s physics research is about the nature of time, which the daughter applies to her life and her search for identity. Although it’s not stated explicitly, the mother’s repeated changes of research advisers and schools suggests that her ideas are not accepted or respected, and she eventually gives up her goals for a more ordinary job.

A key to the lives of Liya’s parents and their fellow students in the 1980s is that being selected as a student of physics was a possibility only for the very top students, and was desired because it created a chance to study in America as few other disciplines did. This too is familiar from the lives of my husband’s physics students, some of whom moved on to fields that they found more appealing after they completed their PhDs. Also, after 1989, some of them were never able to return to China because of their open support for the protests, another part of history that helps understand Meng Jin’s book. 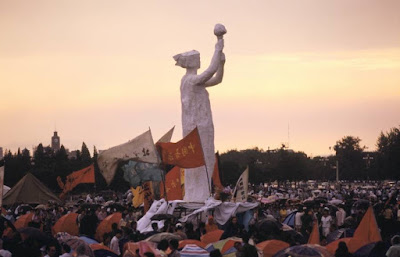 A hand-made statue of the Goddess of Democracy — a version of the Statue of Liberty — towered over the vast number of protestors in 1989, and this is the image that sticks in my mind, along with the destruction of uncounted lives at the hands of Chinese soldiers from far outside of Beijing. The memory of this protest means something quite different to the people in the story, and for this reason, I enjoyed learning how a modern Chinese-American, Meng Jin would write about the events that now seem far away and not in her personal memory. (Image from Wikipedia.)
One slogan of the protestors, printed on the t-shirts that we bought in 1989 in support of the students’ organization, was “You cannot massacre an idea.” Reading the book, I’m not really sure that the reality of another 31 years of Chinese history proves this hope. In a way, the fading of Liya's mother’s dreams of a career in physics seem to parallel the fading of the dream of democracy and a number of other characters’ dreams in this readable but rather sad tale. Unfortunately, the novel's ending is a bit fuzzy, not written as effectively as the well-thought-out early chapters, but it’s still a very interesting novel.
Blog post © 2020 mae sander.
Posted by Mae Travels at 6:30 AM

That was an interesting read. I remember when that happened, but didn't get caught up in the politics of it at the time. Looking back, I see there were opportunities for learning, as I did during Apartheid in South Africa about that same time.

To respond to your comment about sunflowers, in 2010, I was not using the same internet search engine I do today (DuckDuckGo). I'm sure had I used a better search engine, I would have found a lot more information than I was being handed. In fact, I had to laugh. I put my blog name for a Google search and it didn't even come up on the first page. I put it on DuckDuckGo and it came up first. Go figure. Google gives you what it wants you to see, at least it did back then. Now I'm wiser and am NEVER tracked when conducting an internet search.

I long for the day to come back when I can look for books at the library. This one does sound like an interesting look at these issues.

I remember these protests and the tanks rolling out. I bet this book is an interesting read. Too bad it was sad though. I would hope there is some improvement since 1989, but then China is not the US. Thanks for sharing Mae.

Many a dictator has tried to massacre an idea. Thank you for the review.