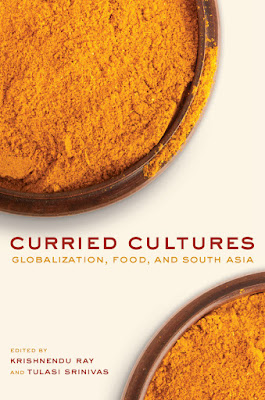 Curried Cultures: Globalization, Food, and South Asia, published in 2012, is an anthology of scholarly articles about food in India and in the Indian communities in the US and England. It includes studies and observations about restaurants, restaurant owners and workers, food in various communities and social classes in India, interactions between food, religion, and caste in Indian society, immigrant communities and how they work, and more.

"Teaching Modern India How to Eat: 'Authentic' foodways and regimes of exclusion in affluent Mumbai" by Susan Dewey (pp. 126-142) is a particularly interesting offering in Curried Cultures. The book is much too varied and has far too much material to summarize as a whole, so I'd like to summarize just this one article as an example.

The author begins with two quotations. The first is from the famous Indian-British food writer Madhur Jaffrey, who points out that Americans crave authentic taste: "Anything fake is deplored, fake foods included." The second quote is from Rahul, a restaurateur in Mumbai, who says "So much of what we call 'fusion cuisine' is really just confusion... I want to teach people ... to really understand that authentic cuisine is all about the subtleties of differences." At the start, Dewey makes the observation "Foodways constitute a powerful means by which individuals demonstrate their membership in privileged groups," a process that's "intensified in Mumbai." This huge metropolis, with tens of thousands of eateries incorporates many interesting features: enhanced upward mobility, opportunities for women's careers, a substantial media industry, and many foreign influences, including residents who have spent time abroad.

"Connections between food and power have extremely deep roots in Hindu South Asia, and prohibitions on the exchange of foods between individuals of different castes, genders and ethnicities" are an important component of the way food establishments are run there, Dewey observes. For Brahmins, especially, "taboos on food exchange and consumption are still alive and well." In addition, for all Hindus, there are religious views on how to balance food consumption, such as the ideas of "hot" and "cold" nutrients. Restaurants serving Indian food reflect these and other concepts of authenticity in local foods. At the same time, the cosmopolitan nature of the city has enabled many international restaurants and festivals of foreign food and alcohol (once absent from Indian culture) to become popular: American fast food, fine French wine, Middle Eastern dishes, Thai cuisine, Chinese food, and more.

The huge gap between wealthy jet-setters and the six million inhabitants "who have no housing at all" affects everyone, including restaurateurs and their customers. There's a large range of offerings in this context, from street food vendors at the low end to exclusive, members-only restaurants where the rich can pay enormous prices to avoid contact with those that they deem unsuitable (or maybe untouchable). An interesting example is restaurants that prepare the same dishes that are traditionally made by itinerant vendors, but serve the street cuisine with more class, and claim to be more hygienic than the street vendors.

Regulation in the name of hygiene and high standards is often used to intensify class differences and control the poorest and least attractive vendors. Between the lowest and highest establishments, there are many possibilities. Trendy restaurants in upscale shopping centers, for example, cater to ambitious socially mobile young people. Many aspire to become more modern not only by adopting Western culture and by traveling, but also in choosing lifestyles that imitate Western notions of fitness and health, for example, via membership in exclusive fitness centers or with personal trainers, as well as trends in dining. The author's detailed description of this trend is very interesting. I learned a lot from Dewey's article, and especially from her many specific vignettes of life in Mumbai.

On the whole, Curried Cultures is a very hard book to read because many of the authors write in painfully stilted jargon. For example, the first sentences of the Introduction by editors Krishnendu Ray and Tulasi Srinivas:

I don’t object to jargon when it is needed to express complex thoughts, such as the language used in scientific papers. Most of these articles, however, could be written in perfectly good standard English without any loss of meaning, and with considerable added clarity and readability.

I wish a competent journalist could be employed to revise this book, but that will never happen! However, many journalists do write about this topic; for example, in this week's online "Taste" magazine, you can read "The Curry Powder Has Left the Curry," a survey of curry in cuisines in Asia, the New World, and more. Or you can read the very well-written and researched book Curry: A Tale of Cooks and Conquerors by Lizzie Collingham. I've reread this book often since its publication in 2006. It's often cited as a classic by the authors in Curried Cultures.

I know I will not read this book, but I loved reading your review of it.There are so many subtleties in foods from different areas that I could never wrap my pea-brain around them.

Good review, but I won't be reading it after trying to decipher the first sentence of the introduction you quoted. Whew!

From your excerpt it sounds more like a thesis than a book. I wonder who the top restaurants employ to cook and clean?

You made me, it just arrived on my kindle.
Looking forward to read it, if it´s rather tough... (and expensive! If a hardcover it sells for €75!).
I love this food and I see how ... Italian, Indian etc gets transformed to "our taste" and that´s a waste.
I remember how in Jamaica a German man wanted German liverwurst. Well, stay home then, I thought (today I´d say it).

I'm checking out your Taste magazine link. Thanks!

I enjoyed your review and the subject, but I don't think I would enjoy deciphering the language inthis particular book-

This professional book editor will give this title a pass.

Glad you read it for me.
I think trying different food when travelling is one of the highlights.

I certainly like eating curry! The Taste article was interesting, I did not know there were so many different sorts of curry.

I'm not a huge curry fan but I do appreciate your review of this book.