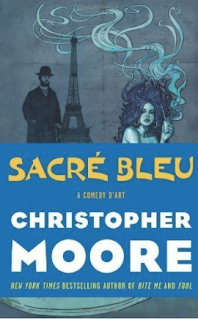 Author Christopher Moore has a very strange imagination, which is given free range in his novel Sacré Bleu. The principal character in this fantasy, which takes place between around 1870 and 1890, is a baker named Lucien who lives in Montmartre. Every morning his mother tests the quality of their just-baked bread by banging him in the head with a loaf; if it cracks just right, they're happy.

In addition to baking, Lucien is an aspiring painter. Though fictitious, he's surrounded by real painters and other figures in the artistic milieu of that time and place -- Toulouse Lautrec, Monet, Renoir, Theo Van Gogh (an art dealer and brother of the painter), Seurat, Gaugin, Whistler, Oscar Wilde and lots of others. An unusual feature of this novel: the hardcover version that I read is illustrated with paintings by the artists who appear in the story.

Sacré Bleu begins with the death of Vincent Van Gogh, and quickly moves on to Paris and many other real and fictional characters. When I started reading, I thought I would be bored by just another historical novel about the bohemian life of the Impressionists that's so well-known.

Wrong!! It's a very strange and magical story about the color blue, the pigment ultramarine which comes from the stone Lapis Lazuli. It depicts a very vivid -- and imaginary -- figure called "The Colorman" and an even more mysterious woman who has many names and identities as she seduces one artist after another. These two supernatural beings, it appears, have interfered in the lives of artists throughout time. As the novel proceeds, the plot involves the efforts of Lucien, Toulouse-Lautrec, and a few others to discover just what role these evil spirits or maybe genies have played. More plot summary would spoil the suspense (yes, suspense!) as well as being kind of tedious.

I once heard a lecture about the amazing pigment ultramarine. It was extraordinarily expensive, and was especially desired for images of the Virgin Mary during the Renaissance. The fantasy that Moore weaves about it is much more amusing than the real history!
Posted by Mae Travels at 6:00 AM