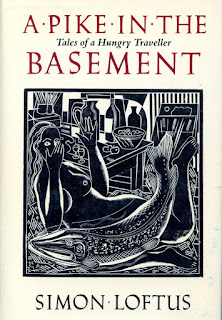 "Edible history is the most vivid testimony to vanished empires. ... Artifacts and institutions disappear, but the gastronomic archaeologist will still be able to trace the influence of India in the English addition to curry, and to find, as I did, that the most poignant evidence of our former glory is the survival of porridge in Pakistan." -- A Pike in the Basement, p. 57.


Sometime in the 1980's British wine merchant and writer Simon Loftus wrote "tales of a hungry traveller" (to spell it Britishly). He did go to a lot of places. Some in the depths of Asia. Some in the Deep South of the USA where his friend Calvin Trillin sent him in search of barbecue and catfish. He explains the word for hot food to use when ordering in Greece, and describes nightmarish train trips through obscure parts of the world. He also dined, sometimes with disdain, at widely acclaimed restaurants in big and famous cities like Paris, New York, Las Vegas, or London. He always has something clever (almost too clever) to say about the food and -- especially in the case of pretentious big-city restaurants -- about the people who served it.

In every case, he offers some sort of recipe connected to his tale. At times the recipe choice is bizarre, as in the case of a memoir of a duck named Donald. House pet Donald Duck was chummy with the family's pet cat during Loftus's childhood. Unfortunately Donald was killed by an aggressive pet dachshund. The recipe for this chapter explains how to bone, stuff, and roast a duck. Similarly, Loftus offers a long description (mainly quoted from an early 19th century memoir) of a pig that was trained to "point" to game, helping hunters just as a pointer dog would do, and demonstrating its great loyalty and intelligence. The recipe for this chapter: a sausage and bacon casserole. Oh well. I guess if you're an omnivore, you're an omnivore.

It's a mildly amusing book to read, not too long, the kind of little articles that once appeared in magazines like the late lamented Gourmet. If Loftus first published these essays one by one, I wasn't able to discover it. The illustrations -- black and white woodcuts -- are also amusing. A nice little book for a cold winter vacation day at the end of the year.
Posted by Mae Travels at 8:40 PM

Where did you find your copy? Sadly our library system doesn't have it, though they do have several technical books he wrote.
Happy New Year to you Mae!

Claudia -- I bought the book at a local used bookshop. It's also listed on amazon -- though it's around $15 for either one. Some libraries have arrangements for loans of books in other locations in your state as well. I also like Loftus's book titled "Puligny-Montrachet: Journal of a Village in Burgundy."