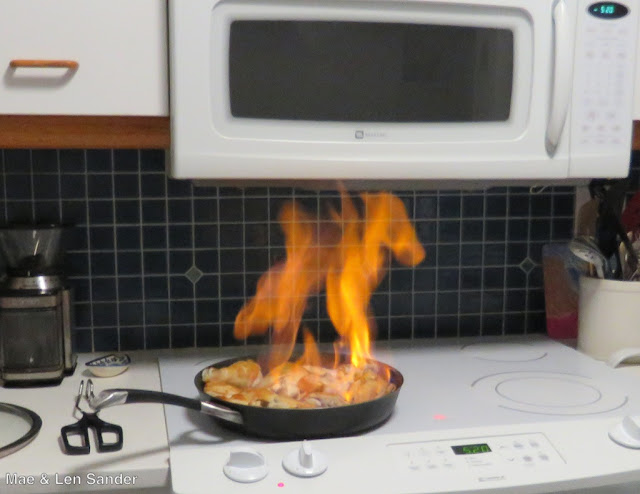 Flambéing is the most fun part of making Poulet à la Normande, a chicken and apple dish from Normandy that recently appeared in the New York Times (here). The instruction "use a long kitchen match to light the liquor on fire" is a good one to obey! The flames did shoot around 2 feet high as noted. A short match would be a bit too scary. 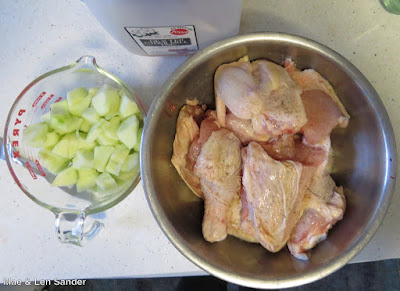 As it happened, I had a jug of local cider that I'd been neglecting and therefore allowing to ferment in my refrigerator for a few weeks. Perfect! I also had the recommended pearl onions and sour cream to finish the sauce. The apples cut in chunks and a chicken that I cut up myself, as shown, were the remaining ingredients. 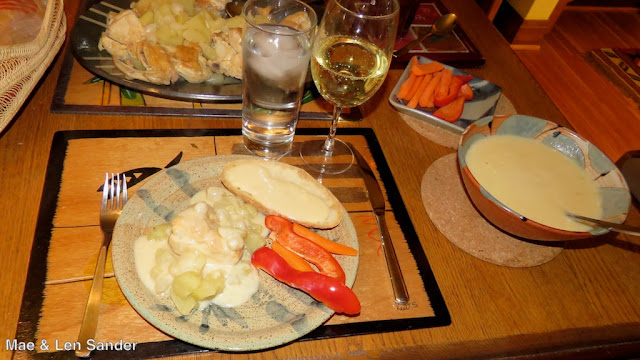 Eating the chicken is of course almost as much fun as setting fire to it. In the bowl at right, you can see my smooth sauce containing the cider mixture from braising the chicken, the sour cream, and some cornstarch to thicken it. On my plate you can see some of the sauce on bread, as well as on the chicken. The recipe recommended a side of salad, but we had carrot sticks and bell peppers for crunch and color. Other than setting fire to the liquor, it's not really a particularly difficult recipe compared to other classics from France.
Posted by Mae Travels at 7:46 PM

That looks delicious and very impressive! And it looks very tasty. Fire sounds good about now --it's a tad on the cold side!

Flambe is indeed fun! I'll have to check out the recipe.

This looks delicious, but I'm not sure I'm brave enough to flambe.

Flambe dishes are so dramatic! I have those same ingredients on hand so I should try your recipe this weekend. :)

You fire bug:) Now I want to do that, using my lighter stick maybe. What a delicious sounding recipe.

La La in the Library said...

You are so brave!.I am so afraid of my kitchen catching on fire I will not even deep fry. Ha ha. :)