"My Family and Other Animals" 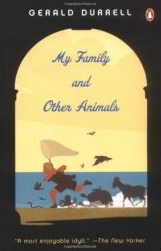 "I was sitting in bed reading one night when, with a great whirring of wings, Cicely flew across the room and landed heavily on the wall, some ten feet away from where Geronimo was busily cleaning up the last bits of an exceptionally furry moth," writes Gerald Durrell in his memoir My Family and Other Animals. Cicely was a mantis and Geronimo was a gecko, and both were being kept by the ten-or-eleven year old Durrell in his family's villa on the island of Corfu, where they had decided to live for a while to escape the unpleasant English climate.

Although Durrell wrote the book years later, with an adult perspective, he manages to preserve his childlike view that all the animals he brought into the house were really like people -- he animates them with intentions, emotions, and thoughts. The fight between Cicely and Geronimo continued: "Amazed by her size and taken aback by her effrontery at settling in his room, Geronimo could do nothing but stare at her for a few seconds. Meanwhile Cicely turned her head from side to side and looked about with an air of grim interest, like an angular spinster in an art gallery. Recovering from his surprise, Geronimo decided that this impertinent insect would have to be taught a lesson." The battle continued for two more long pages -- and the author, though he viewed himself as a naturalist, attributes very human motives to each of these creatures, as he observes them. (p. 182)

Even flowers and trees sometimes have thoughts and intentions: "... no matter how hot it was below in the valley, up in the three olive groves the tiny wind played constantly, the leaves whispered, and the drooping cyclamen flowers bowed to each other in endless greeting." Or "I was leaning against an olive trunk that had spent the past hundred years growing itself into the right shape for a perfect back-rest." (p. 205-206)

Durrell's patience and vivid observations also extend to the relationships between the members of his colorful and eccentric family, their servants, the Greek people who help them adapt to life on Corfu, his various tutors, and an adult naturalist that helps him collect and (sometimes) domesticate such animals as two magpies, a black-backed gull, several dogs, a matchbox full of scorpions, a pair of water snakes, several tortoises, and others. The stories of the animals and how his mother, sister, and brothers reacted to them are amusing or even laugh-out-loud funny -- for example, the time one of his brothers appeared during a party at the villa in nothing but a bath towel because the water snakes were cooling off in the bathtub where he was intending to bathe.

In another episode where the magpies escape their cage and destroy his older brother Larry's papers (this is Laurence Durrell, the famous writer, presumably before he became famous) -- the young Gerry's attitude becomes too much: "It's disgusting the way this family carries on over animals; all this anthropomorphic slush that's drooled out as an excuse. Why don't you all become magpie worshippers, and erect a prison to pray in?" says Larry (p. 213-214)

Throughout My Family and Other Animals,  Durrell amuses the reader with all sorts of little episodes of family drama and descriptions of the way he, as a child, saw the natural world. I was interested in some of the descriptions of food and food preparation as he presented them. As an English family the Durrells were made very welcome by the peasants who lived in their area, and Gerry discovered that if he dropped in at various farmhouses, he would be welcomed with food, as well as learning local lore about the resident creatures..

"There was not a single peasant house you could visit and come away empty," he began one such narrative, and described how he contrived to awaken a peasant named Yani, who showed him how to make an antidote to scorpion poison, and then calls for his companion Aprodite to bring "a tin tray on which was a bottle of wine, a jug of water, and a plate with bread, olives, and figs on it. Yani and I drank the wine, watered to a delicate pale pink, and ate the food in silence." As he leaves Yani, he also receives a bunch of grapes "as a parting present." (p. 52-57)

Durrell's mother was deeply interested in cooking, and brought many cookbooks with her from England for their stay in Corfu: "spring for Mother meant an endless array of fresh vegetables with which to experiment, and a riot of new flowers to delight her in the garden. There streamed from the kitchen a tremendous number of new dishes, soups, stews, savouries, and curries, each richer, more fragrant, and more exotic than the last." Sister Margot, in fact, recommended going on a diet in response, mentioning "the orange-juice and salad one... the milk-and-raw-vegetables one... or the boiled-fish-and-brown-bread one." Brother Larry says: "I shall be taken from you at an early age, suffering from fatty degeneration of the heart." (p. 68-69)

I have no idea of whether the Durrell family was as colorful and eccentric as they are depicted in this entertaining book, but it's definitely fun to read. I've never read anything by Laurence Durrell, the more famous brother, but when (or if) I finally get around to reading his work, I wonder if I'll find it nearly as enjoyable as this little book.

Did you watch "The Durrells in Corfu" on "Masterpiece" this fall? It was enchanting and really makes me want to read both Gerald and Laurence's books. It was beautifully cast and just charming. There were liberties taken with the reality (in the series Larry and Nancy hadn't yet married) but taken as a delightful entertainment and not totally historic record it is well worth searching out.

Thanks for this very thorough and fun review!

I adored this book - I read it in my early teens, many moons ago.
I watched the tv show based upon it quite recently and was very disappointed.