"But the Crackling is Superb" 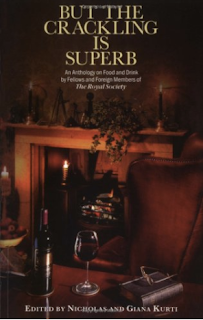 The selection for tonight's discussion at my culinary book club was a collection of brief essays and other types of short work about food by Fellows of the British Royal Society, published in 1988. Some of the writings were amusing, some serious. Some were pretentious, others represented very insightful scientific observations. Most of them came from living scientists but a few were historic.

Although there were many intriguing pieces, quite a few made us think that sometimes people who know something well think that they therefore know everything. That is, there were some rather trivial observations passing as profound. The collection also included some very-bad-sounding recipes.

We all enjoyed several very interesting excerpts from the work of Benjamin Thompson, Count Rumford, who invented a kind of percolator for making coffee long before others thought of such a thing. (In his time, coffee was made by boiling coffee and water in a pot and then straining out the chewy bits.) Count Rumford also invented a recipe for soup kitchens to make to nourish poor people, and several other very practical things. We discussed him a bit-- he's a fascinating character.

Before the meeting, Len and I ate dinner at a very new restaurant near Motte and Bailey bookstore where the culinary book club meets. The new place, called Miss Kim, serves Korean fusion food, which we quite enjoyed.

Miss Kim's real innovation is that it's a no-tipping restaurant -- maybe the first one around here. All prices on the menu, as they say in France, are net prices. The bill is the sum of these prices plus obligatory state tax. That makes a lot of sense, as the front-of-house staff and the kitchen staff are all supposed to be paid fairly, including benefits. Since it's a new restaurant, they don't have to change employees' expectations either, which has apparently been a problem in restaurants that switched from tipping to non-tipping, at least in New York.

From Miss Kim's website: "As a no-tip restaurant, we pay our staff a living wage that is not dependent on gratuity, with full benefits. Keeping with Korean culture, the price includes food and hospitality—there is no need to add anything extra. At Miss Kim, what you see is what you get."

I have been spending some time reading all your back posts. You have traveled and tasted many cuisines. I miss all of this now with Jims’ Alzheimer. His taste bud is about gone and it is useless cooking fancy food for him. Yesterday I made a special omelette with herbs, Boursin, and several other things and gave it to him with a piece of toast. While my back was turned he poured ½ the jar of homemade fig jam on the omelette…I was not pleased. As for traveling, it is too difficult now. I see you noticed that you saw the sculpture garden in DC. I was hoping to go there to take pictures for my friend Naomi Hirshhorn. She saw it when it was opened, I think it was in 1974, but not since then. I did get to the Hirshhorn’s house on Long Island (her family house) a while back and took pictures for her.
Trader Joe’s is one hour from me but I love to go there. When we finally move to Nashville, there is a TJ about 1 mile away … c’est super!

I really like the idea of a no tipping restaurant and the photos of the food are gorgeous and look delicious! The book sounds interesting if not memorable and I think I'll pass on the rather bad sound recipes!