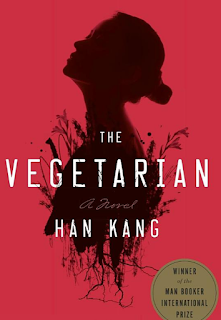 I've just read The Vegetarian by Han Kang, a best-seller that won the international Booker Prize last spring. I knew little about it, other than that it was translated from Korean, and I chose to read it because it won the prize. I enjoy reading books that depict the lives of characters in countries that are very unfamiliar to me. Among other things, The Vegetarian offered many details that made me see both differences and similarities between modern life in South Korea and here in America.

As I read, I enjoyed the strangeness of the characters, especially the title character, a not-too-young woman, Yeong-hye, (maybe thirty-five?) who suddenly can't stand to eat meat because she's had a terrible dream. No one including the reader can really understand the dream. And apparently Korean food ways, at least in her environment, involve eating meat or fish at virtually every meal, unless you go to a Buddhist vegetarian restaurant.

The Vegetarian has three sections. Each section depicts the ineffective attempts of various family members to rescue the woman from what more and more obviously are delusions. In the first section, we read about the relationship of the woman with her husband, a very ordinary white-collar worker who wants a very conventional and unchallenging life. In the second, her husband has left her and she has a very surreal erotic encounter with her sister's husband, a video artist, who selfishly exploits her weakness. At the end of this section, the artist also disappears from the lives of the two sisters. In the third, Yeong-hye, now in terrible condition,  is in a private psychiatric facility, which we see through the eyes of her sister. The lack of understanding for Yeong-hye's suffering is the predominant theme in each section, as attempts at persuasion become more and more violent and abusive, beginning when her father, in the first section, tries to force a chunk of meat into her mouth, and ending with force-feeding in the hospital.

Of course I also enjoyed the depiction of Korean society that provides the background for the increasingly dramatic downward spiral of the woman, who is more and more obviously having a terrible breakdown. Not that I want to be an air-head, but I can't help noting that one thing the central character just once ate with pleasure was shave-ice, which is a Korean treat served with cream and fruit, an interesting thing about Korean food preferences! The food descriptions in the early part of the book were less surprising.

All in all, if the vegetarianism in the book is meant as some sort of social commentary, I have really missed the point -- the central character's aversion to eating meat always seemed to be presented as a personal and irrational part of the woman's mental breakdown.

When I reached the end of the book, I read the author bio, and learned that Han Kang, born in 1970, among other things participated in a University of Iowa International Writing Program in 1998. Somehow this seemed right to me, because I felt as if the novel had a familiar approach to depicting the lives of ordinary-yet-nonstandard middle-class people with trauma, an approach to writing that is associated with American writers in such programs, though I'm really not entirely sure of this. So I suspect that Han Kang's approach to writing is compatible with this familiar stream of American literature.

After writing the above paragraphs, based on my untainted response to the novel, I looked up the New York Times review by Porochista Khapour, dated February 2, 2016. The reviewer completely disagreed with my response to the book, writing:


"All the trigger warnings on earth cannot prepare a reader for the traumas of this Korean author’s translated debut in the Anglophone world. At first, you might eye the title and scan the first innocuous sentence — 'Before my wife turned vegetarian, I thought of her as completely unremarkable in every way' — and think that the biggest risk here might be converting to vegetarianism. ... But there is no end to the horrors that rattle in and out of this ferocious, magnificently death-affirming novel. ...

"For a danger here would be to focus only on the ethnographic and sociological. In Britain, where 'The Vegetarian' landed on The Evening Standard’s best-seller list, reviews tried to make sense of its strangeness by attributing it to the culture. 'The narrative makes it clear it is the crushing pressure of Korean etiquette which murders them,' The Independent daftly concluded. Other British reviewers tried to emphasize that vegetarianism is impossible in South Korea. Likewise, a contemporary Western feminist lens could also yield a condemnation of the novel as an exercise in female debasement or 'torture porn.' But this would again assume a problematic normalcy and measure the book against it. There is an entire world of literature outside the West that is not adapted to our markets, in debt to our trends or in pursuit of our politics."

I just heard a glowing review of it on Fresh Air today but it sounded a little strange to me. I'm sort of longing to go back into the mystery world. My Brilliant Friend is wearing me down.