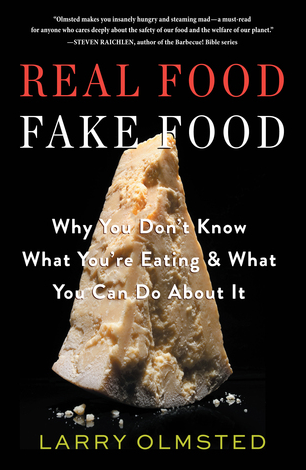 Soon-to-be available at amazon.com: Larry Olmsted's book Real Food/Fake Food: Why You Don't Know What You're Eating & What You Can Do About It.

I've seen reviews and one excerpt that really make me want to read it soon! It fits perfectly with my interest in food safety and food frauds, as well as in cooking wholesome food. I'm afraid there's too much fakery going on to fit in just one book, but this looks like a good start.

From Olmsted's excerpt of his own book in "Eater":


"Food fraud is a sophisticated $50 billion annual industry, according to Michigan State University's Food Fraud Initiative, and while many of the nation's scams occur in grocery store aisles and retail shops, what has surprised many readers of my new book Real Food/Fake Food the most is the Wild West of restaurant menus. There’s a perception that spending more or visiting 'name' chefs is an insurance policy against counterfeits, but that’s not really true. Food deceptions are institutionalized in the food-service industry: Some occur further up the supply chain, and many are in fact perfectly legal, even if morally outrageous. ...

"Besides aggressive adjectives, Kobe beef, organic seafood, and red snapper, the other huge red flag is truffled anything. Real truffles, especially the prized black and white varieties from Alba, are one of the world’s most prized — and rare — foods. Shaved in front of you over risotto, these are heaven for many diners. But truffle oil has nothing whatsoever to do with truffles. It is a made up substance, manufactured just like perfume, entirely fake and chemical.

"It’s not like before some chemist invented the inaccurately named truffle oil your corner bistro was shaving fresh truffles over fries, mashed potatoes, and popcorn. Like priced too-good-to-be-true "Kobe" sliders, these recent "truffled" comfort food fads exist only because of the cheap bottled solution. The presence of such dishes on the menu suggests a willingness to take low quality shortcuts and play fast and loose with food descriptions. This calls everything else on the menu into doubt, and given the recent evidence, that’s saying a lot." -- from "How to Avoid the Most Common Fake Foods on Restaurant Menus" by Larry Olmsted, July 14, 2016


"Fraudulence spans from haute cuisine to fast food: A February 2016 report by Inside Edition found that Red Lobster’s lobster bisque contained a non-lobster meat called langostino. In a statement to The Post, Red Lobster maintains that langostino is lobster meat and said that in the wake of the IE report, 'We amended the menu description of the lobster bisque to note the multiple kinds of lobster that are contained within.'...

"Unless your go-to sushi joint is Masa or Nobu, you’re not getting the sushi you ordered, ever, anywhere, and that includes your regular sushi restaurant where you can’t imagine them doing such a thing, Olmsted says. Your salmon is probably fake and so is your red snapper. Your white tuna is something else altogether, probably escolar — known to experts as “the Ex-Lax fish” for the gastrointestinal havoc it wreaks.

"Escolar is so toxic that it’s been banned in Japan for 40 years, but not in the US, where the profit motive dominates public safety. In fact, escolar is secretly one of the top-selling fish in America.

"'Sushi in particular is really bad,' Olmsted says, and as a native New Yorker, he knows how much this one hurts. He writes that multiple recent studies 'put the chances of your getting the white tuna you ordered in the typical New York sushi restaurant at zero — as in never.'" -- from "Everything we love to eat is a scam" by Maureen Callahan, July 10, 2016

You can see what I mean about this book! Thanks to my friend Gene at Motte and Bailey for the link to the NYP article!
Posted by Mae Travels at 9:54 AM

I have a copy of this! I really need to get to it. I agree, it looks like a great read.

I had heard this about sushi before.

I had heard this about sushi recently.

This sounds like an interesting reading and a scary one! I try to use all real ingredients so it'd be interesting to learn all the ways I'm getting scammed and hopefully ways to avoid it!

This sounds like a book that will really scare me. I hope there are suggestions on how consumers can protect themselves.

I'm pretty careful about what I cook myself, but need to be more aware when eating out. That book sounds like a good wake-up call for all us consumers.

I think most people would.not.care! It's all about taste. It rules everything, it seems to me. Why people are fat and unhealthy - all in this book!

That tuna thing is a worry! Have a great week. Cheers from Carole's Chatter

When I started making baby food for my eldest, I started becoming more and more aware of what I was putting in my body as well as my daughter's. It's scary just how processed foods are and how Big Industry has people hooked on all of the things that are so bad for our bodies. I'll need to check this one out!

This is scary, Mae! I need to get myself a copy pronto!