The other day, I mentioned a plan to read Real Food/Fake food, a recently published book by Larry Olmsted. I've now read it, and find much of interest. He describes a number of frauds that leave me wondering whether people may even like to be fooled. One big question in my head: are there actually people who get something, some satisfaction, out of knowing there are counterfeits? Not just make money by counterfeiting, but who like to see someone else fooled? Does it do something for their egos?

Many of the foods under discussion have a great deal of status in the realm of fine dining and also in the realm of food snobbery. The bizarre thing here is that often, it's the snobs who are fooled the most, and the only people who could be taking any satisfaction are the people who perpetrate the frauds and make money at their expense. I'm really enthusiastic about this book because it confirms many of my suspicions about "foodies."

Just being aware of the high reputation of Kobe beef, for example, might make someone feel like a food expert. Olmsted describes the raising of the special breed of cattle in Kobe and the taste of Kobe beef as he's tried it in certified restaurants in Japan. He also describes how widespread and falsified Kobe beef offerings are in the US -- it's easy to know which products are falsified in these places because the actual Japanese product is NOT AVAILABLE here. Basically the word "Kobe" has been applied to so many US products that it doesn't mean anything here except an unjustifiably higher price.

Similarly Olmsted discusses truffle oil, which is another status symbol that justifies excessive prices and appeals to people who want to seem expert in food matters. Actually, he explains, you can't really infuse truffle flavor into oil, it doesn't work that way. Truffle oil is made with artificial chemicals, and gets its appeal from the fact that virtually no one in the US has ever tasted real truffles. Another con game!

One major strength of the book is its deep interest in what the author calls "Real Food," by which he mainly means foods and also wines or spirits that are grown, prepared, and produced with serious and traditional work in specified locales. He explains much about the fundamentals of the following foods: 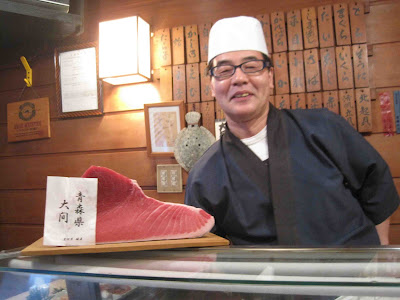 In the US, according to Olmsted, sushi is one of the biggest con games. I'm glad we have managed to eat sushi in Japan a couple of times. For example on the 2011 trip, we sat at the sushi bar in a tiny restaurant while this chef made us sushi -- he bought this amazing piece of tuna at the Tsukuji market that morning. According to Olmsted, it's extremely unlikely that "tuna" is the real thing in an American sushi restaurant -- even in the best of New York.

In each case, you can learn about the real food, and also about the frauds in its name, if any. Interestingly, there don't seem to be any fake Scotch Whiskeys, according to Olmsted, but there are definitely fake Port Wines at unbelievably HIGHER prices than the original, fake Champagne and other fake wines, fake cheeses of many types, and incredible frauds in the olive oil market. He tries to explain the half-witted explanations that the perpetrators use to kind-of justify their misdeeds, but it's always clear we're talking about fraudsters. If this type of fraud interests you, you should read the book, because he does an excellent job exposing the widespread con game!
Posted by Mae Travels at 4:55 PM