Everything you didn't want to know about food 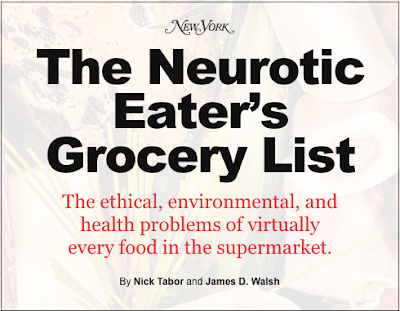 I've occasionally written briefly about issues of ethical food, safe food, healthy food, and quality in food. Grub Street/New York Magazine writers Nick Tabor and James D. Walsh have now put together every possible objection to a just about every food I can think of: "The Neurotic Eater's Grocery List." Don't read it if you are squeamish about animal welfare, environmental destruction, or dangerous microorganisms in your food. The authors also include a few remarks about politics reflected in the grocery aisles.

Here are a few notable quotes from the article:

The authors don't even mention pesticides on produce until the end of the section about fruit and vegetables, when they say:


"But really, pesticides bathe just about everything. About 1.1 billion pounds of pesticides are dumped on crops in the U.S. annually, and the farmers exposed to them have higher rates of cancer of all kinds: leukemia, non-Hodgkin’s lymphoma, multiple myeloma, and soft-tissue sarcoma as well as cancers of the skin, lip, stomach, brain, and prostate."

Is that paranoid enough for you? Read it and weep, or maybe read it and gag.
Posted by Mae Travels at 8:05 AM

Ugh. I've gagged enough just reading your summary of the article. Sounds like something I should read, though. Thanks for the heads up.