"German food definitely has a bad rep in culinary circles, and I would say undeservedly," writes Evelyn from Augsburg, where she and her family are spending the summer with her in-laws. She continues:

Yes, wurst, potatoes, schnitzel, and spaetzle are common dishes, but the unsung German emphasis on fresh unadulterated ingredients, and the willingness to place those ingredients front and center of a meal are exactly what the entire slow food movement is based on. 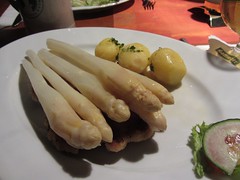 This time around, we missed white asparagus season, but people go crazy for it. My first experience was many years ago when a cousin got a tip on a farmer who was about to harvest his white asparagus. He took orders from all the aunts, uncles, and cousins in the family, drove to the farm before sunrise -- if it is not harvested before sunrise, the asparagus turns green and chewy rather than pristine white. He spent the rest of the day on family deliveries. I was told that pretty much every stalk of white asparagus in the country is coveted in this way. (Illustration from a previous trip in season by Mae.)

The Viktualienmarkt in Munich contains many stands featuring chanterelle mushrooms: Pfifferlinge. Every traditional German restaurant and Gasthaus has an added seasonal Pfifferlinge section of the menu.
We got our sandwiches from Nordsee, a chain featuring seafood dishes. At two for 4 Euro, I chose pickled herring on a baguette (known as a Bismarck Bagette) and smoked salmon with hard boiled egg slices and aoli. For an extra Euro, I picked up a water flavored with lemon and fresh mint.

One just has to live with the fact that ordering tap water is not a legitimate option. One might be calmed by knowing:


Perhaps the cakes already have the reputation they deserved. In the last two days, we have had home baked rhubarb cake (photo), apple tart, and a "bee sting cake" - a cream filled cake topped with almonds and honey.

My personal favorite cake is a prune plum cake called Zwetschgendatschi. It is a local specialty only available in this particular region and only in the prune plum season. Every local person seems to have their own special recipe.

Zwetschgendatschi is of sufficient importance that it features prominently in the children's story Der Räuber Hotzenplotz, in which two children must go on a quest to retrieve a grandmother's stolen coffee mill. If they are unsuccessful, the grandmother threatens that she will never make another Zwetschgendatschi.

Beer cheaper than water????? :) Great post. Thanks for sharing.

What a fun post! Delighted to "meet" you, Evelyn. And happy to have that beer tip. :-)

Ha! When in Germany, drink beer! Love your photos -- those pastries look amazing.

It's been many many years since I traveled in Germany but I loved all of it. I agree, some people thing of wurst as the representative cuisine but I remember enjoying many healthy home cooked meals. Great post.

I don't know why German food would have a bad rap in culinary circles. I grew up with an aunt from Germany, and I remember loving everything she made.

I have been to Germany a few times and loved the food.

What a fun post! I read a book not too long ago and they mentioned asparagus season. I've never been a big fan of the vegetable but now I'm thinking I need to give it another try to see what I'm missing!

Just going by your post, I would go to Germany just for the food! I've heard Oktoberfest may not happen this year, due to pork products and beer offending some? And no more sausages in the public schools now.

Claudia --
Munich's Oktoberfest for 2016 plans plenty of beer AND sausage. Their webpage:
http://www.oktoberfest.de/en/navitem/Beer+Tents/

Snopes has a very detailed report on a number of false rumors about pork being banned in German (and also in English) public schools. The summary: "Germany hasn't eliminated pork or sausages from school canteens to appease Muslims." See this snopes article:
http://www.snopes.com/germany-bans-pork-under-sharia-law/

Amazing how these rumors are amplified!