Whose Nutmeg is it Anyway? 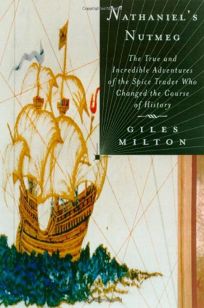 Nathaniel's Nutmeg OR The True and Incredible Adventures of the Spice Trader Who Changed the Course of History by Giles Milton is the selection for my culinary book club's meeting this coming Wednesday. I've now finished reading it. It's pretty disappointing, although there's some interesting history in it. It looks as if it's been reasonably popular with other readers, since there are many many editions of the book and it gets 4 stars average out of 107 amazon reviews. I'm looking forward to hearing the reactions of my fellow readers.

Although the book depicts the rivalry among European powers to control the important spice trade from around 1500 until the 19th century, it's not exactly a food book. It's about ships, wars, sailors, natives, cruelty, hardships of many sorts, and death. The goal of the expeditions described is spice, especially nutmeg, but it could have been any other commodity. The main topics: power and control!

Throughout the book, the stakes were high in the effort to establish domination over the riches of the South Seas, including efforts to own the territory and often to expel the natives. The goal of each voyage was to get rich by purchasing spice, especially nutmeg, where it was grown and thus cheap, and then managing to get the ship safely back to Europe where spice was very expensive.

The Nathaniel of the title is Nathaniel Courthope, who played a role in trying to keep the extraordinarily tiny spice island of Run in the Banda Islands from being taken away from the English by the Dutch in the early 1600s. The book covers the entire era beginning in around 1500 and including voyages to many other places (such as Henry Hudson's efforts to find the Northwest Passage to attain the Spice Islands). Thus Nathaniel's role in stubbornly holding onto the tiny nutmeg-producing territory while the Dutch were winning seems pretty minor -- he is a major topic only on pages 271 through 308 (when he is buried). He appears only occasionally in parts of the remainder.

The only way Nathaniel Courthope "changed the course of history" was that by chance, a number of years after his death in 1620, the English ceded all claims to Run and the Bandas in exchange for the Dutch ceding all claims to Manhattan. This was not until 1667. You know why that exchange of islands might be made to look important, but in fact, the division of the world among the Europeans was ongoing at the time, and Nathaniel's last stand was only a part of the causes of this treaty.

The memorable parts of the book, unfortunately, are the parts about suffering. English sailors and traders who sailed  for the South Seas had a small chance of survival. Some made more than one voyage, but they suffered and died in many ways. Death came from scurvy and other diseases; shipwrecks, mutinies, pirates, or just being lost at sea; death in skirmishes with various rival ships or on land; too little to eat and too much alcohol when they could get it; and being imprisoned, tortured, and executed by the other side. The scenes of torture of English traders at the hands of the Dutch are horrific. The treatment of the natives of the islands is horrific.

One problem with reading the book, besides its inclusion of a lot of fairly uninteresting detail along with the good stuff, is that the illustrations are maddeningly placed in the wrong parts of the book. For example, on page 257 is a current photo of what remains of the old Dutch Fort Revenge on one of the islands. The caption quotes the English prisoners whose imprisonment is important -- but doesn't come up until page 293. An illustration about Elizabethan times illustrates text about the year 1611, that is over 100 years later (p. 274). There are too many other examples. It's distracting!

In sum: rather than presenting a biography of an interesting character, as implied by the title, the book is a free-wheeling and rather undisciplined historic description of voyages, of many individuals and their quest for power, and of deeds that seemed great at the time.
Posted by Mae Travels at 9:21 AM

Good to know about the book. When it comes to culinary reading, give me a memoir any day. (I am not much of a history reader although I do greatly enjoy David Kamp's books which are more food oriented than historical probably.)