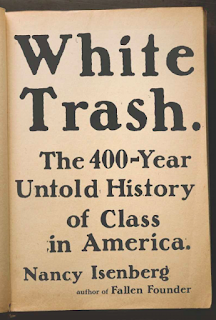 "The underclass exists even when they don’t rise to the level of making trouble, fomenting rebellions, joining in riots, or fleeing the ranks of the Confederacy and hiding out in swamps, where they create an underground economy. Those who do not disappear into the wilderness are present in towns and cities and along paved and unpaved roads in every state. Seeing the poor, whether it is in the photographs of a Walker Evans or a Dorothea Lange, or in comical form on 'reality TV,' we have to wonder how such people exist amid plenty. As she cast her eyes upon southern trailer trash in the middle of World War II, the Washington Post columnist Agnes Meyer asked, 'Is this America?'

"Yes, it is America. It is an essential part of American history. So too is the backlash that occurs when attempts are made to improve the conditions of the poor. Whether it is New Deal polices or LBJ’s welfare programs or Obama-era health care reform, along with any effort to address inequality and poverty comes a harsh and seemingly inevitable reaction." (p. 312)


Nancy Isenberg's recent book White Trash: The 400-Year Untold History of Class in America has received quite a lot of attention since its publication around 2 weeks ago. I thought I would learn from it, so I bought it and have read it. The book begins with the early British colonies long before the American Revolution, and explores the role of the "waste" people, who were often forced to emigrate from Britain as indentured servants or convicts, and who above all never became landowners, but were always without the resources that America promised (and delivered to others).

White Trash explores the attitudes and thought of Benjamin Franklin, Thomas Paine, Thomas Jefferson, Andrew Jackson, Abraham Lincoln, and several other 19th century figures towards class and poverty. It explores the continuation of this class of poor white people during major eras of the twentieth century as well, including both standard historic events and social life, and also popular culture in TV and film as illustrated at left. Though a few individuals from the "white trash" background in each era may have overcome their circumstances, the implication throughout is that the vast majority remained as poor as ever.

Constantly, the reader is told that old myths about a classless American society are untrue, and that other things are true. I have at least two problems with the this revision of history. The first is that I don't know enough history to have a belief in these myths or errors, so nothing seems all that surprising to me. The second is that I constantly think about current events -- things happening right now -- that very strongly resemble the trends that are explored in the book, but I can't quite grasp the significance or make it really meaningful in my own mind. Sometimes I felt as if just rereading the book would make me understand this history better, but now that I've finished I'm not sure this is true.

The New York Times review by Dwight Gardner (published June 21) that got me interested in the book summarized it thus:


America did not develop a House of Lords, yet we imported the rigging of the British class system, Ms. Isenberg argues. This was hardly a land of equal opportunity. Brutal labor awaited most migrants. There was little social mobility.

“Puritan religious faith did not displace class hierarchy, either; the early generations of New Englanders did nothing to diminish, let alone condemn, the routine reliance on servants or slaves,” she observes. “Land was the principal source of wealth, and those without any had little chance to escape servitude. It was the stigma of landlessness that would leave its mark on white trash from this day forward.”

From this beginning, Ms. Isenberg moves confidently forward, through, for example, the class issues that undergirded the Civil War and the popular eugenics movement, favored by Theodore Roosevelt, that marked many as targets for sterilization. Slavery and racism are hardly discounted in this book, but she maintains her focus on poor whites.

And it concluded: "'White Trash' is indeed a bummer, and a thoroughly patriotic one. It deals in the truths that matter, which is to say, the uncomfortable ones."
Posted by Mae Travels at 10:28 PM

I think I just heard an interview with this author in NPR. This book brings up some interesting thoughts.