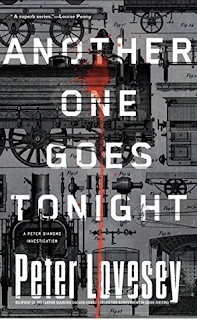 Another One Goes Tonight is the sixteenth book in the series about detective Peter Diamond, published last week. Although I don't remember every plot perfectly, I have in fact read them all. I finished this, the most recent one, today. Author Peter Lovesey has produced another imaginative, unusual, and super suspenseful tale.

Lovesey's detective Peter Diamond quickly suspects that a series of seemingly natural deaths are really due to a serial killer of some type. He knows he's up against a criminal with great cunning and stealth. Because Diamond is only working on a hunch or intuition, he and his two subordinates have to keep their detecting under the radar, and can only sometimes call on the resources of the official police. As a result, he has to be particularly clever: and he is!

Food plays its usual role in the book, as Peter Diamond, an overweight and late-middle-aged man eats what he shouldn't, such as hamburgers, unappealing sandwiches, hearty special breakfasts, and large muffins. A doctor who has given him some important evidence calls him back into her office at one point:

Dr. Mukherjee said, 'Have you had a blood-pressure check lately?'

"'I don’t wish to be personal but your skin colour isn’t too healthy and you’re carrying rather more weight than you should.'

The most ingenious use of food in this novel, however, is impossible for me to tell you without destroying your enjoyment of the clever and suspenseful disclosures of the final pages. So I'll leave it at this: it's the opposite of a cozy mystery where food has all the warm fuzzy feelings of home and security. You don't have to read the first 15 books to enjoy Another One..., and I recommend that you do so!
Posted by Mae Travels at 3:33 PM