What we are watching

"The Ballad of Buster Scruggs"


Another film by the Coen Brothers: "The Ballad of Buster Scruggs." The introductory song, "Cool Clear Water," was an old popular cowboy song, written in the 1930s and popular in the 1940s. It was effectively included in the movie, which is a collection of short episodes about the old west with a talented cast and lots of amusing scenes. We rewatched it a few days ago. It's a lot of fun, especially the first two or three episodes which are pretty much a send-up of classic cowboy movies.

Friday, September 24, at 3 AM the first episode of the 2021 season of the Great British Baking Show was released on Netflix for American viewers. We watched it at around 8:30 AM. It's not that different from the previous 100 or so episodes we have watched over the years, but we like it. We will no doubt be watching every Friday until the last 2021 episode is complete and we know who won. Then we'll forget who won and what they baked, as we have forgotten the details of all the previous seasons. It's delightfully mindless and in-the-moment.
The contestants this year aren't very different from prior years, including traditional British natives and a variety of immigrants to Britain who have adapted to British baking. From the Guardian review of the first episode:

"This time around we have Jürgen, the German IT guy, who brought in nuts, bolts and a spanner to aid him with the final task, and the Italian engineer Giuseppe, whose pronunciation of the phrase Jack and the Beanstalk was sweeter than sugar-cane cannoli. We have Jairzeno the Trinidadian, and Freya, the 19-year-old Scarborough vegan. Amanda is a detective who likes wild swimming; Tom seems like the sort of man who would be at home in a model railway shop. Fortunately, his family runs one." (source)

Full disclosure: I'm not that crazy about eating cake. The Great British Baking Show is all theater to me, and doesn't make me hungry or inspire me to actually perform anything in the kitchen. But as they used to say "There will always be an England." 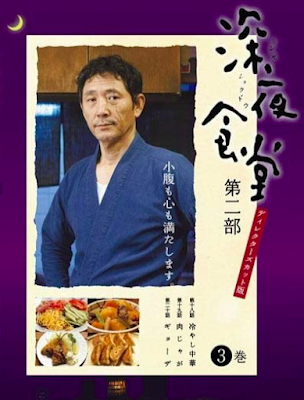 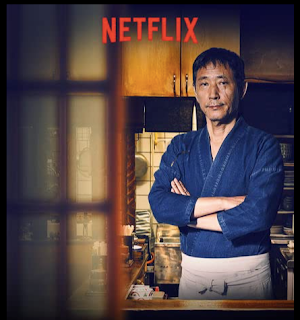 Thanks to a review by the blog Intrepid Reader and Baker (here) I've begun watching the Japanese series "Midnight Diner" on Netflix. It takes place in a diner in Tokyo which opens at midnight, and which is full of colorful night-owls whose favorite foods are made by the diner's cook and only employee (or maybe its owner), known as "the Master." It's a hilariously funny show but you have to let the humor sneak up on you.
I agree with the New Yorker reviewer who wrote:

“Midnight Diner” is the rare show that I love but can’t binge-watch—I need to savor the show’s slow, meditative rhythms. The same goes for the food, which we see the Master prepare, and which always looks delicious. It’s particularly moving when regulars ask him to make their childhood favorites—a reminder of the basic comfort that his diner provides. Nighttime is when feelings of euphoria, or despair, feel particularly acute. Yet there’s a simple pleasure to eating with strangers, and swapping stories, in a small room full of people who can be alone together. (source)

I've watched the first few, and I'll be savoring my way through at least several more episodes pretty soon!

I could've sworn I'd seen that film -the title sounded so familiar- but no. I'll add that Youtube link to my film folder. Thanks!

I _love_ Midnight Diner. I put them on during lunch and began to feel like I really knew these people :)

oops! The Youtube link was the song not the movie lol so it's the Netflix watchlist I'll add it to.

I have always enjoyed the British Baking show but sadly they no longer have it on tv-and we don't do streaming services. enjoyed the song Happy T

We started watching the Buster Scruggs movie but decided we didn't like it so we turned it off.
I skipped what you wrote about the GBBO because I haven't started this season yet and I didn't want to spoil it in case you gave details. We love watching this as a family so we will have to start the new season soon!
I will check out that last show. Sounds interesting!
Thanks for the suggestions!
Happy Tea Day,
Kate

I get old seasons of Te British Baking show, but I don't care for it now that only Paul is familiar to me. I miss Mary Berry.

I've not heard of that Coen Brothers show because I don't get Netflix. Same with the Midnight Diner. Enjoy these food and drink related shows, though, Mae. Thanks for sharing these and reviewing them for us for T this week.

I am very excited to read that the 2021 Great British Baking show has started. I had to interrupt my husband to tell him, because like you, we enjoy watching it. I like it because there a home bakers competing for a cake dish, not professionals for big money like you get on most US cooking/baking shoes. Thanks for the info. I know what we will be putting on once my husband's show is over. Happy T day. hugs-Erika

I have never seen Midnight Diner, but I'm quite familiar with the Great British Baking Show. We saw several seasons, and even though I don't eat much cake either we have always enjoyed the show. Everybody is nicw to each other, no one needs to put anyone down - so different to similar American shows where always someone has to bitch.

We will watch the Great British Bake Off when it airs here so I'm skipping reading about it here so as to not have any spoilers.

We have the noisiest baking show on TV here, I hectically have to switch the channel when I hear her first squeaking sound!
Well, my sweet tooth hybernates most of the time anyways.

I don't know if I watched the film, but I do know the title song, so perhaps I did! I'm not a fan of cook shows, but I like cooking and experimenting! Happy T Day, Valerie

I want to see Midnight Diner as well. Can't wait to watch British Bakeoff. I can stream it through a local network.

Cool, clear water. Wa-TERRR Now I have an earworm for today 😺 I've enjoyed watching the Great British Baking Show all the joy of creating without any of the mess. Midnight Diner sounds intriguing. The Eldest and I used to watch Chopped where chefs got weird ingredients and had to make an appetizer, entrée, and dessert.

I haven’t watched any of the Bake off yet so I also had to skip that part just in case, I love to watch but some things are just too complicated for me, especially cakes. I like Noel, he always makes me smile with his quirky dress sense,
Happy T day
Jan

Fun song to share with us for T-day! I definitely want to watch the Midnight Diner - that sounds special. I have been watching the Halloween Wars baking show - I love how creative they are with pumpkins, cake, cereal and sugar. It is definitely light, easy to binge on, and doesn't make me hungry. I does make me want to do create something fun with food - lol. Happy T-day, Mae!

We'll have to check out Midnight Diner. I think Rick would like that, too. It's Japan, after all! I'm a Baking Show fan -- but I haven't been all that fond of some of the showstopper assignments in recent times. Still, it's always fun to see them and I like seeing how they evolve as they get further on. I just finished rewatching the previous season because you are right. After they win, we usually don't remember who they were. (Except Nadia, because she got her own show!)

We used to watch the GBBO when we lived in the Uk. I loved it, but now Mary Barrie is gone I don’t feel I want to watch it ( if I could,as we don’t have tv) Noel is a creep!
Never heard of the Midnight Diner, but it sounds like something I’d like to watch.
Happy T Day,
Hugs,
Lisca

Great movies and I love the Great British Bake Off too, well I am British ...lol 😉. Happy T Day wishes! Hugs Jo x

I never heard of that show; I will have to look for it. I like mindless shows, LOL. I grew up on westerns because my dad was a western addict. I remember that 'clear water' song. I pushed the watch later button because it wasn't working for me. Thank you for this t post. Happy t day.

I love the British Baking show, mainly because they do it for the prestige not some huge amount of money like the would here in the states. Have a great day.

Hope you enjoy the Bake-Off Mae. It was on the news at the time, that they got everyone to commit to staying together for the whole show so that they could do it properly without masks and social distancing, which was nice I think. Sorry for my lateness, have a sick kitty. Happy T Day! Elle/EOTC xx

'Cool Clear Water' was a favourite of my dad's - don't know who used to sing it.

I stopped watching 'Bake Off' when it changed channels here and Mary Berry stopped being on it.

I'll be looking up Midnight Diner, although of course it may take time to be on here.
Hugs, Chrisx