"It seems that over the last three days they have done nothing but drink tea and watch television. The mere action of filling the kettle is comforting, giving the impression that something, at least, is being achieved. Liquid is reaching boiling point, hot drinks are being made. Setting out the cups, finding sugar for Darren, waiting for the water to boil; in those minutes Cathbad allows himself not to think, except about whether he should bring in a plate of digestives. Even being in a separate room is a relief. The kitchen, with its shiny new cabinets, is pleasantly sterile in contrast to the teeming emotions in the rest of the house." -- Elly Griffiths, The Outcast Dead  (p. 326).

Yes, tea for comfort, tea for distraction from frantic worry, tea to soothe difficult relationships or cement friendly ones. Ruth Galloway, main character of The Outcast Dead, habitually pours herself cups of tea at breakfast with her daughter Kate. After a minor car accident, "she doesn’t want to get into the whole ‘are you all right, have a cup of tea, are you sure you haven’t got whiplash’ thing." (p. 79). Drinking tea with her brother, whom she hasn't seen much of, brings them together. Her feelings about going out in the evening: "Even after a day in the sun, she’s longing to be home with a cup of tea. That’s what being forty-three does to you." (pp. 180-181). In stressful times and relaxed ones, everyone is always offering to make someone a cup of tea.

I'm sure this is very natural and normal for any British mystery series, even though Ruth is a heretic when it comes to certain other institutions -- for instance: "She goes into the kitchen to make breakfast. She’s pretty sure that Simon will expect the full English. It’s a concept which... is almost entirely alien to her."  (p. 257). 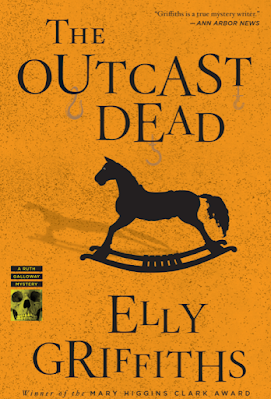 The Outcast Dead is book 6 in the series of police procedurals, featuring Ruth Galloway, a forensic archaeologist in a small town in England. Like books 1 through 5 in the series, this one offers lots of suspense and a continuation of building the complicated lives and relationships of Ruth, her one-time lover Nelson (a policeman), other members of the police force, the egocentric head of Ruth's academic department, and the druid, born Michael, whose chosen name is Cathbad. As usual, several different crimes have occurred, and the police are investigating. Meanwhile Ruth is engaged in a professional dig that comes to the attention of a popular TV series, and she also helps the police to solve the crimes. There's a bit too much violence for this series to be classified as a pure cozy mystery, but it sure has plenty of tea.

Mystery author Elly Griffiths has written many more Ruth Galloway books, and other mysteries as well. I suspect I'll be reading more of them, as they are very lighthearted and amusing -- including the constant drinking of tea, which I'm sure will continue to occur on many occasions, as it was also drunk in books 1 through 6.

I enjoy this series very much. The only problem is I am waiting for another book to come out. SMILE! Hope you have a great new week, and glad you enjoyed the book. Did you enjoy a cup of tea while you read it?

Much to my surprise, our local library carries 12 Elly Griffiths, Ruth Galloway mysteries. Sadly the one you just read is not on the list. Of course, this one struck me because it had a rocking horse on the cover. I'd get this for the cover along (grin). Forget tea, think rocking horses (grin)!

Sounds like an interesting read. I haven't heard of this one.
Happy Tea Day,
Kate

Thanks a bunch for sharing this book with us for T this week, too, dear Mae.

sounds like n interesting book series. Thanks for sharing, and happy T day!

So far I have read three books in this series. I mainly started reading it because the setting is in Norfolk, a region in England that I love very much. It's more of a melancholy landscape which really fits these books.

I love all of the Ellie Griffiths books! I grew up in England, but we never did full English breaksfasts! Happy T Day, Valerie

Happy T-day, Mae. This sounds like a book that I would totally love! A mystery, british culture, scatterbrained characters, and talk of tea and food - what more could you want? TFS! Hugz

Sounds like a good read with a nice cup of tea. Happy T Day

That sounds like a book I would read. I have read one of the series (The Janus Stone) and I liked it very much. I prefer British mysteries as it is a culture that we are familiar with. American culture is so different (if crime books are a reflection of american culture. That is probably debatable)
I think I'll go and make myself a cup of tea!
Happy T-Day,
Hugs,
Lisca

The books sound so interesting, thanks for the recommendation 😀. Take care and wishing you a Happy T Day! Hugs Jo x

I will add this author and series to my list to read! Thanks for the heads up about it. I drink a lot of tea. I will probably pour tea every time they do! LOL Happy T Day!

I wonder if tea is more comforting than other hot drinks. I've tried tea and I don't remember receiving that sort of feeling, but perhaps I tried the wrong kind.

I used to read a lot of mystery/thriller fiction, mainly back in the days when I traveled a lot and wanted quick, undemanding reads (although the best of this genre can actually require quite a bit of attention). I've gotten away from that, although in the last few years I've dabbled in this genre again. Kind of getting the itch to read a bathtub full of this type of book again, and this series sounds quite promising. :-) Nice post -- thanks.

It's a joy to find a good series, because you know the pleasure will last through the rest of the books.

I like this series also, and of course we sure do drink a lot of tea over here. I was watching some older shows on catch-up and the volume of tea made in them was incredible lol. Happy belated T day Elle/EOTC xx

I really love this series - have read this one and a couple of others and hope to get my hands on more. Ruth Galloway is a great character and it is interesting to see her child growing in the series as well as the world she lives in changing.