The Nature of the Future: Not Good 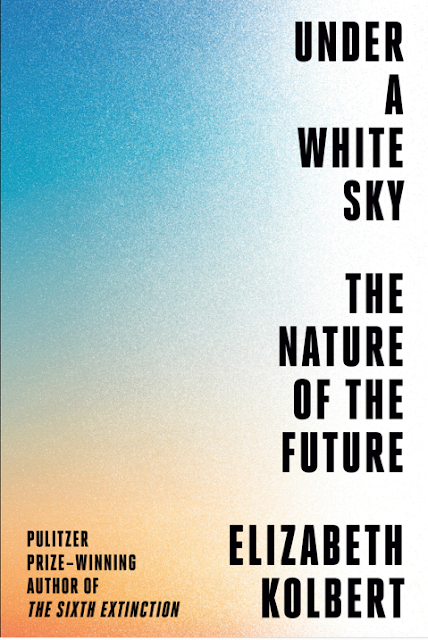 I hated reading this wonderful and enlightening book. The consequences of human action are too terrible to contemplate.  The most well-meaning interventions that humans have tried, following the best science that they could muster, often turn out to be disasters. An introduced predator eats the wrong target prey. Efforts to protect the Great Lakes create bigger problems than the ones they were meant to address. Pumping water out of a flood zone makes the land subside and thus flood more dangerously.  One good choice doesn't lead to another, they all go wrong!

Kolbert's research for this book was interrupted by the pandemic. It's the first book I've read that mentions the pandemic and its various effects -- I'm now waiting for pandemic fiction! About this, she writes:

"I was contemplating another trip ... when COVID-19 hit. Suddenly everyone’s plans were upended, including my own. As borders closed and flights were canceled, travel to the ice sheet—or, for that matter, pretty much anywhere—became impractical. Here I was, trying to finish a book about the world spinning out of control, only to find the world spinning so far out of control that I couldn’t finish the book." (pp. 197-198).

There's not much amusing about a world spinning out of control, but Kolbert makes it very slightly amusing by comparing missed opportunities and botched fix-ups to great literature. I leave you with this:

"The reasoning behind 'genetic rescue' is the sort responsible for many a world-altering screwup. (See, for example, Asian carp and cane toads.) The history of biological interventions designed to correct for previous biological interventions reads like Dr. Seuss’s The Cat in the Hat Comes Back, in which the Cat, after eating cake in the bathtub, is asked to clean up after himself:

All the planet’s disasters and the inevitable doomsday predictions have been on my mind anyway. Kolbert’s book touches on all of them, and by going into very specific details about little organisms made extinct by one thing or another, she shows how small events are heading us for catastrophe.

Some parts of life are hard to bear, read or hear about. I get what you are saying, although I have not read this book.

"Do you know how he did it?
WITH MOTHER’S WHITE DRESS!
Now the tub was all clean,
But her dress was a mess."

This type of book shows that man should leave well enough alone. We've learnt the lesson the hard way here with drought and fires worsened due to alien trees.

We are our own worst enemies when it comes to climate and the environment. You make me want to find and read this book, Mae. It sounds read worthy.

This sounds really good. Thanks for sharing. Have a great day, Valerie

I hadn't thought of pandemic fiction, but yeah, it's coming. This sounds like an excellent book. Depressing, but excellent. Thanks.

It's all such a mess :( Down here you'd think we'd take a look around, see all the kudzu, and swear never to do that again.

You are brave to read Kolbert's doomsday books ... I guess they are very good but I can not go there. Just too much to worry about.