"Ghost Wall," A Book of Abuse

"There are no surprises. They place another rope around her neck, hold the knife up to the setting sun as it edges behind the rocks. What is necessary is on hand, the sharpened willow withies, the pile of stones, the small blades and the large. The stick for twisting the rope.

"Not yet. There is an art to holding her in the place she is entering now, on the edge of the water-earth, in the time and space between life and death, too late to return to the living and not time, not yet, not for a while, to be quite dead." Sarah Moss, Ghost Wall (p. 4). 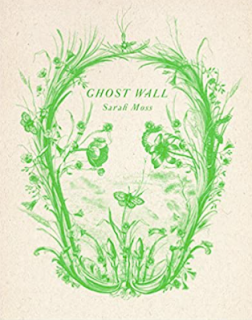 This very frightening book begins with a human sacrifice. Throughout the book, you are wondering how this starting point will become an ending point. The initial chapter, written in an omniscient voice, describes the girl who is sacrificed in front of a crowd: "her neighbours and her family, ... the people who held her hands as she learnt to walk, taught her to dip her bread in the pot and wipe her lips, to weave a basket and gut a fish. She has played with the children who now peep at her from behind their mothers, has murmured prayers for them as they were being born." (p. 4).

After this grizzly description, the narration of Sarah Moss's amazing novella Ghost Wall is done by a young modern girl, Silvie. She and her parents are engaged in an anthropologist-professor's reenactment of life in the Iron Age in the north of Britain, along with some of the professor's students, including Molly, a woman who has her own ideas of how to cope with these very odd circumstances. Molly isn't nearly as committed to Iron Age life as the others: when she should be gathering wild foods, she sneaks off to a shop that sells sweets, snacks, and ice cream, and she finds a way to have a hot shower and wash her hair, which the reenactment doesn't allow.

Yes, here I am reading one more book that features anthropology, and again, it's totally different from the books I was talking about yesterday (posted here).

Silvie's father is a bus driver and her mother works as a grocery-store checkout clerk, but her father is obsessed with learning about Iron Age living. In fact he's a British chauvinist who thinks the Iron Age inhabitants of Britain were the real deal, as opposed to immigrants throughout history. His disapproval covers these interlopers: including the Roman legionnaires, who may have brought African people with them, and of course despising much more recent newcomers from around the globe. Thanks to her father's focus on Iron Age life and purity, he has forced them to spend the family vacation living painfully in the woods without plumbing or other conveniences.

While Silvie's father, a dreadful abuser of his wife and daughter, is having fun, he insists that the three women -- Silvie, her mother, and Molly -- do all the painful Iron-Age labor of gathering roots and berries in the woods, building fires, and preparing unfamiliar foods with the tools he thinks are appropriate, like flint knives. All the inconveniences and challenges of this life are described with great vividness, which is why this book is so readable despite the cruelty. As one reviewer stated it:

"Silvie is alive to nature, and fascinated by the mummified bog people unearthed in that part of the country. But she chafes against her father’s manifold rules for historical authenticity. He longs to re-create a past when, as he imagines, 'women managed well enough' toiling in submission, and true Britons had not yet been corrupted by foreign elements." (source)

Silvie lives in utter dread of her father, who beats her brutally when he feels put down by anyone. Both she and her mother have all the victim response of fear and self-blame. If I tell you more, it will be a spoiler!

BUT I LOVE SPOILERS!!! What a cruel and unrelenting man and a sad, unusual book. Torture has never been something I appreciate, and I detest bullies, who come in all shapes, forms, and sizes.

Wow, it sure sounds interesting Mae. Anthropology - I am trying to think if I've ever read any book with anthropology as an underlying theme.
What will be your best recommendation?

I hope they escape! Or give the father payback?! Sarah Moss is talented .... I look forward to seeing what her next book will be.

This sounds far too abusive for me to read in my current state of mind. I'm blessed to live with modern conveniences. The shower being the most necessary one in my opinion.

This sounds like one of those hard-to-read books that nevertheless rewards a reading.