Poets in the Neighborhood

Several famous poets have lived in Ann Arbor and taught at the University of Michigan. Three of them in particular lived in my neighborhood, and I like to think about them when I pass their one-time homes. Here are some biographical details about the poets and their presence in my neighborhood. In order to make this a manageable post, I'm not going to talk about any of their actual poetry -- though it's wonderful! 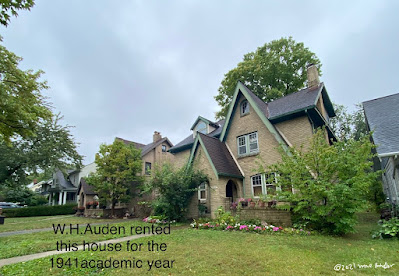 W. H. Auden taught at the University of Michigan during the 1941-1942 academic year. At the beginning of this time, Auden lived in a house on the site that had formerly hosted the poet Robert Frost, who had briefly visited the University in the 1920s. The Robert Frost Ann Arbor house had been moved to Greenfield Village, where Henry Ford had a collection of important American-historical buildings, so it is very well-known but also it's not in Ann Arbor any more.
During the latter part of the 1941-1942 academic year, Auden and  his lover, the poet Chester Kallman (1921-1975), then a graduate student at the university, lived a block down the street from my current home. They sublet a house from a professor who was on sabbatical as often happens in university towns. I very frequently walk past this house, and think about the two poets and what living here may have been like in the 1940s. Probably not that different from what it's like now -- you can walk through the nearby park and continue to the campus in around 25 minutes, which is what they no doubt did.
Rumors in the neighborhood claim that Auden and Kallman were highly unsatisfactory sabbatical-year tenants for a respectable professor's home, and that they did not leave the house in good condition. Obviously by the time I heard people talking about this, virtually no one still had first-hand memories of these famous renters, but I did find a little information by diligently googling:


"Much to the chagrin of their neighbors as well as the campus authorities, Auden and Kallman hosted regular 'At Homes.' Unfortunately, Auden’s only literary record of the group, a masque that Auden wrote for his guests to perform at one of the 'At Homes,' no longer exists: 'The Queen’s Masque, by Bojo the Homo, played by Kallman’s Klever Kompanions.' Auden described it as 'really obscene,' and reacted to the disappearance of the manuscript by saying, 'I do hope the F.B.I. hasn’t been prying up here.'" (source)

I believe that several Auden biographies offer more details about Auden's life in Ann Arbor, but I'm not into such a big research project right now. So I've offered you some 80-year-old gossip. 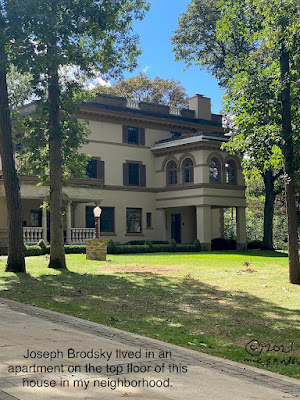 Joseph Brodsky was a Russian poet who was severely mistreated by the Communist regime in his early years, and when he was forced to leave the Soviet Union, he began his exile in Ann Arbor, where he was appointed as a poetry lecturer. The University of Michigan Slavic Languages Department website describes his arrival thus:

"The crucial link between Brodsky and the U-M was the late Carl R. Proffer, professor of Russian Literature. Proffer and his wife Ellendea were co-founders of Ardis Press, which had published a number of Brodsky's works. He happened to be in Leningrad visiting Brodsky in May, 1972, when the poet received notification from the authorities that he was being issued an exit visa for emigration to Israel. After responding that he was not interested in leaving his native land and culture, Brodsky was warned that the coming winter would be very cold — a threat that was not lost on a man who had been convicted of 'social parasitism' for living on his poetry and had served a stretch in exile working on a collective farm in the Russian far north. He decided to discuss the matter with his American friend, and Proffer, in his optimistic way, told Brodsky that he could come and teach in Ann Arbor. Brodsky accepted the idea, and Proffer contacted Benjamin Stolz, who at the time chaired the Department of Slavic Languages & Literatures. After receiving authorization to hire Brodsky, Stolz obtained an immigration visa personally approved by William Rogers, Secretary of State, and flew to Chicago to get a federal work permit." (source)

Auden has also been given credit for assisting Brodsky to come to Michigan:

"Auden was instrumental in bringing Joseph Brodsky to Ann Arbor for a teaching position in 1972 when the Soviet Union cast him out as a danger to the State. In 1987 when Brodsky was no longer in residence at Michigan (alas!), he was awarded the Nobel Prize for Literature and in 1991 he was appointed Poet Laureate of the United States." (source)

For part of the time he was here in Ann Arbor, Brodsky rented an apartment on the top floor of a very impressive home just up the street from my house. I also walk past there often, in the opposite direction from the house where Auden had lived. Very recently, this house was completely renovated and enlarged, so it is much grander-looking than it was back then -- I once was inside it on a home tour and I think I even saw the apartment where Brodsky had formerly lived. 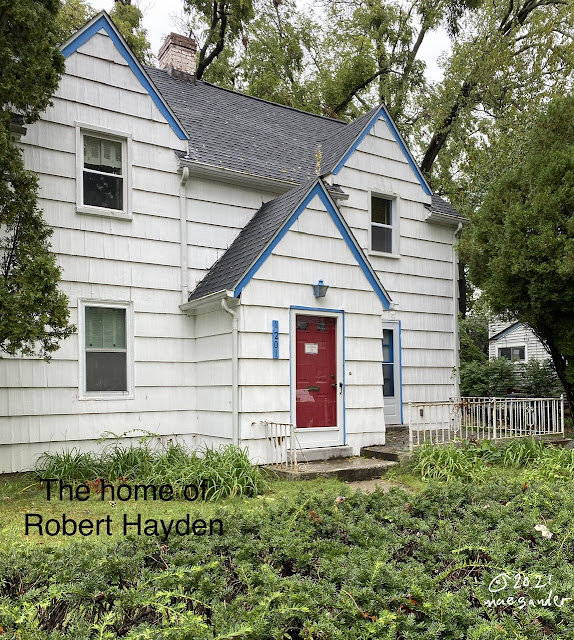 Robert Hayden is considered one of the great Black American poets. A native of Detroit, he was an undergraduate at Detroit City College, now Wayne State University. He did graduate work at the University of Michigan, and received a master's degree in 1944. While studying at Michigan, he was especially encouraged by Auden, who was then teaching at the university. After teaching at Fisk University for a number of years, Hayden became a professor in the Michigan English Department, where he taught from 1969 until his death in 1980.

During the time he taught in Ann Arbor, Hayden lived a few blocks from my current home, and only one block from the house where I lived at that time. I remember seeing him and sometimes briefly talking to him when he was walking his dog around the block. His dog was named Sadie, and he told me "Sadie is a lady." At that time, I had read some of his poetry, and knew his very esteemed reputation, but of course never mentioned it in our very brief conversations.

"Hayden lived at 1201 Gardner Avenue, not far from campus; however, his severe nearsightedness made it impossible for him to drive, or even walk the rutted sidewalks to work. As a result, Hayden regularly took the Ann Arbor Transportation Authority's #5 bus that ran along Packard Street. It was short ride between the Congregational Church on State Street near campus and the intersection of Gardner and Packard. From there, he had a quick walk home, along a sidewalk bordered with hedges and lilac bushes." (source)

Recently, the Ann Arbor City Council voted to establish a committee to consider granting special historical status to the house on Gardner, in honor of Hayden and his contribution to the university. (source)

That's a variety of architectural style! It's interesting to hear how life has both changed and remained the same over the years.

The last house appeals to me the most. I like the threat: the coming winter would be very cold. Right now I would use it if it had the same meaning here.

I guess I'm not surprised -- the U attracts some of the best talent! But having seen your neighborhood I know why they would want to live there -- it's wonderful, good walking, fabulous older homes with charm and character (though probably not so old back then!) The Auden story greatly amused me!

I enjoyed reading about Hayden and contribution to the university. I was delighted to read about Auden and the gossip that must have followed him and his lover. I love the house where Brodsky rented the top floor. I could live there for sure.

How fascinating that your neighborhood housed such esteemed writers. It's especially intriguing to think that you had occasional conversations with Robert Hayden.

In general, celebrities are not something I seek out, but celebrity authors are an exception.

i love Auden, and I loved this post. We have done several " literary " vacations in the past lol

Here is my link:
https://twogirlsandtheirbookishlife.blogspot.com/2021/10/sunday-salon-sukkot-and-art-deco.html

What a lovely neighbourhood!
Auden is the only one I’m familiar with, but poetry is no really an interest of mine.

Very neat that you live in the same neighborhood as they did!

Wow!!! What a gorgeous neighborhood you live in! I have to say I like the last house the best. Thanks for sharing!

It must be so wonderful to visit homes of famous poets and writers, even if they were bad tenants! Michigan is a wonderful state for so many arts; I was lucky enough to attend Interlochen National Music camp in my youth, and adored Traverse City (especially during the Cherry Festival). Thanks for such an educational post.

Wow! Really interesting posts on these poets. What a fantastic area to live in. Thanks so much for sharing this.

How interesting to be able to walk by the houses of these great writers! I have liked everything I have read by Auden and want to read more.

Have a great week!

What an interesting post! And what an honor to live in a neighborhood with such a rich history.