"There are not two Germanies, a bad one and a good one, but only one, in which the best qualities have been corrupted with diabolical cunning into evil. The evil Germany is the good one in misfortune and guilt, the good Germany perverted and overthrown." (Thomas Mann, lecture, 1945, cited in Colm Tóibín, The Magician, pp 406-407)

Thomas Mann (1875-1955) is a fascinating author and public figure. He became a successful writer quite early in life with his famous book Buddenbrooks, published in 1901. He was a leading thinker as well as the author of several more novels, for which he won the Nobel Prize for literature in 1929. During the rise of the Nazis he was cautiously in opposition to them, which increased as they took power, and by 1933 his life was in danger. He spent the Nazi years after 1933 in exile from Germany, first in Switzerland, then, during the war, in the United States, where he wrote the novel Dr. Faustus. (I read it recently: blogged here.) Mann never returned to live in Germany, and died in his final exile home, Switzerland. 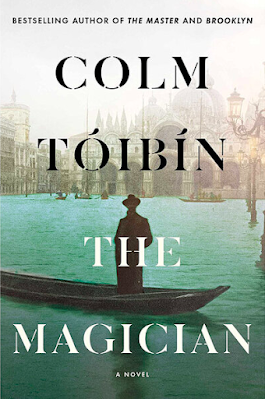 Colm Tóibín's novelized biography of Thomas Mann, published September 7, is titled The Magician. It reads more like a biography than like a novel because it lacks the type of focus that one expects in actual fiction: it begins with Mann's childhood and proceeds chronologically through his life until the end. It covers his parents and grandparents, his sisters and brother (himself a well-known author), his wife and her family, many of his friends and contacts, his children, and his writing.

Tóibín's approach is to dramatize the events and relationships of Mann's life through imagined conversations -- or maybe conversations discovered in diaries and letters of the participants. As you read these vivid conversations, you can never lose sight of Mann's major life focus on writing novels, essays, and speeches, but there is really less about the actual content of his works than I would have expected. Despite Mann's reputation and success as a novelist, much of the novel's focus is on his family life, and often on his rivalry with his brother Heinrich Mann (1871-1950). During World War I, Thomas Mann was a German patriot and supporter, while Heinrich opposed the war. Later, in the 1920s and 1930s, politics came to dominate life in Germany, especially in Munich where Mann lived at the time. Tóibín showed how the author resisted making committed statements, and how he quarreled about politics and commitment with his two oldest children, who were flamboyantly anti-Nazi. Eventually, reluctantly, he left his home -- or rather, never returned from a vacation in 1933, when his life was threatened by the Nazis.

The political tensions and the way that Mann adapted to living as a German -- a very famous German -- in prewar and wartime America -- is the part of the book I found most fascinating. Mann's encounters with prominent Americans, including Eleanor Roosevelt and many others, were depicted in detail. His life in California, along with many other German exiles, was an especially intriguing part of Tóibín's presentation. Despite the fictional nature of the novel, I think these interactions were probably portrayed with accuracy and based on good sources, but of course there's no way to know, and there's nothing in Tóibín's novel that explains his sources or methods, just a list of books he used. Maybe this is a flaw: I would like to know, but I'm not about to consult those sources or try to become an expert.

The Washington Post reviewer recently called The Magician "an incisive and witty novel that shows what good company the Nobelist and his family might have been." (source) The novel also showed how Mann's success affected the people closest to him. He was at best a challenging father and brother, and at worst highly destructive, especially to his oldest son, Klaus Mann (1906-1949) who had aspirations as a writer, and succeeded for a while, but was unable to keep going. Klaus's eventual suicide in his early 40s was a crucial event in the book. Similarly, the early success of Mann's brother Heinrich Mann ended half a century later in disillusionment and poverty, with Heinrich -- whose novels were out of print and who failed as a writer in Hollywood -- overshadowed by Thomas Mann's popularity with American readers. For Klaus and all of Mann's family, the disaster of Nazi takeover in Germany forced them to flee to new and alien environments -- mostly in the US. The loss of their native land was also a major contributing factor in their failure, in contrast to Thomas Mann's ability to adapt to the new situation.

Above all Tóibín's novel is a study of identity, including Mann's identity as a German, his consciousness of the changes in what it meant to be German, his identity as a writer, as a family man and a husband, as a very closeted gay man, as an exile, and as a political figure, though Mann never wanted to be one. He comes to see Mann as a Magician in many senses of the word. All very complex.

The Magician is a book that I’ve been keeping my eye on. Do I want to read it now after reading your thorough review? I’m leaning toward no. Perhaps I need to read a Mann novel first, and then I will see if I want to press on.

What a thoughtful and insightful review, Mae. I've been hearing quite a bit about this one. Now I'm even more intrigued.

I've not seen this in my last of books to review. I was unaware Mann was gay and wonder what role that played in his life?

I've seen a couple other blogger friends have reviewed this book, but not to the same detail as you. This sounds quite impressive, although I'm not especially sure I would want to read it. You did a great job reviewing it, however. I'll check to see if our library has it.

Thanks for this review. I’m not sure the book is translated in French

He sure was ahead of his time and an interesting man.

So would you say you liked the book? I recall thinking Mann's book Death in Venice seemed a pretty gay story ... but perhaps I'm wrong ?

I have this on my to read list on Goodreads but I see it won't be the same as his previous books I enjoyed such as Brooklyn and Nora Webster. Did you like it?

Sounds like a fascinating read. I imagine having some familiarity with the author's work would add to the reading of this book. Thanks for the review.

Have a good week!

Not sure this book is for me, but I do love that cover! One of the best I've ever seen!