Colson Whitehead's newest book (published in August) is Harlem Shuffle, the adventures of Ray Carney, a resident of Harlem. The three sections of the book take place in 1959, 1961, and 1964. As far as I can tell, Whitehead gets all the details of that era in Harlem -- and in the USA -- right. These details of Carney's picaresque life, and that of his even more criminal cousin Freddie make it a fun book to read: Movies. Food. Diners. Traffic. Danger. Robbing a hotel safe. The ever-changing streets of Harlem and New York City. Apartments good and bad. Furniture...

Wait, why furniture? Because Carney is the owner of a furniture store: a good businessman, improving his business in each of the three sections of the book. In addition, Carney's a good family man, very fond of Elizabeth, his faithful wife, who works as a travel agent specializing in creating safe itineraries for black people who want to avoid hotels and towns where they will be turned away or put in danger. Ray and Elizabeth have two beloved children named May and John, and an idealized home life (except that Ray is often out). Unfortunately, Ray Carney is also a crook, participating in a variety of thefts and cons in cooperation with Freddie and several lowlifes that he knows, some of them former associates of his late father, who was also a crook. Well, if he had just been a decent stay-at-home family man it would have been a rather boring book.

Discrimination and various prejudices against people of color seems to be the one part of popular culture in the book that's virtually unchanged until now, maybe excepting the denial of hotel or dining accommodations. Futile actions against inequality, such as the protests and sit-ins of the 1960s, seem all too similar to what's happened recently (lots of words, not much change). The characters in the book live with the institutional biases against them, and deal with the inequality they experience, but their lives proceed anyway. This is in extreme contrast to the horrendous result of discrimination described in Whitehead's earlier book The Nickel Boys. That was a very sad book (blogged here). This one is not so sad, but still enlightening. 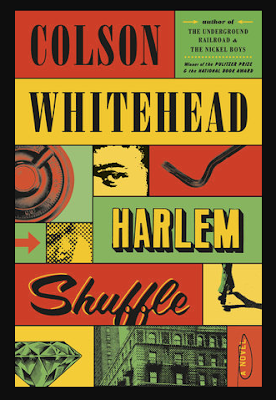 It's a good story, wonderfully told. Whitehead's descriptive abilities are a joy to read. I loved being immersed in both the plot and the many descriptive details. As always, I cultivate awareness of how authors use food to create atmosphere in a book. Whitehead is especially wonderful at spinning out analogies between food and other things going on. Some examples of food in the novel:
At a Chinese restaurant  "There was a fish tank with greenish water over by the kitchen door. Something moved inside it. Red-and-orange dragons writhed on the wallpaper, roiling like clouds....The cookies were stale and the fortunes discouraging." (pp 85-86)
A family memory, and a lesson, from a petty crook called Pepper:

"His grandpa Alfred had kept a steel-drum smoker out back in Newark, on Clinton Ave. He'd do ribs, brisket, make his own sausage. Grandpa Alfred's father had been a butcher and cook on an indigo plantation in South Carolina and passed down the mysteries. 'You throw chops on some coals,' Pepper's grandfather said, 'that's one way to cook a piece of meat. Few minutes later, you got that black on it, you're done. But barbecue is slow. Put it in that smoke, you got to be ready to wait. That heat and smoke is going to do its work, boy, but you got to wait.'

"One was fast and one was slow, and it was the sane for stickups and stakeouts. Stickups were chops -- they cook fast and hot, your'e in and out. A stakeout was ribs -- fire down low, slow, taking your time." (p. 175)

Characterizing a diner: "Sometimes when Carney jumped into the Hudson when he was a kid, some of that stuff got into his mouth. The Big Apple Diner served it up and called it coffee." (p. 175)

Two criminals called Bumpy and Chink cultivated a perhaps-undeservedly favorable public opinion: "Take the publicity trick with the hams. Bumpy had started the Christmas good-will giveaway, handing out turkeys to the Harlem needy from the back of a truck. Chink followed suit, tossing out free hams the day before Easter, sometimes to people who were unaware that he'd killed their husband or son. Or were too hungry to care." (p 226)

A man who cooperates with the police against the mob, just wanting to do his civic duty, disappeared: "Washes up in New Jersey three weeks later, throat cut so bad his head is barely hanging on. Like a Pez dispenser." (p. 244)

Finally, a very long interchange about Carney's cousin Freddie's experience during the riots in 1964 that followed the police murder of a young, innocent, unarmed Harlem boy. This really shows Whitehead's writing power to use food to illustrate a point:

"'It was nine o'clock,' Freddie said. 'I get out of the subway to look for a sandwich and the streets are full of people. Raising their fists, waving signs. Chanting, "We want Malcolm X! We Want Malcolm X!" and "Killer cops must go!" ... I'm hungry. I don't want to deal with all that. I'm trying to get a sandwich....

"Freddie followed the crowd to the station house on 123rd, where a CORE field secretary with dark horn-rimmed glasses and a red bow tie listed demands: Police Commissioner Murphy must resign; set up the long-requested civilian review board...

""This old lady elbows me in the stomach, we're packed in. Hot. All these angry Negroes in one place, and they are pissed -- but all I want is a sandwich. I start heading back up to 125th and people are all buzzing, saying the police have beat up and arrested some CORE people. That was that! Boom -- it was on... Rocking cars throwing shit through windows.

"'I'm like, how am I going to get my sandwich in all this mess?

"'On 125th, everybody's closed or closing up early because of the unrest. That Cuban place with the pickle they put on the meat is closed. Jimmy's, the Coronet's got its lights out. That's when I really got hungry -- you know how you want something more when you know you ain't going to get it? Negroes are wrapping chains around those security gates and then pulling the gates off with their cars. Then they break the glass and step inside. I'm a simple man. Put something between two slices and I'm happy. But how am I supposed to get a motherfucking sandwich with all that going on? People running up and down, screaming. I'm like, damn, this riot stuff will cramp a brother's style.'

"Freddie had no recourse but to split uptown and hit Gracie's Diner. 'Got my ass a turkey sandwich, finally. And it was good too. But that was some wild shit, man.'" (pp 217-219)

When I wrote about Whitehead's earlier book (here), I said "Clearly the twenty-first-century reader is challenged to question how much progress we've made to date, in achieving the vision of a better society." While this book is much gentler than The Nickel Boys, the challenge is still here.

Good review. Sounds like good to read. Have a wonderful day.

From your excerpts it sounds like a wonderfully descriptive book and well written.

Somehow it never ends, this struggle.
And yet now I want a sandwich...

Super review -- I haven't read this, but you've really captured a nice image of the book. Sounds like my kind of read -- thanks.

Little has changed since 1964. I thought maybe George Floyd's murder had changed things a bit, but it seems we have forgotten all that with the voting rights problems we are having in GA and TX today. You gave a really great review Mae. I was immersed in your poor guy who just wanted a sandwich.

Wow seems like a lot of mentions of food in this novel. Are the many characters hard to keep track of? It sounds like you enjoyed its story. I liked The Nickel Boys but it was quite harsh ... the ending was very well done.

This author sounds familiar, but I know I haven't read this. It sounds interesting. I'm making a list for when I'm ready to go back to the library. Thanks!