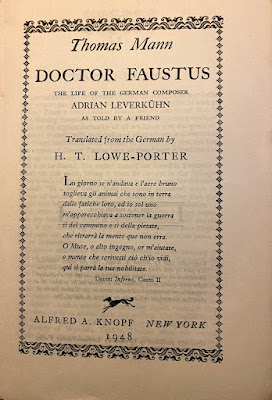 Thomas Mann's famous novel Dr. Faustus, published in German in 1947, is usually described as the story of Adrian Leverkühn, a German composer of great genius, who sells his soul to the devil in exchange for 24 years of brilliant musical production. Adrian, born in 1885, was a near-contemporary of Mann (1875-1955), and his life paralleled the dramatic events of the early twentieth century. Sometimes the novel is described as an allegory of the fall of German culture, an allegory of the Nazi project and its downfall, or as a critique of German bourgeois life, but that's oversimplifying, in my opinion.

The narrator of Dr. Faustus is Adrian's childhood friend, Serenus Zeitblom, a modest man who presents himself as a simple biographer, putting together the important facts of his famous friend's life and work. Serenus often says "this is not a novel," but of course it's a novel! And the reader has to try to understand both characters: the narrator and his subject, to see what Thomas Mann was doing. Serenus isn't exactly an unreliable narrator -- maybe he's too reliable, too detailed, too apologetic and self-effacing, too insistent on his unworthiness. But in any case, it's a novel about two men, not a biography of one man.

Narrator Serenus, who lived in Germany, began his biographical task after Adrian's death in 1940, and his writing takes place during the worst times of World War II. He is highly aware of the significance of the advancing armies that are conquering Germany as he is writing. His narrative dwells constantly on German choices, German responsibility, and German shame: his word. He's humiliated at the failure of German culture: and German culture is a major theme of his narrative. It's not evident that Adrian was particularly aware of these events, and in any case Adrian's conscious life ended in the early 1930s. As a result there's a kind of tension between the political consciousness in the two intellectual lives intertwined in the novel.

Many features of Adrian's life and work are of great interest to Serenus. In particular, the novel includes very detailed information about Adrian's musical theories and his compositions. At one point, music is described as a kind of direct link to thought and mind, a kind of pure abstraction. Obviously, the book can't include actual music that the reader can hear. Thus, the music in the novel really is mental only, though it has been identified with the 12-tone works of contemporary composers, particularly Arnold Schoenberg. Most of Adrian's music is vocal music, including settings of poems by famous German poets, operas and oratorios based on Shakespeare's work, and the like. These textual references also help to bring the non-existent music to life.

Just half-way through the novel, there's a long chapter detailing Adrian's encounter with the devil. The devil is a very vivid character who radiates penetrating cold and speaks in a very eerie way. This chapter is presented as a document written by Adrian himself. Serenus doesn't speculate as to whether Adrian's experience with the devil is real or entirely in his head, though Adrian (both at that time and later) is completely convinced of the objective existence of the devil and his bargain. The complete lack of speculation about this reality is one of the interesting characteristics of Serenus as a narrator.

Thomas Mann was indisputably a fantastic writer, especially an observer of incredible detail. I was amazed at his descriptions of faces, that made me able to image the individuals that he was describing, and even of his characterization of certain pet dogs that were present in the lives of the characters. I was bothered by some of the stereotyping of women and especially of Jewish people, which I found a bit dated and uncomfortable. However, I see that these features are meant to characterize the rather oblivious Serenus, not necessarily to reflect Mann's own thinking.

As always, I look for descriptions of food in a novel, and there were several passages where food was used to characterize a household or a person. For example, at the beginning of the book, Adrian's mother  offers visitors "the grainy dark bread with fresh butter, the golden honey in the comb, the delicious strawberries in cream, the curds in blue bowls sprinkled with black bread-crumbs and sugar." (p. 11-12) Later, the landlady with whom Adrian was to live most of his productive life "promised him light diet, milk, eggs, toast, vegetable soup, a good red beefsteak with spinach at midday, and afterwards a medium-sized omelet, with apple sauce -- in short, things that were nourishing and agreeable to a delicate stomach like his." (p. 256)

Why did I read this novel? I chose to read it because I'm planning to read Colm Tóibín’s new novel, The Magician, which is a fictionalized biography of Thomas Mann. As the amazon review of Tóibín’s book says: "The Magician is an intimate, astonishingly complex portrait of Mann, his magnificent and complex wife Katia, and the times in which they lived—the first world war, the rise of Hitler, World War II, the Cold War, and exile." I decided to read something by Mann himself before I read the novel. This is the second time I have read Dr. Faustus, both times reading the English-language edition from 1948, which originally belonged to my father. (I probably should have made the effort to get a later, and better, translation.)

Here's something puzzling: when it was first published, Dr. Faustus was a selection of the Book-of-the-Month Club (though my father's copy seems to have been a regular commercial edition). It's hard for me to imagine the mainstream and not very intellectual subscribers of this "Book Club" at that time dealing with this ponderous book, but maybe it was simply chosen because of Mann's reputation and fame -- he had won the 1929 Nobel Prize for literature, and was admired for his politics and for fleeing Nazi Germany. The New York Times review from October, 1948, remarked: "Members of the Book-of-the-Month Club, whose co-selection for November it is, are in for a shock when they tackle 'Doctor Faustus.'" (source)

I like how you read Dr. Faustus in preparation for reading The Magician. That's how I like to read. It makes the reading experience a rich one.

The plot of Dr. Faustus is intriguing. What would you sacrifice for your art? I can see how it might be seen that this story is an allegory of the fall of German culture, and it's interesting that you think the story is more complex than that.

Book-of-the-Month, in its early iteration, surprisingly, was a source of good books for the masses. Kristin Lavransdatter...All Quiet on the Western Front...Claudius the God...Native Son...all of these were Book-of-the-Month Club selections.

The selections from the Book-of-the-Month from years ago sound more intellectual than they would be now. Young p
My husband may have had some T. Mann books in GA, I’ll have to look as there are still thousand of books on shelves. Frankly, I have not been interested in the soul of Germany or a desire to learn about Germany. My grandfather was born in Alsace when it was German, and spoke the language – and was very anti-German, so maybe this had something to do with it. My grandfather cooked various types of sausages and sauerkraut, but did not call it German food, but Alsatian. I enjoyed reading your report on the book though.

I just saw that part of my sentence was eaten up, it should have said “Young people don’t read heavy books unless they have to for school assignment I think.”

I've heard of Mann, but no nothing about his work. I'm beginning to believe literature is my weakest subject!

I think it's so special to read your Father's copy!

I've only read this once and that was decades ago. Well worth reading, though.