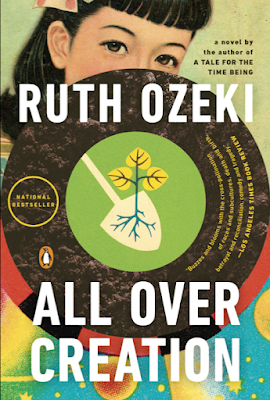 Before reading Ruth Ozeki's new book The Book of Form and Emptiness, I decided to read an old one, from 2003 titled All Over Creation. I don't know why I didn't read it earlier, as I read and liked My Year of Meats, her first novel, and read and liked A Tale for the Time Being, her third novel as well.
All Over Creation is an ambitious but flawed book. Like My Year of Meats, it tells the story of farm families who are caught in the trap of choosing to grow genetically modified and other chemically altered crops or choosing less artificial ways to farm. The book is set on an Idaho potato farm in the late 1990s. At that time, many of these issues were really on people's minds, as they still are now.
As Ozeki's farmer-characters succeed and acquire more land, they are more and more pressured to purchase altered seeds and cuttings to fill their vast fields. In this book, the dilemma is: do they plant potatoes that have built-in insecticide? Or do they spray large amounts of commercial insecticides? Or can they find a better way entirely?
The characters tend to resemble the types of a morality play, with everyone designed to embody a message, even when they are individualized. A dying man, once a large-scale farmer, has been converted to the rightness of natural farming, and makes meaningful and poignant speeches about his belief. His wife, who came to Idaho as a Japanese war bride, grows and sells heirloom seeds, and talks to her plants with stereotyped Japanese insights. Their daughter, who ran away at age 14, has just returned to see them one more time, and is discovering her true identity. A group of protestors living in a trailer create theatrical events to call attention to the problems of pesticide and other evils in the food supply. Several articulate children play a role: I found the portrayal of these children especially annoying because they seemed to be too perfect in expressing the author’s message. Aging Flower Children, who had been idealist hippies during the sixties but have sold out their ideals, play a role in the many complications and dramas in the book.
I found it readable but contrived. Unfortunately, the issues raised in the book are worse than ever. I hope I like the new book better!
Blog post © 2021.
Posted by Mae Travels at 11:12 AM

This is the first I've heard about Ozeki's new novel! Not sure how I missed that. I really enjoyed My Year of Meats and, to a lesser extent, All Over Creation on audio. Still haven't gotten around to A Tale for the Time Being but I do plan to read it.

Oh, such a wise book review. I do hope the latter one is better, too.

I haven't read anything by Ozeki. I hope you enjoy her newer book better.

Sounds interesting. I hope you like the new book.

The thought of plants with built in pesticide bothers me. Shanah tova to you and your family.

I've never heard of Ozeki, but it DOES sound like a morality play to me. It appears to raise a dilemma that may be talked about for ages, and yet, never completely solved. I enjoyed your honest review, though.

Too many books. Too little time!

I've only read A Tale for the Time-Being, and I found it to be a clever and surprising story with deeply real characters, an astonishingly good read.

I really love your book review.

Her new book sounds a bit different and long too. I liked her Tale for the Time Being novel ... but I'm a bit on the fence about her new one. You can vet it for us. :-)