Recently, a friend asked me to recommend some regional French cookbooks. I found quite a few books about the cuisine of Provence and southern France, but quite a few regions are missing from my collection. To be thorough I would need to find cookbooks that featured the Basque region, Normandy, Brittany (especially for crepes!), Lyons, Alsace (especially recipes for the famous choucroute), and several other regions. My favorite regional French recipes are for Gratin Dauphinois (blogged here) and Salade Niçoise (blogged here), but these are now so popular that you can find recipes in a variety of cookbooks and online sources, and you can order them at many American restaurants as well.

As I looked through my shelves I did find quite a few relevant cookbooks. I've written about many of them before, over my years of blogging. Here's a list of my books that emphasize French regional cooking, with links to previous posts. This list reflects only books that I own, so it's not meant to be comprehensive or systematic in any way. 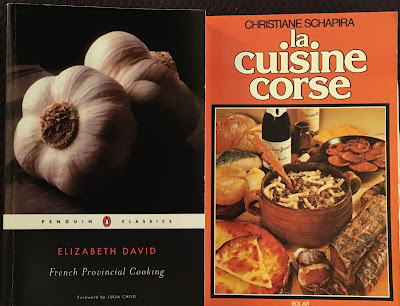 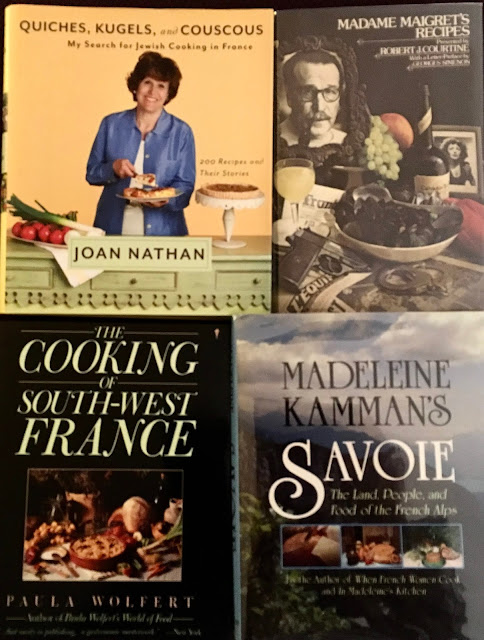 ... of course, if you want to know everything, you can always consult the Larousse Gastronomique!

French food has always been Americans' model of quality and excellence starting when Benjamin Franklin and Thomas Jefferson described it to their fellow citizens. French cooking, both in restaurants and homes, has reflected an identity of its own in the US. In particular, we have not been as conscious of French regional differences as French people are. In the late 20th century, Julia Child made a big difference both to Americans' cooking and awareness of French food; since her peak of influence, many English-language works have appeared in books, magazine articles, TV programs, and online, and I would say that French regional cuisine is of increasing interest.

I am so into the Maigret books. I don't read in order but I love them all and can't wait to see the new series with Rowan Atkinson as Maigret. Not my visual of him but we'll see! So, of COURSE I want to check that one out and will return soon to your blog on that one.

Thanks for all the list. They do look wonderful. And if that glorious spread on your other post was any indication, the recipes work!