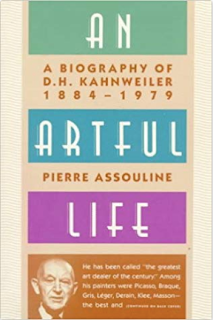 Picasso and the cubist movement of the early 20th century have always fascinated me. I particularly enjoyed the two Picasso and cubism exhibits I visited in Paris recently (details here). Therefore, I decided to read about the art dealer Daniel-Henry Kahnweiler, who recognized the genius of these artists and promoted and supported their work when they were unknown and unappreciated, as well as later when they became famous. Kahnweiler was an art lover, and a discerning critic. He wrote about art in several books and articles, as well as making visionary choices of art and artists.

An Artful Life: A Biography of D. H. Kahnweiler 1884-1979 by Pierre Assouline (published in French in 1988, translation 1990) offers a detailed portrait of this insightful and imaginative art dealer. Kahnweiler was born in Germany, and was expected to spend his life in the business world of his father, uncles, and other relatives, who had businesses in Germany, England, and South Africa. However, at the age of 23, he convinced them to give him a chance to go to Paris with enough capital to set up an art gallery: a business that he continued throughout his long life. Particularly after World War II, Kahnweiler became an authoritative and widely respected figure in the art world.

From the beginning, Kahnweiler's approach to working with artists was generous and fair. His gallery showed only the work of artists with whom he had an exclusive relationship. That is, they sold their entire artistic production through his gallery, sometimes with exceptions for illustrations for books and a few other types of work. He didn't speculate or buy and sell the works of already famous artists, but worked with young and upcoming talent. He had several partners during the many years he ran the gallery, and his long-term relationships with them also appear to have been exceptionally open and cordial.

In exchange for representing the artists in his gallery, Kahnweiler paid a set price for each painting or print they delivered, based mainly on the size of the work. Also, he paid them a stipend each month as an advance against future sales. This was extremely important to some of the artists that he recognized early in their careers, who were often living and working in extreme poverty.

Over time, some of the artists quarreled with him over the arrangement, or tried to sell to rival dealers -- who often offered more money -- in violation of the arrangement. In particular, Kahnweiler was always negotiating with Picasso until much later when Picasso was famous and successful and Kahnweiler became his truly exclusive dealer. Kahnweiler was also very honest and fair with his clients, who included many famous art collectors including Gertrude Stein and her brothers, who are famous for having recognized Picasso and his contemporaries from their start: their start with Kahnweiler.


Throughout the book we learn of the relationship between Kahnweiler and the artists as well as with other dealers, critics, and art collectors. Besides selling art in his gallery, he also published small art books containing the work of various modern poets and illustrated by his artists. Thus he was the first to publish any work of Gertrude Stein!

His standards of honesty were strict. For example:


"Critics were often related by bonds of friendship, if not more, to dealers and artists. Some even turned curator to mount exhibitions, even though they might have been on the payroll of a gallery ... or simply affiliated with a movement, so that it was impossible not to think that they were all more or less subject to influence. ... The standard advice to young artists was 'To become well known in the Heaven of the Arts (by God, the art dealer, and his saints, the art critics), address your prayers to the saints rather than to God.'

"Kahnweiler was not surprised by these practices as he had no illusions about the manner in which the French made their adjustments to deontology." (p. 59-61)

Deontology -- a new word to me -- is an ethical theory that uses rules to distinguish right from wrong.


Kahnweiler was important and at times influential, but still led a fairly quiet and non-public life. As a result, one of the elements of the biography that I find really interesting is Pierre Assouline's descriptions of how the huge events of his time affected him. Because the biography is in chronological order, we read these events as they happened, and thus in my view, the author enables us to live through them as if we were present in history.

Kahnweiler had a peaceful feeling before World War I; he had no idea that war was about to break out. He suffered from the impact of the war, which forced him into exile in Switzerland and almost destroyed his business. He also suffered from the vindictiveness of the French after the war. He adapted to the twenties and then to the barren times of the Depression. During the rise of the Nazis, his relatives had to flee from Germany. Kahnweiler was more prepared to protect his art assets as World War II began, but he spent the war in hiding in the French countryside, and as a Jew, was of course terribly threatened.

Assouline says surprisingly little about the fate of the rest of the Jewish population of France, though he does describe how much art was scooped up and sent to the collections of high Nazi officials. I sometimes felt as if Assouline was avoiding the thought of the treatment of Jews in occupied France, but I don't want to try to analyze this. He describes Kahnweiler's identity as a very assimilated and non-religious Jew, who seemed to have little connection to the Jewish communities of Paris.

Reading of these events as they affected one particular man offers an interesting history lesson. I felt as if it made first half of the 20th century in Paris come to life in a very interesting way. Though I have lived in quieter times, I've often read about the Depression and the wars, and this was an interesting set of very specific examples. I was especially interested in the Sunday afternoon parties that Kahnweiler and his wife held, where many famous people enjoyed their hospitality -- including Gertrude Stein and Alice Toklas, and many others. I was somewhat frustrated that Assouline included almost nothing about Kahnweiler's wife, except to note that he was devoted to her and devastated by her death in the 1940s.

One of the interesting features of both wars was that in Paris itself, there was still an undercurrent of normality in the art business, with artists still painting and paintings still being sold. Kahnweiler's gallery in fact was normal during World War II because he sold it to his wife's sister, who was not Jewish, and she continued to run it as he had done in the past.


After each war, Kahnweiler was challenged to restore his position in the art world. During World War I, the French government confiscated Kahnweiler's entire inventory of cubist paintings by the artists he represented: the government seized all assets of German citizens. After the war, from 1921-1923, Kahnweiler was unable to recover the work, which was put up for sale at auction, and sold at below its value. Several of his colleagues participated in the sale in ways that were viewed as unethical.

One of the most complicit and self-interested in helping with this sale was another dealer, Léonce Rosenberg, who stood to profit from his betrayal. Rosenberg once said to Kahnweiler, "All this is good publicity for the cubists. It's one compensation for your losses."

"'I am too cast down by the misfortune that has befallen me to see it in such an objective manner,' Kahnweiler answered with is consummate sense of litotes." (p. 174)

Litotes -- a new word to me for Wordy Wednesday! -- refers to ironic understatement in which an affirmative is expressed by the negative of its contrary (e.g., you won't be sorry, meaning you'll be glad).

In order to read this book, I think it helps to be particularly interested in the Paris art world of the first half of the twentieth century, to be able to picture many of the art works that are discussed, and to some extent to know a bit about Paris geography and locales. When I read about the specific cafés and Paris neighborhoods where the various artists, critics, and others lived and worked, I could recall how these places still appear in present-day Paris. Having just been there, this was very vivid for me.

Reading this made me interested in the topic of art dealers and World War II -- tomorrow I will post about a biography of Paul Rosenberg, a rival of Kahnweiler.
Posted by Mae Travels at 6:30 AM

Superb review. I don't think I've heard about Kahnweiler, or if I have, I've forgotten. Interesting to learn that he introduced the Steins to Picasso's works.And yeah, deontology is a new word for me, too. Fascinating post -- thanks.

I love art and know just how important the right dealer can be. This book sounds fascinating. Great find word wise too!