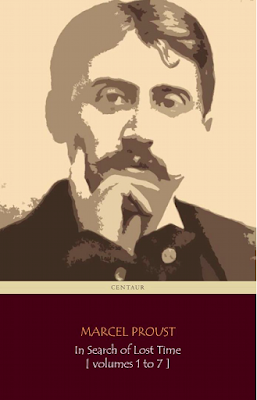 Marcel Proust's famous multi-volume book, À la recherche du temps perdu, is now known in English by the name In Search of Lost Time; it was originally translated as Remembrance of Things Past. After reading a book about the three Parisian women who inspired one of Proust's characters (blogged here), I decided to tackle this reading challenge -- in translation, of course. The word count for the entire work is 1,267,069 -- according to a google search, that is. Proust's prose is famously dense and difficult to read. He wrote some of the longest sentences I've ever seen. In contrast to this behemoth, for example, the entire Harry Potter series contains 1,084,170 words, and is written at a young person's reading level.

I started with the first volume, Swann's Way, and took my time, finishing it in several days. In a few places I found it a bit tedious, but mostly I enjoyed reading it and enjoyed Proust's penetrating interest in a variety of human experiences, especially his best-known studies of how memory operates.

You may be aware of the most famous passage in the book, where Proust's narrator and alter-ego dips a madeleine in his tea, and the taste and aroma take him back to his childhood. I suspect that another 1,267,069 words have been written about this famous passage. In fact, one time when we were buying madeleines in a plastic box at Costco, the check-out clerk said something to us about Proust. (OK, Ann Arbor is a pretty intellectual place, but still...)

One of many things that impressed me as I mentioned, is the study of sensory memory experiences in many passages throughout Swann's Way -- not just the famous one. I was fascinated by the constant explorations of memory and its relation to all of the senses, but especially taste and smell. No doubt this continues through the later volumes as well, though I have not read them recently: I did many years ago. I might continue with this reading project, but I'm not sure.

Because so much has been written about Proust and memory, I decided to simply quote a few of the most striking passages that fascinated me as I read.

"When, before turning to leave the church, I made a genuflection before the altar, I felt suddenly, as I rose again, a bitter-sweet fragrance of almonds steal towards me from the hawthorn-blossom, and I then noticed that on the flowers themselves were little spots of a creamier colour, in which I imagined that this fragrance must lie concealed, as the taste of an almond cake lay in the burned parts, or the sweetness of Mlle. Vinteuil’s cheeks beneath their freckles. Despite the heavy, motionless silence of the hawthorns, these gusts of fragrance came to me like the murmuring of an intense vitality, with which the whole altar was quivering like a roadside hedge explored by living antennae, of which I was reminded by seeing some stamens, almost red in colour, which seemed to have kept the springtime virulence, the irritant power of stinging insects now transmuted into flowers." Marcel Proust. In Search of Lost Time (Kindle Locations 2087-2093).

"And for my own part I set a higher value on cream cheese when it was pink, when I had been allowed to tinge it with crushed strawberries. And these flowers had chosen precisely the colour of some edible and delicious thing, or of some exquisite addition to one’s costume for a great festival, which colours, inasmuch as they make plain the reason for their superiority, are those whose beauty is most evident to the eyes of children, and for that reason must always seem more vivid and more natural than any other tints, even after the child’s mind has realised that they offer no gratification to the appetite, and have not been selected by the dressmaker." (Kindle Locations 2585-2590).

"We would sit down among the irises at the water’s edge. In the holiday sky a lazy cloud streamed out to its full length. Now and then, crushed by the burden of idleness, a carp would heave up out of the water, with an anxious gasp. It was time for us to feed. Before starting homewards we would sit for a long time there, eating fruit and bread and chocolate, on the grass, over which came to our ears, horizontal, faint, but solid still and metallic, the sound of the bells of Saint-Hilaire, which had melted not at all in the atmosphere it was so well accustomed to traverse, but, broken piecemeal by the successive palpitation of all their sonorous strokes, throbbed as it brushed the flowers at our feet."(Kindle Locations 3155-3159).

And the last lines of Swann's Way:


"The places that we have known belong now only to the little world of space on which we map them for our own convenience. None of them was ever more than a thin slice, held between the contiguous impressions that composed our life at that time; remembrance of a particular form is but regret for a particular moment; and houses, roads, avenues are as fugitive, alas, as the years." (Kindle Locations 7887-7890).

I will never, ever get through this! I will not begin. But I have to say the passages you quoted are beautiful.

As for the madeleines, well, it's one of my favorite things to make and this year I'm adding them to all my cookie plates. Thing is, they really need to be served up fresh, so they'll be the last things I make and then deliver fast!

I'm so impressed when someone reads a book like this. I'm intimidated by it because I feel sure it would be over my head.

Mercy, that's quite a project to read that. Good passage from it though and good looking Madeleines too!

I've never read Proust. I'm sure I'll get around to him one of these days, although there is SO MUCH good stuff to read! Madeleines are wonderful, aren't they? Mrs KR makes a superb version -- we always have it on our list of stuff to blog, but never get around to it. Thanks for the push in that direction. :-)

Now I know what madeleines are! The memory and smell is a crazy thing, so interwoven. It happened to me a couple of times, too.
My respect, I never read Proust (so far?).

I’m with BetmudaOnion, I feel it’s so over my head, loved the passages you quoted. You certainly can picture the scenes.

I made Madeleines once and some turned out well but others burned. So I mentioned that on Twitter as I wanted advice. Do you know David Lebovitz replied to me? That was so cool to exchange two simple cooking tweets with him.

Perhaps after the holiday season I will have time for some serious reading.