"The Idiot" by Elif Batuman

"Spiderwebs attached themselves, like long trails of agglutinative suffixes, onto our arms and faces." 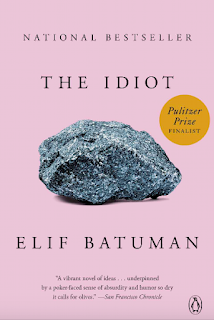 In her novel The Idiot, writer Elif Batuman loves linguistics. The sentence above, which occurs near the end of the book, is the only simile I've ever seen that uses a linguistic concept that way.  In The Idiot, a young woman, Selim, narrates the story of her first year at Harvard, and her following summer in Hungary. Quite near the beginning of the book, she describes her choice of courses for the year, especially a linguistics course:


I went to Linguistics 101, to see what linguistics was about. It was about how language was a biological faculty, hardwired into the brain— infinite, regenerative, never the same twice. The highest law, higher than Holy Scripture, was “the intuition of a native speaker,” a law you couldn’t find in any grammar book or program into any computer. Maybe that was what I wanted to learn.

As she describes her circumstances, her roommates, the people she meets, and so on, she also tells about her linguistics class, listing quite a few topics:


We learned that, because language was a universal human instinct, no human was bad at grammar— not even toddlers or black people. That’s what the book said: you might think that toddlers and black people had no grammar, but if you analyzed their utterances, they were actually following grammatical rules so sophisticated that they couldn’t be programmed into any computer.

A very important part of the class: "We learned about the Sapir-Whorf hypothesis, which said that the language you spoke affected how you processed reality." Processing reality and using languages easily is in fact a major theme of the book. Selim constantly meets people with different native languages, and constantly deals with her own background: she was brought up in America by native speakers of Turkish, and often had visited her relatives in Turkey. In addition, she describes the varied linguistic backgrounds of the students in her Russian class.

As she proceeds through the semester, she feels she needs more:


Something basic about language had started to escape me. I thought I could fix it by taking classes. I signed up for a seminar on the philosophy of language. The point of the seminar turned out to be to come up with a theory such that, if a Martian read it, the Martian would understand what it is that we know when we know a language. To cover all the bases, I also signed up for a class on psycholinguistics.

By the following summer, Selim, who has been trying to understand something elusive about language goes to Hungary. She's supposed to teach English to villagers, but she's constantly looking for similarities between Turkish and Hungarian language usage. She also becomes somewhat fascinated by phrase books such as one that "translated between Russian, Esperanto, Hungarian, German, and English." Some of the phrases: “We would like to know more about the rest cures (sanatoriums) of your country.” “We would like to talk to the workers.” “I am a Communist (Socialist, Democrat, Liberal).” “I am an atheist (Catholic, Protestant, Jew, Muslim).” “I would like to see this lathe more closely.”

Looking as I always do at the way authors use food in their novels was also an interesting part of reading this book, as food works throughout the book in a similar way to language -- defining reality and embedding reality. For example, a fellow student at Harvard, Svetlana, was Russian, and takes Selim to a Russian deli:


Bells rang when we opened the shop door, and then the smell of salami and smoked fish hit us in the face like a curtain. Two clerks, one fat and one thin, stood behind a glass counter.

It was interesting to see so many Russian things: hard and soft cheeses, red and black caviar, stuffed cabbage, bliny, piroshki, pickled mushrooms, pickled herrings, a muddy tank of carp that were alive, but perhaps only barely, and a barrel full of challenging-looking rectangular sweets, in wrappers printed with sentimental Cyrillic writing and pictures of squirrels. There was a whole aisle in the dry-goods section devoted to Turkish products: Koska halvah, Tat pepper paste, Tamek rose-petal jam and canned grape leaves, and Eti biscuits.

Eti meant Hittite— there had been a commercial when I was little with children chanting, “Hittite, Hittite, Hittite.” The Hittites had been beloved by all Turkish children, because Atatürk said the Turks were descended from them and that’s why it was okay for Anatolia to be the Turkish homeland. ...

It turned out that Svetlana knew all these brands, because they had had them in Belgrade, and that the words for eggplant, bean, chickpea, and sour cherry were the same in Serbo-Croatian as in Turkish. “It stands to reason,” she said, “since the Turks occupied Serbia for practically four hundred years.” I nodded as if I knew what she was talking about.

In Hungary the following summer, Selim is constantly invited to people's houses. Her experiences are somewhat strange; frequently the topic is both food and language in one way or another. Like this:

Conversation at dinner circled around the ambiguous nomenclature of seasonal barleys. Gyula’s mother brought out an apple strudel and poured us all brandy. I drank the brandy because it was less trouble than explaining about not drinking it. On the way out, she pressed something warm, heavy, and yielding into my hands. It was wrapped in foil but it felt alive. It was another strudel.

I've now presented the parts of the book that I found amusing and interesting. Unfortunately, it's pretty long: maybe twice as long as it should be, and tedious in parts. I've read some pretty good articles by  Elif Batuman, who writes for the New Yorker, but I was somewhat disappointed in this novel. It was a contender for the Pulitzer Prize so I must be missing something: maybe I just don't really like books about the first year of college of a narrator (or the alter-ego of the author).
Posted by Mae Travels at 6:42 AM