“To be cheated, fooled, bamboozled, cajoled, deceived, pettifogged, demagogued, hypnotized, manicured and chiropodized are privileges dear to us all.” -- Harvey Washington Wiley, quoted in The Poison Squad, p. 52.

“Whenever a food is debased in order to make it cheap, the laboring man pays more for any given nourishment than the rich man does who buys the pure food.” -- Harvey Washington Wiley, quoted p. 230. 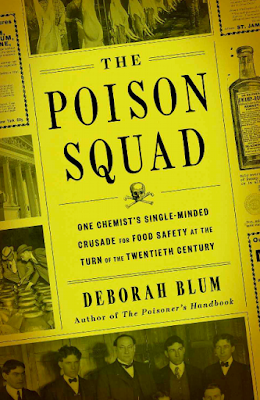 Deborah Blum's book, The Poison Squad: One Chemist's Single-Minded Crusade for Food Safety at the Turn of the Twentieth Century, presents the life, accomplishments, and political experiences of Harvey Washington Wiley (1844-1930), chief chemist of the US Department of Agriculture. Blum highlights the uncanny resemblance between food politics now and then, particularly during the presidency of Theodore Roosevelt (in office from 1901-1909). After many years of government employment, Wiley founded the test labs of Better Homes and Gardens and created their famous "seal of approval."

At our regular, once-a-month meeting of the culinary history reading group, my friends discussed this book along with many issues that it brought up. The four of us who had read it agreed that it was a very good read!

A few comments from our discussion:

Celeste said: "The book made me feel like we were living through that time." She expressed her shock at some of the abuses as well: "Who would poison cake frostings?"

Dan said about the repetition of history: "It's really discouraging: a vicious cycle, a debilitating cycle. For example, the suppression of the papers that Wiley's team wrote. Beyond food contamination, look at the efforts today to destroy the EPA."

Gene said: "It's all about freedom of choice vs. regulation: it took a while for the government to struggle with  the idea of regulating commerce. The American ideal of freedom had to be lined up with the way that regulation could be beneficial, to get away from the idea that cleaner food would ruin American business. Roosevelt didn't have a problem with big business, and had to understand the danger of allowing them total freedom."

Here are some big examples of the events in Harvey Wiley's career that have uncanny parallels to modern food politics:


From our discussion, a summary of the main theme of the book: this is about the tragedy of the commons, the conflict of freedom with the idea of the common good. As always, I'm grateful to Gene Alloway of Motte and Bailey Books for sponsoring this great group and leading our discussions!
Posted by Mae Travels at 10:29 AM

This one sounds intriguing. I'd not heard of it before (no big surprise there!) but I wonder if my BC might find it interesting. They're a very political group and we all cook!

New to me too. Merry Christmas. Cheers from Carole's Chatter