A quiet dinner with word study

We didn't go to Florida as planned for this weekend. 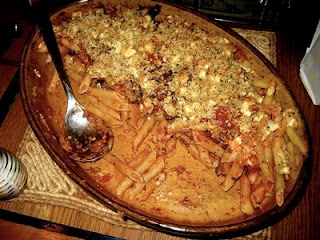 Going on an airplane with a cold? No. We had to wish Jack happy birthday by phone.

So we had a quiet dinner. A pasta casserole with goat cheese and breadcrumb topping. And some blueberries (not quite satisfactory winter ones) and very good shortbread cookies from Whole Foods.

That's when it got interesting. We began wondering why "short pastry" means pastry having a lot of fat, and why "shortening" means fat of all kinds, as in strawberry shortcake, shortnin' bread, or vegetable shortening.

I googled and found a lot of people speculating that shortening refers to the effect of fat on the molecular gluten chains in pastry. The chemical process during the rise and kneading of dough is to form molecular chains that create the texture of bread; with fat present the gluten supposedly forms shorter chains, which changes the texture of the pastry. This explanation of the term short is an obvious anachronism: shortening is an old term, knowledge of gluten molecules comes from modern chemistry. I read more.

McGee's On Food and Cooking says the term shortening has been used since the early 19th century "to mean fats or oils added to baked goods that supposedly 'shorten' or break up masses of gluten, thus weakening the structure and making the final product more tender." (p. 302) McGee says that the repeated folding and rolling of dough with butter between the layers results in "a stack of separated flakes rather than an integrated, breadlike matrix." However, he doesn't really try to explain why the term short is used or where it originated; he focuses on the role of shortening -- liquid or solid -- in bread dough and cake batter.

A more historically oriented write up of the term was in a blog post: The origins of shortening? This traces the use of the word short back several hundred years. The post quotes the following dictionary definition of the word short:

Of edible substances: Friable, easily crumbled. Phrase, to eat short: to break up or crumble in the mouth. a. of crust, pastry, etc. Cf. SHORTBREAD, SHORTCAKE, SHORT CRUST.

In other dictionary examples given, short just means fat, as "1648 GAGE West Ind. 143 This is the Venison of America, whereof I have sometimes eaten, and found it white and short."

The conclusion: the usage of short and shortening for fat in pastry has been used for centuries, and arose from the meaning crumbly, first applied to the ingredient that created crumbly or flaky pastry, later expanded to mean all fats. The recently-described molecular process might create short gluten chains -- McGee, however, says the process isn't well understood, undermining this claim.
Posted by Mae Travels at 7:40 PM

Simply fascinating Mae. I just LOVE this post. I'm going to save it. I just know I will need it as a reference eventually.

It was actually a perfect companion to National Shortbread Day which I think was yesterday!!!

P.S. I couldn't resist paying way to much for blueberries yesterday. Gee, I hope they're good:) Feel better, Louise

Really interesting. SO, if I find an old recipe with shortning, do I have to use Crisco? What about lard? Can I replace with butter?

Louise -- I had no idea it was National Shortbread Day. I just thought it looked good.

Jeanie -- I think the term "shortening" does sometimes stand in for vegetable shortening, but it could also mean any solid shortening. Crisco was invented around 100 years ago, so it depends how old your recipe is. I think the three are almost interchangeable but give very subtly different results. And of course the health evaluation of the three keeps shifting around.